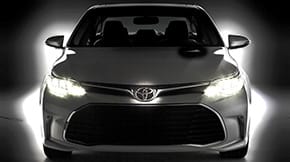 Toyota has quite the party ready for the upcoming Chicago Auto Show with the unveiling of some colorful Special Edition versions the Camry and Corolla to go along with the biggest piece of news, a refresh for the Avalon. The company didn't announce any specific info about the updated sedan but did release this dark teaser image, which we lightened (pictured right) to show off more detail. The stylists seemingly tweaked the higher portion of the grille, while giving the lower section a wide-open mouth.

After the Camry's 2015 refresh, the popular sedan now has sharper, somewhat more aggressive styling, and this Special Edition based on the SE trim leans into that demeanor even more. Limited to 12,000 units starting in August, power still comes from a 2.5-liter four-cylinder rated at 178 horsepower and 170 pound-feet of torque with a six-speed automatic, but Toyota tries make it look a meaner, including 18-inch wheels with black highlights, smoked taillights and a choice of either Blizzard Pearl or Blue Streak Metallic paint. The interior changes are more thorough, with black bolsters and blue centers for the seats, plus matching cerulean highlights for the instruments and trim. Buyers also get a few luxuries inside with an Entune Audio Plus stereo, push-button start and moonroof. Navigation is optional.

Where the Camry has a blue theme, the Corolla Special Edition goes crimson for its limit of 8,000 units beginning in August. Based on the S Plus trim, exterior upgrades are limited to a set of gloss black 17-inch wheels and a choice of Absolutely Red, Black Sand Pearl or Super White paint. There are a few more updates inside, with red stitching and accents for the seats, dashboard and door trim. These models also get push-button start, but an improved audio system with navigation and power moonroof are optional.

CHICAGO, Feb. 5, 2015 - - Winds of change will be blowing into the Chicago Auto Show. Toyota's Camry mid-size sedan, the best-selling car in America for the past 13 years, and Corolla compact sedan, the world's best-selling car of all time, will debut special edition models at next week's Chicago Auto Show. The debuts will be part of a press conference that will also feature a refreshed Avalon sedan.

When redesigning the Camry for 2015, Toyota went bumper to bumper and floor to roof, changing or re-engineering nearly 2,000 parts. Only the roof remained unchanged, and it capped off the boldest Camry ever. Now, only one year after this major redesign, America's best-selling car will offer the 2016 Camry Special Edition for owner's looking for an extra dose of both aggressiveness and technology. Based on the youthful Camry SE, the limited production Camry will add sporty interior and exterior features. In addition to features found on the Camry SE, standard equipment on the Special Edition will include:

Production of the Camry Special Edition will be limited to approximately 12,000 units and will run from August 2015 to January 2016.

The iconic Toyota Corolla is the world's best-selling name plate of all-time with over 40 million sold since 1966. With its all-new 11th generation introduced in 2014, the current Corolla is the roomiest and most fuel-efficient ever.

Corolla will add more driving excitement with the launch of the 2016 Corolla Special Edition. Sporty styling features, inside and out, complement a spirited driving experience made possible with steering wheel paddle shifters, rear disc brakes and Sport Driving Mode along with an array of additional standard features.

Based on the sporty Corolla S Plus grade, the 2016 Corolla Special Edition will turn heads as it adds:

Toyota's EntuneTM Premium Audio with Navigation and App Suite and power tilt/slide moonroof will be available as options.

The Corolla Special Edition will be produced between August and December 2015 and will be limited to 8,000 units.

In addition to the Camry and Corolla Special Editions, Toyota will unveil the refreshed 2016 Avalon premium mid-size sedan during a press conference in the Toyota display at Chicago's McCormick Place on Thursday, Feb. 12 at 2:30 p.m. CST.