Why is Tesla getting more and more secretive?

Jonathon Ramsey
Tesla's unorthodox vision and the even more unorthodox means it is using to achieve that vision have made it what it is: a tiny company with an overachieving product and an oversized stock valuation and voice in the global EV discussion. However, one of its unorthodox practices has been giving investors pause for a year now: not divulging information in its quarterly reports that could be taken as adverse developments. An article in Seeking Alpha called " The Incredible Shrinking Tesla Disclosure" lays out the timelines and details to support one analyst's suspicions for why Tesla will no longer say how many reservations it has, how many cars it's building, and where those cars are going.

The company has never reported sales by month, not in the US or any other market. However, for more than two years it provided the number of reservations it had, but stopped that practice in Q1 of 2013 after it revamped its reservation process to allow prospective buyers to customize a Model S in three steps and place a non-binding order, rather than place their names on a list. The change meant, to Tesla, that the new reservations numbers wouldn't accurately correspond to the previous numbers, so they disappeared to be replaced by general numbers preceded by phrases like "were over" or "up from about." Yet Tesla still calls that three-stop process "a reservation" and continues to give them general numbers, and those numbers have gone down. Analysts take that as one instance of Tesla going dark when a metric heads down.

Then, again after years of doing so, the company stopped reporting deliveries by market. Instead of investors and analysts getting a breakout of how many cars went to each market - the US, Europe, the Asia-Pacific - Tesla only provided a global delivery number, which Tesla says is how many cars were delivered to customers. Observers, having tried to parse the numbers and detected a downturn in US sales, and knowing China is missing its targets, said this was the second instance of Tesla getting quiet about numbers it didn't like. 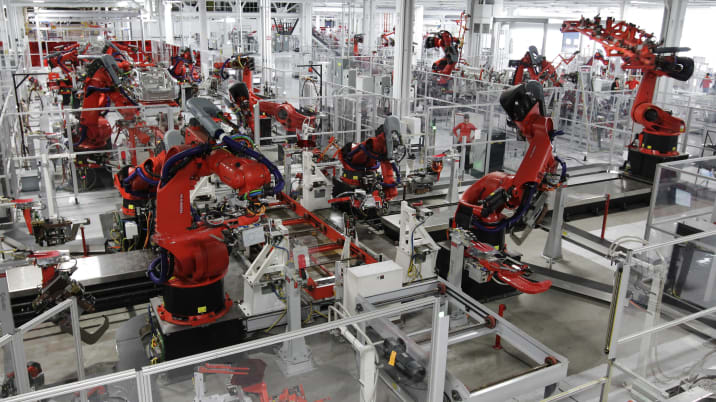 The third instance is production numbers, which didn't make an appearance in the Q3 report of 2014. Tesla used to say how many cars it had built in the quarter, but in its last report it said instead that production was affected by a two-week shutdown to retool its factory in Fremont, California, and it wouldn't predict production for the coming quarter, either - something else it formerly did.

The production issue is a key one because Elon Musk repeatedly says that at the moment deliveries are constrained by production, not by demand. Tesla's blog entry on the refit said it would increase capacity by fifty percent this year, after producing about 33,000 cars last year, but we've never really been clear on what that capacity at Fremont is. As of November 2014, the plant was making 1,000 cars a week. However, in a 2013 Motor Trend article, plant manager Gilbert Passin told MT technical editor Frank Markus that he " believes the plant could build 100,000 vehicles per year without greatly stretching the current equipment." This was a year before the refit; admittedly, production can be bottlenecked by any supply shortfall on the line, but it's hard to believe the plant manager would be that far off on capacity, and 100,000 before the refit is a long way from the roughly 33,000 units of 2014.

Musk has said that regarding the omission of monthly deliveries that he doesn't want people speculating based on the fluctuating numbers. He's also made the claim that, "Orders is not a true measure of demand. It is just a measure of that's the amount of stuff we need to do to meet our production and delivery number." His point is that since Tesla can't make all the cars it needs to make right now, it would be pointless to unlock even more demand.

Analysts, though, wonder why other numbers are now disappearing, replaced by generalities. Tesla has been fiddling with the way it reports almost since it started reporting, sometimes to deleterious effect: in 2013 it got pulled up by the SEC over promoting non-GAAP figures, which showed positive net income, instead of GAAP numbers that showed a loss.

Tesla will release its 2014 results on February 11 and hold a conference call for analysts the day after. Then we'll know if production numbers, or any of those others, have been restored or other numbers removed. But we think it would be useless to wield this a hammer to bang on the EV maker - Tesla is nowhere near the first company to do this, and we should well know by now that one report will not stop the quirky juggernaut.