UPDATE: Daimler AG became aware that, in a small number of individual cases, it is possible for temporary spots and/or shiny patches to form on the man-made leather surfaces of the 2015 C-Class in sub-freezing temperatures. No accidents or injuries have been reported, and we have no reason to believe that there are any hazards to customers. Replacement parts are expected to start shipping to dealers by next week. 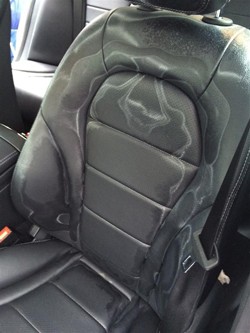 Owners of the 2015 Mercedes-Benz C-Class are learning the hard way that you don't necessarily want to buy a new vehicle in its first model year. Besides reports of poorly fitting taillights and faulty infotainment touchpads, a number of reports are popping up on the forums of MBWorld.org claiming that the compact luxury sedan's seats are, for lack of a better term, bleeding. Owners of US-built, 2015 C-Classes fitted with MB Tex vinyl interiors are reporting a white, oily, shiny residue discoloring their seats that shows up, often after cold cars are quickly heated.

It's important to note that this residue is not necessarily staining the seats permanently – warm, soapy water is often all that's needed to restore the original finish. In other cases, the residue disappears of its own accord, only to reappear in an entirely different pattern. That doesn't make things any more acceptable to owners, many of whom have reached out to Mercedes with complaints.

It's not clear how many vehicles are affected, but there are a sizable number of forum threads on the issue on MBWorld alone, and the problem is prevalent enough that Mercedes has issued a technical service bulletin to its dealers. According to the forum postings, the TSB instructs service technicians to replace the headrest and seat cover (except for the front, passenger-side seat bottom because of "factory calibration issues") in affected customer vehicles. New C-Class models in dealer inventories, meanwhile, are to get the soapy water treatment if they're showing signs of the residue. Neither one of those moves seems to represent a long-term fix, though.

Black MB Tex seats – both the standard and sport variety – seem to be particularly susceptible to the residue, although we stumbled across at least one image of what looks like Silk Beige MB Tex with speckles of residue.

As for what the substance is, one forum poster claims it's a "plasticizer that is used to soften the vinyl," while another has allegedly been told by Mercedes that the issue poses "no health risks." At least one MBWorld member who goes by the handle gnus isn't comforted by that reassurance, saying "I had to bring my car to the dealer and get a loaner. I can't risk having my under one-year-old child in this based on the assumption it's safe."

Autoblog has reached out to both Mercedes-Benz USA and its parent company, Daimler, for information on the issue, including what long-term steps are going to be taken for existing customer cars as well as new-build vehicles. Our source tell us the company is aware of and is investigating the problems, and that it expects to address all customer complaints within the first quarter of this year. In an official statement, available above, Mercedes confirmed that the residue is not harmful and has not caused any accidents, while replacement parts should start shipping to dealers next week.