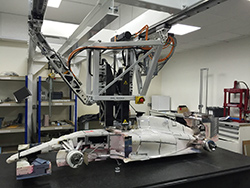 The holiday shopping season is in full swing, and maybe you have someone on your list who already seems to have everything. Never fear, an upcoming auction from the now-defunct Marussia Formula 1 Team might be just the ticket for your hard-to-shop-for racing fan.

During its brief tenure in F1, Marussia only managed to score two championship points, both of which came during this season's grand prix in Monaco. In October, the team announced that it would miss the US Grand Prix and declared bankruptcy soon afterward. Now, the squad's wares are crossing the auction block on December 16 and 17 in England, and the goods are streaming online.

The highlight for many people will likely be the sale of complete Formula 1 cars, albeit without their engines. But the buyer will obviously need spares, and the auction will feature plenty of those, too. Images show tables stacked with body panels, and the floor is covered with exhausts and other components.

Some of the other cool items include the opportunity to pick up one of the team's race suits. Sure, arriving to a local track day in it next year might look a little silly, but imagine being able to show the overalls off in 20 years when Marussia starts to seem cool and vintage among F1 fans. There's also enough tools and machines available to build just about anything mechanical you could ever want, too.

In addition to the smaller items, Marussia is auctioning off its transport and technical trucks. Getting them to the US is probably too much work, but a race team in Europe could probably find a great use for them in the paddock in seasons to come.

Check out the gallery for a look at some of these items or head over to auctioneers CA Global Partners to see the complete listing with all of the images. If these lots aren't enough, the company has another Marussia sale closing on January 21 with three GP3 cars and a Super Aguri racer.