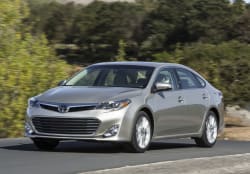 Toyota has announced a rather small voluntary recall, affecting 5,650 Avalon and Camry sedans from model year 2014. Both gas and hybrid models are included in the action.

This recall focuses on the left front lower suspension arm, which may have a bad bolt connecting it to the ball joint. If the car hits a big enough pothole – a real concern as we head into winter – or suffers a major impact, the two components could separate, at which point steering control would more or less vanish.

According to Toyota, there have been no crashes, injuries or deaths due to this problem. Toyota is notifying owners, who will need to report to dealers for a free replacement lower suspension arm.

In the involved vehicles, the left front suspension lower arm may have an improperly manufactured bolt hole where it connects to the ball joint. This could affect bolt clamping force. If this condition exists, in the event of a severe impact to the lower ball joint, which could result from varying road surfaces during normal driving, the lower arm could separate from the ball joint. Separation of the lower arm can cause a loss of steering control.

Toyota is not aware of any crashes, injuries, or fatalities related to this condition.

Owners of the involved vehicles will receive a notification by first class mail. Toyota dealers will replace the left front lower suspension arm with a new one.