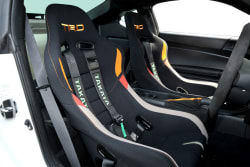 Toyota is finally making good on its Griffon concept from last year with this limited-edition 14R-60 that basically hops through the Toyota Racing Development catalog to imagine the ultimate lightweight GT86 (the continental relative to the Scion FR-S/ Subaru BR-Z). Unfortunately, it's not coming stateside, and even if this modded Toyobaru were coming here, you might not want to pay the rather steep price.

Like the concept, the 2.0-liter boxer engine still makes the same 197 horsepower and 151 pound-feet of torque. However, the drivetrain isn't entirely untouched thanks to a new air filter, engine oil cooler, a reinforced clutch, lightweight flywheel, and mechanical limited-slip differential from TRD. The six-speed transmission is also tweaked, with different gearing in first and second and an altered final drive ratio.

To keep things planted the suspension gets a new coilovers, a V-shaped tower brace in the front and another in the rear. Improved deceleration comes thanks to upgraded brakes. There also are even more goodies on the outside, including a complete body kit that includes a carbon-fiber roof and massive rear spoiler. The stock wheels are replaced with 18-inch forged magnesium units, as well.

Inside, buyers get a pair of TRD-branded race seats with four-point harnesses and some Alcantara trim. But don't expect to drive with many friends, because the rear seats are completely gone.

It's also unclear what all of these tweaks do to the GT86's weight, because on its webpage for the model Toyota still lists it at the stock 2,712 pounds (1,230 kilograms). You can check out the JDM site for the 14R-60 here, though it's all in Japanese, or click through the gallery of some of the parts the 14R-60 comes with.