Nissan Altima and Sentra to get Murano-inspired design redo 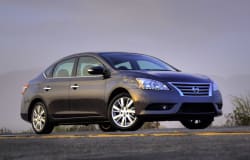 The Nissan Altima and Sentra sedans are both very competent, economical, comfortable and well-equipped ways of getting from A to B. They're also both decidedly boring to look at, which is not a good trait in their increasingly style-driven segments.

To rectify this, Nissan is planning design overhauls for its mainstream, with the Sentra adopting the sportier, Euro-style looks of the Pulsar, according to The Car Connection. While that (sadly) won't mean the five-door Pulsar will come to the US market, fitting the European stylings to the Sentra should go a long way towards broadening the car's appeal.

That parcel of information comes from Nissan design boss Shiro Nakamura, who spoke to The Car Connection at last week's Paris Motor Show.

Like the Sentra, the Altima's styling upgrades will be handled, at first, with an upcoming mid-cycle refresh being targeted for 2016 or 2017. The larger sedan won't, however, draw its design inspiration from Europe. Instead, the Altima will look to the more aggressive stylings of the new Murano crossover (an Autoblog favorite) and the Sports Sedan Concept-inspired 2016 Maxima.

The sportier updates will be even more sweeping, Nakamura explained, when the next-generation Altima and Sentra arrive.

" We are pulling these cars closer to a new generation with minor change. So with the minor change we will have a front end very strong, consistent with the new lineup – Murano, Maxima, Sentra, Altima – all very coherent," Nakamura told TCC. "And the next generation, they're also becoming more sporty, but still very affordable and practical – not just sporty."