From Tasmania to Translogic, Jonathon Buckley takes the wheel

Autoblog Staff
Translogic is moving to Autoblog with a new host, Jonathon Buckley. The award-winning video series has covered breakthroughs in transportation technology since it launched on AOL Autos in 2011. Jonathon will now continue that tradition at Autoblog.

In the weeks ahead, Translogic will deliver episodes featuring an Italian supercar, a three-wheeled hypermiler, and a plug-in hybrid sportscar. Catch Jonathon's debut episode of Translogic, premiering today on Autoblog at 12:45PM ET, featuring the all-electric Mission RS superbike, and stay tuned for new installments of the series every-other Monday, right here on Autoblog. 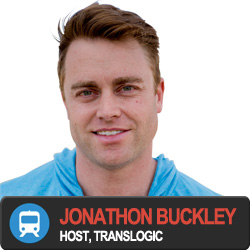 Hometown: "A quaint little town named Burnie on the coast of Tasmania in Australia."

Favorite vehicle: "Hmm, the answer to this changes frequently, so I'll do my best, but will have to break it down into categories."

Car: LaFerrari
Truck: Toyota Tacoma
Motorcycle: Ducati 1199 Superleggera
Plane: F-18 Super Hornet
Helicopter: Airwolf ("If you grew up in the 80's you should know this one.")
Bus: Superbus
Train: Puffing Billy
Heavy Machinery: The Walking Harvester (" Google it. It's terrifying.")

Dream Translogic episode: "Heading to the Nürburgring to see how close I can get to the current world record lap time in the Porsche 918 Spyder."

Favorite app: " SignNow has essentially eliminated my need for a scanner and a fax machine. Stupid Zombies is pretty rad too."

Most exciting thing about hosting Translogic: "Well, as the host I'll be exploring new concepts and innovations that have the potential to improve our lives and lead us into a technologically advanced, sustainable and exciting future. In a nutshell, I get to play with a bunch of new stuff!"

Anything Else: "Can somebody please figure out how to polarize gravity?! We're well overdue for hover boards, flying cars and anti-gravity Boots."