Domenick Yoney
This weekend, the sun will shed light on a long-promised electric superbike at the Quail Motorcycle Gathering in Carmel, CA. In advance of this auspicious occasion, Lightning Motorcycles has sent out a teaser photo of the machine in question, which gives us a shadowy idea of what to expect. Being the kind of kids that would search our parent's room ahead of Christmas, we decided to peer into the darkness with a little photo-manipulation magic and were rewarded with a sneak peek, which we will share with you below.

The LS-218 – named in honor of the land-speed version hitting 218 miles per hour – appears to be pretty close to a revised version of the original concept sketch by Glynn Kerr, though the designer intimates on his Facebook page that there may yet be further changes. Aside from the esthetics, the electro-mechanicals are said to be the same as those in the bike that Carlin Dunne set a new record with at last years' Pikes Peak International Hill Climb, beating its closest gas-powered competitor by 20 seconds.

To review, that involves a liquid-cooled, high-rpm electric motor spinning out over 200 horsepower with 168 foot-pounds of torque, whilst being powered by a battery pack stuffed with either 12, 15, or 20 kWhs worth of lithium cells from Enerdel. Apparently, the price tag will sport the same $38,888 starting price tag as had been mentioned when the consumer version was originally announced. It will also come equipped with goodies like an Öhlins FGRT inverted fork, Brembo brakes and Marchesini forged magnesium wheels. You can see the most recent concept sketch here. Scroll down for a look at our enhanced teaser photo along with the official press release. 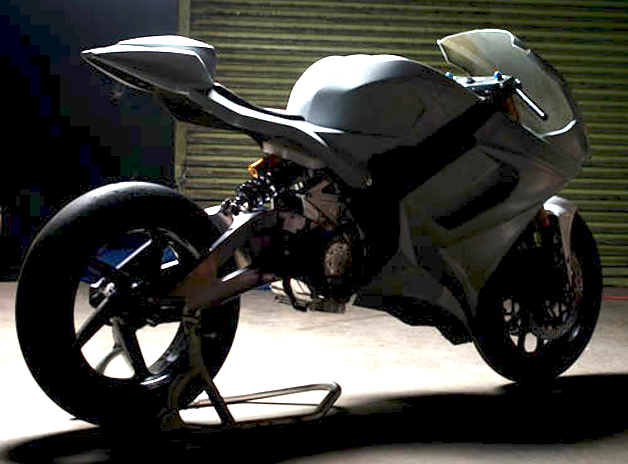 Show full PR text
Lightning is excited to introduce the most technologically advanced and highest performing street-legal production motorcycle in the world - the Lightning Superbike LS-218!

"Since 2006 the Lightning team has been dedicated to developing electric motorcycles that meet and exceed the performance of the best ICE (Induction Combustion Engine) alternatives", said Richard Hatfield, CEO of Lightning Motorcycle." To have broad acceptance from the motorcyclist community,we need to provide design, performance and value that competes head to head with the best gasoline motorcycles on the market. Lightning's R&D team has developed electric vehicle technology through years of competition at racing events around the world. We believe that the LS-218 offers consumers the best of design, performance and value in today's market."

The Lightning LS-218 presents the first opportunity that consumers can purchase a production motorcycle capable of setting land speed records and winning road racing competitions that is as easy to ride as a 250cc commuter bike. Lightning's LS-218 IPM liquid cooled 10,500 rpm electric motor can produce in excess of 200 hp and 168 ft/lbs of torque. Lightning's proprietary Ultra High Power Density Drive system allows max power setting without any concerns of overheating. At highway speed, LS-218 can exceed 100 miles range per charge with the standard battery package. You can use standard power outlets to charge LS-218. At public fast charging stations, it will take less than 30 mins to charge.

The Lightning LS-218 is a direct street legal version of the same bike that won AMA and FIM races and set landspeed records. Customers can purchase a Lightning LS- 218 and have the same opportunity to win an FIM EPower race or set a land speed record themselves while still using their LS-218 as daily commuter bike.

"Consumers no longer are required to pay more for less performance to support green technology", said Richard Hatfield , "The Lightning LS-218′s can compete with the best ICE alternatives today. Lightning achieved the goal we set in 2009 to compete against and win against the best gasoline race bikes. In June 2013, at Pikes Peak, Lighting won first overall competing against 93 other motorcycle teams (electric and gasoline) by over 20 seconds.

The Lightning LS-218 has more horsepower, more torque, more speed and more performance than any other production motorcycle on the market.

Lightning is taking reservation right now. Reserve your own Lightning LS-218 today and be the first owner of LS-218 with VIN 0001!