Nissan's current Versa Sedan debuted at the 2011 New York Auto Show, so it's only fitting that the humble four-door's midcycle facelift will debut under the kliegs in the Gotham, too. While the automaker's next-generation Murano crossover will take center stage on its display stand, Autoblog has learned that an updated version of the second-generation Nissan subcompact will also open its doors at the Javits Center later this month.

Our sources indicate it will feature revised front-end styling that will bring it more in line with the company's Altima family sedan. The Versa Sedan's interior – cavernous for its class – will get higher-quality fittings, including a revised center stack, steering wheel, gauges and some new plastics. Some of these items have already been seen on another Versa, we've been told – the Versa Note SR hatchback (seen below), which debuted at the Chicago Auto Show in February.

We're not expecting much in the way of mechanical changes, which means we're likely to see the return of the 1.6-liter four-cylinder (rated at 109 horsepower and 107 pound-feet of torque in 2014 spec). That sole powerplant is presently offered with the buyer's choice of a five-speed manual, four-speed automatic or Xtronic continuously variable transmission.

The Versa Sedan has carried a lot of water for the Nissan brand to this point, becoming America's best-selling subcompact as well as its least expensive, starting at $11,990 (*plus $790 destination). But despite the addition of the five-door Versa Note hatchback for the 2014 model year, sales have been slipping – Nissan sold 34,603 Versa models through March, a decrease of 11.9 percent versus this time last year. An updated look and new trimmings could be just the thing to boost sales anew. 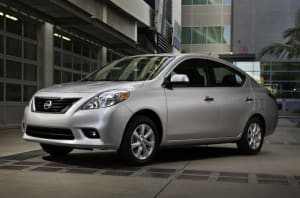