With less than a week to go until the 2015 Lexus RC F makes its debut at the Detroit Auto Show, Lexus has given us a sneak peek at its upcoming performance coupe. Earlier this week, Autoblog was granted were the opportunity for an intimate studio photo shoot with the RC F outside of the bright lights and big crowds sure to surround the coupe at Cobo Hall next week.

Compared to the hybrid version of the all-new RC we saw at the Tokyo Motor Show last year, the RC F has noticeably more aggressive styling. The cartoonishly oversized Lexus spindle grille gets a mesh insert pattern and is flanked by massive intakes in the lower fascia. To make room for what is expected to be a bigger V8 engine, the hood sits higher and is vented, but like many details about the RC F, Lexus is keeping the engine's size and output under wraps (although we have a sneaking suspicion it'll have 460 horsepower). 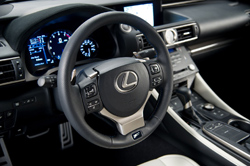 A trio of 19-inch wheel options will be available (including a set that is hand-polished), and the side sills and rear fascia have been modified for F duty. The biggest styling change on the RC F, however, is the LFA-inspired active rear wing that rises at speeds above 50 miles per hour for improved traction and stability. Carrying over cues from the current IS F, the RC F features air outlets behind the front wheel openings and angle-stacked exhaust outlets at the rear of the car.

For the most part, the interior is very similar to what is currently found in the 2014 IS, but there are few notable distinctions. Those includes performance bucket front seats, a thicker steering wheel, and a reconfigurable gauge cluster (similar to what's found in the IS F Sport) along with the addition of a smaller analog speedometer. One interesting difference is the center console, where the drive mode selector has been moved closer to the passenger seat and a touchpad has been situated where we would expect to find Lexus' mouse-like Remote Touch controller. Could Lexus be telegraphing that it will soon be abandoning this controversial infotainment control scheme?

Scroll down for a press release breaking down the design and styling of the 2015 RC F, and sit tight – next Tuesday we'll have more in-depth information about the RC in both its base RC 350 and performance RC F guises.
Show full PR text
Lexus RC F Redefines the Daily Commute with Asphalt-Grinding Performance and Bold Head-Turning Design

TORRANCE, Calif. – Jan. 8, 2014 – Giving new meaning to "back to the grind," the daily
commute is now transformed in to a day at the track with the all-new Lexus RC F. The RC F coupe
is styled with fins, ducts and scoops to support the most power V8 performance car ever
developed by Lexus.

Based on the spectacular all-new RC coupe that was revealed at the Tokyo Motor Show
last November, the RC F has wider wheels and tires, an active rear wing, air scoops, cooling ducts
and carbon fiber components, each delivering uncompromising grit to the driving experience.

Design Exterior
The signature Lexus spindle grille, featuring a single F-pattern, dominates the front of the
RC F from the bottom of the hood to the lower lip. The hood is higher than that of the RC to
accommodate the larger V8 engine and create the powerful flared profile suited to an F model.
Ducts beneath the front bumper, fenders, and strategically-placed aerodynamic stabilizing fins
create a stance which further identifies the F model.

Air outlets at the rear of the front fender form the shape of an L when they merge with side
sill extensions, while stacked trapezoidal quad-outlet tailpipes at the rear add further aggression.
Taking design cues from the Lexus LFA supercar, the RC F features a speed-sensitive active rear
spoiler. It enhances the coupe's lines at standstill and deploys from the RC F's deck at approximately 50 mph and retracts when the speed is less than 25 mph. The wing helps the RC F
maintain traction and stability at higher speeds.

Three variations of 10-spoke 19-inch forged aluminum wheels are available, including two
machine polished designs and one design hand polished by a craftsman.

Design Interior
The striking cockpit-like interior of Lexus RC F complements the aggressive exterior.
Unique components include the meters, steering wheel, seats, ornamentation and pedals. The
instrument panel is dominated by a central meter which changes according to the four selectable
driving modes. The information, color of the display and size of text can be changed.

Occupant comfort is all important. RC F debuts a Lexus-first elliptical cross-section thickgrip
steering wheel with optimum placement of paddle gear shifts. All-new high back seats with an
embossed F on the headrests offer the driver and passenger an exceptional performance fit. The
seats are available in a selection of five leather trims, each with contrasting stitching.
Outstanding new L-shaped rubber slits in the brake and accelerator pedals combine form
and function.

The all-new RC F will be revealed at a press conference at the 2014 North American
International Motor Show in W-152, formerly known as the Riverview Ballroom, at Cobo Center
Jan. 14 at 8:45 am EST. The Lexus press conference will also be streamed live online at
www.lexus-int.com/. Follow the hashtag #AsphaltUp for more developments.