Most of the cars created exclusively for the Gran Turismo video game franchise never make the jump from cyberspace to the real world. The X1 and new X2014 designed by Red Bull's Adrian Newey could scarcely be piloted in real life, and while PSA talked about making a limited run of the otherworldly GTbyCitroën, that never came to be. But the Mercedes AMG Vision Gran Turismo could get such a chance – just not from Mercedes-Benz itself.

J&S World Wide Holdings, an independent Florida outfit led by one Jeff Halverson, was so taken with the static show car displayed at the LA Auto Show that it's committed to building five customer examples. The team plans to use the SLS AMG GT as its base, rebodying it in carbon fiber to resemble the machine in the game.

The 6.3-liter V8 will apparently remain unchanged, with its 583 horsepower driving the rear wheels through a seven-speed dual-clutch transmission, but with 200 pounds shed off the curb weight thanks to the carbon bodywork, could prove to be even faster. The bodywork will get a custom chrome finish, with a retractable rear spoiler, model-specific exhaust and ADV.1 forged alloys. The interior will be customizable to the buyer's tastes, too.

One is earmarked for the US, two for the Middle East and two for Europe. But given the $1.5 million asking price, we have a feeling its creators will be glad to sell them wherever the orders come from. 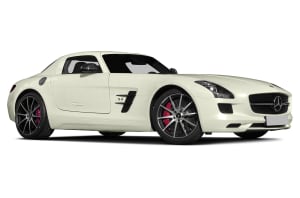