Suzuki brings slew of car and bike concepts to Tokyo As an automaker, Suzuki may be long gone from American shores, but it's still a force to be reckoned with in its home country of Japan. At this week's Tokyo Motor Show, the brand known as much for its two-wheeled fare as its four displayed a slew concept vehicles for both drivers and riders.

The first is the Crosshiker concept (above), which Suzuki says is a followup to the Regina concept that debuted two years ago at the Tokyo show. Based on the same platform but elevated to the stance of a crossover, the Crosshiker is motivated by a 1.0-liter, three-cylinder engine, keeping it eco-chic while appealing to adventurous types with its fun styling. 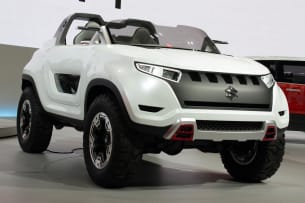 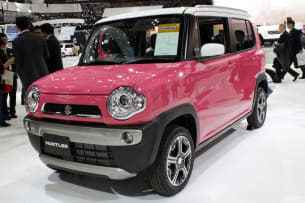 Next up is the X-Lander Concept (above, left) that Suzuki says was made for use in the city and "sometimes go out to play in the field." Based on the Japanese-market production Jimny, the X-Lander features four-wheel drive and a hybrid powertrain with a 1.3-liter engine.

The Hustler concept (above, right) is Suzuki's attempt to create a new vehicle market with a boxy minicar that features SUV styling cues. There's no word on what powers the concept, but Suzuki did show two versions: a four-door and four-door coupe of sorts, the latter featuring a slightly sloping roofline and forward-leaning rear window. 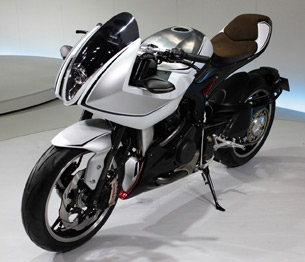 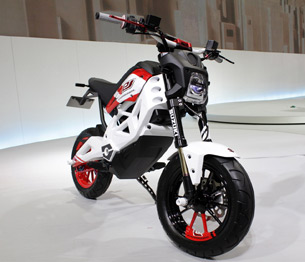 Moving into the world of two-wheeled transportation, we've got the Recursion concept (above, left), which marries the power of larger performance bikes with the handling and maneuverability of smaller bikes by using a lightweight, turbocharged, two-cylinder engine. The Extrigger concept bike (above, right) is altogether different, combining the electric powertrain of the company's e-Let scooter with a smallish supermoto-type frame, effectively tapping into the monkey bike revival started by Honda with the Grom.

Debuting this many concepts at one auto show illustrates that Suzuki isn't the company that many in the US may remember it as. Particularly in its own domestic market of Japan, this company remains competitive and these vehicles suggest its preparing for a bright future.
Show full PR text
Suzuki Announces Exhibits for the 43rd Tokyo Motor Show 2013

Suzuki Motor Corporation will display the following exhibits at the 43rd Tokyo Motor Show 2013 (organizer: Japan Automobile Manufacturers Association), which will be open to the public at the Tokyo Big Sight from November 23 to December 1, 2013.

The Suzuki booth's theme of the Tokyo Motor Show exhibits is: "Let's Create a Brand New Story". Suzuki recognizes that the daily life of each and every customer is a story, and by adding something to each of those stories, our desire to create different, brand new stories together with our customers, is put into the theme.

Based on the Suzuki slogan of "Small Cars for a Big Future," the concept cars to be exhibited at the show offer cars that are currently in demand, cars that should be available in the near future, and cars for the more distant future. In order to build a Brand New Story that will add excitement and passion to the daily lives of customers around the world, the cars are packed with Suzuki's attractive products and unique leading-edge technology.

In addition, the design of the Suzuki booth features an S-shaped border that depicts lightness and softness to an open construction that expresses a bright future. An ultrawide panoramic screen measuring 3.6m x 40m is set at the back of the stage. Introduction videos of the concept cars will be streamed across the main stage to show the Brand New Story of Suzuki and its customers in a beautiful image, which were produced by movie director Shunji Iwai.

CROSSHIKER
The Crosshiker is a compact crossover, which is an alternative offer of the REGINA*, the concept car packed with lightweight and fuel-efficient technologies that was exhibited at the 2011 Tokyo Motor Show. It uses the next-generation lightweight platform adopted for the REGINA*.

It features a size of a compact car while weighing 810kg, the weight of a minicar. With a newly developed 1L 3-cylinder engine, it strikes a balance between power performance and environmental performance.

The Crosshiker inherited the REGINA* concept "Eco-friendly on the inside while having a design with personality that would evoke passion in users," while adopting more exciting styling and a design befitting a crossover tailored to adults who are keeping a playful mind. * The REGINA was exhibited as G70 in overseas.

We want the drivers to use this car in the city and sometimes go out to play in the field. This concept model is packed with such intention.

Based on the Jimny, Suzuki's world-class compact 4WD vehicle, the X-LANDER is equipped with a 1.3L engine and a newly developed automatically controlled manual transmission.

It incorporates a compact lightweight hybrid system equipped with a highly-efficient motor built onto a 4WD system, achieving both up-to-date environmental performance and excellent
running performance.

The vehicle design is loaded with full of playful touches so that the vehicle looks like a fusion of off-road power and mechanical precision.

HUSTLER
A real 4WD hybrid with a distinctive personality.

This is a crossover type concept model of a new-genre minicar that suits the active lifestyle of people who love the nature, love the outdoors, and love sports.

This is a stylish yet practical design with plenty of SUV touches, combining an exterior that looks like it belongs in the outdoors with a roomy, comfortable, and useful interior.

The challenge to a new genre, a crossover that suits an active lifestyle.

This is a concept model that adds further design variation of a coupe silhouette to the reference exhibit HUSTLER.

HUSTLER Coupe
The challenge to a new genre of minicar, a crossover coupe that has a beautiful silhouette.

RECURSION
A compact roadster with sophisticated features of adults packed into a middle-class motorcycle.

By arranging a newly developed 588cm³ water-cooled in-line 2-cylinder engine with an intercooler turbo on its compact body, it realizes easy handling and economy on city streets, and an exhilarating, torquey ride on winding roads.

True to the name, Recursion is a model that brings back the basics of riding excitement in the diverse ways a motorcycle can be enjoyed.

EXTRIGGER
An electric mini motorcycle that offers new sensation to have fun.

This is an electric motorcycle that was developed to give more people the chance to find out the fun of motorcycle. It is easy to ride and offers new sensation to have fun.

An electric motor unit of the e-Let's electric scooter is equipped on a compact frame similar to that of a small bicycle.

While it feels like a toy bike, the EXTRIGGER has features that are small but look like the real thing: aluminum frame, inverted front forks, front and rear disc brakes, and so on.

Making use of visible light communication technology, the rider can receive information from the motorcycle shop or enjoy communicating with friends.

The name EXTRIGGER is coined from EX, which stands for Electric CROSS (X) over, and TRIGGER, which means a chance. Our desire to give people a chance to get interested in motorcycles with this model is put into its name.

This model is a variation of the GSR250*2, a highly popular model that first went on sale in 2012.

The handlebars were raised and moved closer to the rider, creating a less bent-forward riding posture and improved riding comfort, especially when touring.

*1 Exhibited as GW250S at the Shanghai International Automobile Industry Exhibition in
April 2013.
*2 GW250/INAZUMA in overseas market.