Daihatsu explores the future of play with two Kopen concepts 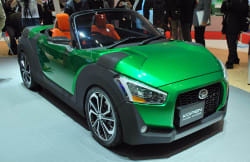 Daihatsu came to this year's Tokyo Motor Show with a clear (and very Japanese) statement of purpose for its show cars: "PLAY Tomorrow! Exploring the further possibilities of mini vehicles." Based on what we've seen so far, the playful aspect of the concept cars on the Daihatsu show stand is front and center.

Perhaps most playful of all are a pair of Kopen concepts that would seem to foreshadow an upcoming replacement for the Daihatsu Copen kei car. The Kopen is a very stylish looking little convertible, angular in a way that arguably makes its small form even cuter than before. The big party trick for both the new concepts is that they have swappable body panels for the last word in personalization, sort of like the original Smart car concept. You can see the panels being removed in the gallery above.

The first version of the concept, Kopen Rmz, is seen above in blue. Rmz would be aimed at car buyers that are looking for a more refined and stylish mini-convertible, and the concept boasts a high-quality interior "using only the best materials."

The second take on Daihatsu's espoused "New Fun+ open-top sports car with new feel" formula, is the green Kopen Xmz (meant to be pronounced "cross-m-z"). This slightly butched-up Kopen has sections of black body cladding to add a bit of aggression, as well as stripped-down interior.

Scroll down to find Daihatsu's brief press release, and be sure to take some time with both of our Kopen Concept galleries.
Show full PR text
Daihatsu to exhibit the Kopen, Deca Deca and more at the Tokyo Motor Show

Daihatsu Motor Co., Ltd. (Daihatsu) will be exhibiting at the 43rd Tokyo Motor Show, which will be open to the public at Tokyo Big Sight from Friday, November 22 to Sunday, December 1. As well as premiering four new show cars (three models) for the first time anywhere in the world, Daihatsu will also be exhibiting one car scheduled for release (one model), seven production cars and various other technologies.

Based on the overall theme of this year's Tokyo Motor Show – "Compete! And shape a new future." – Daihatsu will be playing to its strengths by showcasing the fun and the wide range of possibilities that mini vehicles offer, under the banner, "PLAY Tomorrow! Exploring the further possibilities of mini vehicles." It will be exhibiting cars and technologies that capture the near future, paving the way for a better life and a brighter tomorrow for people all over the world.

As well as offering improved performance as an open-top sports car, the Kopen in particular is a car that offers new value in a different form. The outer body panels made from resin can be exchanged like a cover, and drivers can enjoy different designs based on a single framework. Daihatsu will be showcasing two of these designs at the motor show, one with a "Stylish & Emotional" exterior and the other with "Tough & Aggressive" styling.

The Deca Deca, meanwhile, proposes a new category of vehicles called "super space". Combining a commanding view from the front seats on a par with a van with a large interior utility space, it was developed for energetic young people and families who enjoy outdoor pursuits during the weekend, and also for active seniors.

The FC Deco Deck on the other hand has been developed as a zero-emission next generation mobility vehicle. Equipped with a unique precious metal-free liquid fuel cell system developed by Daihatsu, it falls within standards for mini vehicles. Daihatsu will also be exhibiting two types of generators based on the same fuel cell system: FC-Dock 20C and the FC-Dock 5C. These are technologies that will open up new possibilities for the energy society of the future, offering security and freedom.

Daihatsu will also be showcasing the Tanto Welcome Seat, a welfare vehicle scheduled for release based on the new Tanto, which was launched in October this year.

Based on the concept of a "New Fun+ open-top sports car with a new feel", the Kopen is a lightweight open-top sports car with an entirely new form. Featuring body panel designs that can be removed and replaced like a cover, it offers drivers a new way of enjoying their car. It also offers an improved drive thanks to its framework and structure. The result is the ultimate new experience; a car that is both a pleasure to drive and own.

Rmz and Xmz: Two proposals
* Rmz design features
- Unique "Stylish & Emotional" styling
- High quality interior using only the best materials
* Xmz design features
- "Tough & Aggressive" styling with a real presence, thanks to a combination of different
materials and textures on the bodywork
- Simple interior with a stripped back feel