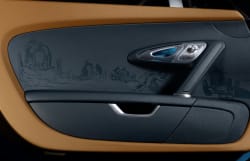 Bugatti is in the midst of a six-part special series of Veyrons that pay tribute to legendary figures from its history. The first, unveiled at Pebble Beach, paid tribute to Jean-Pierre Wimille. The second arrived in Frankfurt to recall Jean Bugatti. Given the patent application we came across, we expected the next would honor Ettore's brother Rembrandt Bugatti, who designed the prancing elephant hood ornament. But that one will apparently have to wait, because Molsheim has just revealed the third edition in its Les Légendes de Bugatti series in tribute to one Meo Costantini.

A close personal friend of Ettore himself, Meo Costantini raced Bugattis in the 1920s and went on to manage the factory racing team. He won the Targa Florio twice in a Bugatti Type 35, a model that went down in history as one of the most successful racing cars ever made, and won several grands prix.

Like the other Legend specials, the Costantini edition is based on the Vitesse roadster with its 1,200-horsepower, 8.0-liter, quad-turbo W16 engine; 2.6-second 0-62 time; and 253-mile-per-hour top speed. What sets this one apart is its trim. The carbon-fiber parts of the bodywork are painted in signature French Racing Blue, and the aluminum is left exposed, polished and clear-coated. The map of the Targa Florio route is painted on the underside of the rear wing and imprinted in between the seats, and Costantini's signature is etched into the fuel cap and embroidered into the headrests.

Inside it's all cognac and dark blue leather with light blue stitching, but the party trick is the racing scenes laser-etched into the leather. Unveiled at the Dubai International Motor Show this week (where the Toyota GT86 sedan most definitely is not), the Costantini edition is up for sale at €2.09 million (>$2.8m), and that's before taxes and destination.
Show full PR text
Dubai International Motor Show 2013: World premiere of the Bugatti Legend "Meo Costantini"

- The third model in the six-part edition "Les Légendes de Bugatti" is dedicated to Meo Costantini, a close friend of company founder Ettore Bugatti and two-time winner of the Targa Florio
- Elaborate laser engravings in the interior illustrate the world of motorsports in the 1920s
- Legend Edition is reminiscent of the Bugatti Type 35, one of the most successful racing cars of all time

Molsheim / Dubai, 5 November 2013. Bugatti is presenting the third model in its six-part edition "Les Légendes de Bugatti" at this year's Dubai International Motor Show (November 5–9). This Legend car, which like all cars in the series is based on the Veyron 16.4 Grand Sport Vitesse, pays homage to Meo Costantini. Costantini was a close friend of the company's founder, Ettore Bugatti. He was the head of Bugatti's factory race team for many years and was also a driver, winning the Targa Florio two times in the Bugatti Type 35, one of the most successful racing cars of all time. The Legend Edition "Meo Costantini" is priced at €2.09 million, excluding taxes and transport. As with all Bugatti Legend cars, the production run is limited to only three vehicles.

"Meo Costantini embodies the most successful era in Bugatti's racing history," says Dr Wolfgang Schreiber, President of Bugatti Automobiles S.A.S. "Ettore Bugatti's vehicles from the 1920s stand for light-weight construction and technical aesthetics. When Bugatti created the Type 35, he inspired one of the most successful racing cars of all time. The Vitesse 'Meo Costantini' is reminiscent of the Type 35."

Bartolomeo "Meo" Costantini, born in 1889, was the head of Bugatti's racing team for eight years. He developed an interest in racing cars and began racing at an early age. It was after the First World War that he first came into contact with the Bugatti brand, when he was involved in modifying a Bugatti Type 13. This is the car that Meo would drive during his first races in 1920-21. It was through these races that Ettore Bugatti first became aware of the young Italian's talents, and he invited him to Molsheim in 1923. The two developed a close bond, and Costantini worked for Bugatti as a racing driver and advisor from that time on. As a member of the factory team in 1925 and 1926, he won the most famous and important race in its time, the Targa Florio in Sicily. In 1926, he also drove to victory at the Spanish Grand Prix and the Grand Prix of Milan, and took second place in Monza. Shortly afterwards he ended his active racing career in order to manage the Bugatti racing team, a post which he held from 1927 until 1935. Costantini stayed at Bugatti until 1937.

Bugatti Legend Car "Meo Costantini"
The series of Bugatti Legend cars, "Les Légendes de Bugatti", was launched in August at California's Pebble Beach Concours d'Elegance with the Vitesse "Jean-Pierre Wimille". This was followed by the Legend car, "Jean Bugatti", which was presented at the International Motor Show in Frankfurt. Now, the third Legend Edition, dedicated to Meo Costantini, will be revealed to the public for the first time in Dubai.

Design
Exterior. The body of the Vitesse Legend "Meo Costantini" is primarily constructed of carbon fiber. The wings, doors, the parts behind the doors, the "medaillons" (French) and corners of the front bumper are rendered in aluminium. The blue paintwork on the carbon fiber parts references France's classic motor sport color, as well as the Type 35. The new paint color "Bugatti Dark Blue Sport" has been specially developed for the vehicle. The aluminium parts are hand-polished and coated with clear lacquer. Bugatti is the only production manufacturer to offer polished clear-coated aluminium bodywork. Another special feature of this car is that individual parts have two different paint finishes. This requires great skill, and is particularly impressive to see on the wings, which are finished in both clear lacquer and blue paint.

As a reference to Costantini's victory at Targa Florio, the silhouette of the historic race course is painted on the underside of the rear wing (air-brake) in "Bugatti Dark Blue Sport." Another feature that pays tribute to the illustrious racing driver is his signature, which is laser-engraved into the aluminium tank and oil caps and painted in silver.

Interior. The interior of the Legend Vitesse "Meo Costantini" is completely upholstered in leather. The roof, footwell, center sections of the seats and rear wall are all in the color "Gaucho", a sophisticated cognac tone. The seat's side cushions, arm rests, extended center console, door panels, dash panel, instrument panel and steering wheel are all trimmed in dark blue leather in the "Lake Blue" color. The decorative stitching in contrasting light blue ("Bugatti Light Blue Sport") lends an expressive touch.

A brief glance into the interior makes it immediately clear to whom the car is dedicated. The head restraints are embroidered with Meo Costantini's signature in "Bugatti Light Blue Sport," whilst the cover of the rear center box features the eye-catching silhouette of the Targa Florio race route. The silhouette is portrayed in a milled and polished aluminium relief that has been attached directly below the EB logo on the cover, itself crafted from dark blue clear-coated carbon fiber.

A special highlight of the interior is the racing scenes and vintage car motifs on the doors, which have been laser-engraved into the leather trim with the utmost precision and attention to detail. These images illustrate the most glorious moments of Meo Costantini's racing career and the exciting world of motor racing in the 1920s. The interior trim of the door pockets and door handle recesses in "Bugatti Light Blue Sport" adds a dash of color.

The Vitesse Legend "Meo Costantini" also shares several features with the other Legend cars in the Edition, including the inlay in the extended section of the center console, crafted of clear-coated carbon fiber and sporting the Legend logo with the famous Bugatti elephant, and the door sill strips displaying the likeness and signature of Meo Costantini.

Bugatti Type 35: One of the most successful racing cars of all time
The Bugatti Type 35 numbers among the brand's most outstanding vehicles. With more than 2,000 victories, this is one of the most successful racing cars in motorsports history. In line with the motto "Race on Sunday, sell on Monday", the Type 35 brought a golden era to the Molsheim-based company, with Ettore Bugatti selling many Type 35s directly to wealthy racing drivers directly after the races. In its time, the Type 35 was the only car that could be driven both on the race track and on public roads.

Meo Costantini achieved almost all of his victories in a Type 35. The racing car draws its power of approximately 100 hp from a 2-liter, straight eight engine. Its weight of 750 kg including the body is distributed perfectly across the axles (50 to 50 percent), giving the car incredible manoeuvrability. With its characteristic racing car body in tear-drop shape, this is a car that continues to capture the imagination right up to the present day.

The Dubai International Motor Show takes place on Nov 5 -9, 2013 at the Dubai World Trade Centre. The Bugatti exhibit is in Sheik Saeed Hall 1.