Land Rover debuts Range Rover Hybrid, not bound for US

Considering what year it is, it almost seems weird to say that Land Rover has just introduced its very first production hybrid here at the 2013 Frankfurt Motor Show. After all, automakers have been getting into the gasoline-electric game for well over a decade now. Nevertheless, Landie's first hybrid vehicle is, of course, the flagship Range Rover, though this technology can also be had in the smaller Range Rover Sport, as well.

Land Rover's hybrid system pairs a 47-horsepower electric motor with a 3.0-liter turbodiesel V6, for a combined system output of 355 hp and 516 pound-feet of torque. That force runs to all four wheels via an eight-speed automatic transmission, and Land Rover says this electrified system is good for 44.1 miles per gallon (combined) on the EU cycle (about 37 mpg US). This whole hybrid setup adds some 265 pounds to the weight of the aluminum-bodied Range Rover, but even so, Land Rover tells us that the big RR can hit 62 miles per hour in 6.9 seconds, while the Sport will do that same sprint in 6.7.

As of this writing, Land Rover only plans to offer the hybrid Range Rover models in overseas markets, though we're hopeful these vehicles will make their way to the US, what with impending CAFE requirements looming. Either way, it's nice to see Land Rover finally getting into the electrified space.
Show full PR text
Land Rover Launches It's First Hybrid Range Rover Models

Available to order in Europe from September 10 with first deliveries in early 2014, the two all-aluminium models are based on Land Rover's Premium Lightweight Architecture and share an identical powertrain. They are the world's first premium diesel SUV hybrids.

This 'Silk Trail 2013' 16,000km expedition visits 12 countries and takes in some of the world's most challenging roads, passes and trails, including part of the ancient, 4,000 mile Silk Road connecting Asia with the Mediterranean. These are the first hybrids to ever attempt this challenging route.

The electric motor produces 170Nm torque to boost acceleration and drives the vehicle in EV Mode. The motor also acts as a generator, harvesting kinetic energy through regenerative braking, charging the battery when the vehicle is slowing. In driver-selectable EV mode the Range Rover Hybrid can travel at speeds of up to 30mph (48km/h) for a range of up to one mile (1.6km) before the diesel engine seamlessly restarts.

Together, output of the diesel engine and electric motor is 340PS at 4,000rpm and a class-leading 700Nm torque between 1,500-3,000rpm, resulting in stunning SDV8-style performance. Both models accelerate to 62mph (100km/h) in under seven seconds, deliver strong transient and mid-range performance with a top speed of 135mph (218km/h), combined with a 26 percent reduction in CO2 emissions to 169g/km, equivalent to 44.1mpg on the combined cycle.

The latest generation Range Rover models have all been designed with the integration of a hybrid system in mind. Consequently, the liquid cooled,battery pack is mounted beneath the floor of the vehicle in a protective boron-steel cradle without impacting on the cabin or luggage space. The Range Rover Hybrid has the same five-seat capacity and luggage space as the standard vehicle and retains the full-size spare wheel. This no-compromise philosophy is echoed in the Range Rover Sport Hybrid whose interior is unchanged from the standard model, right down to the 5+2 seating.

Both hybrid Range Rover models continue to deliver a class-leading breadth of capability and versatility, enhanced by the exceptionally linear torque delivery from the powertrain and retaining Land Rover's peerless four-wheel drive system including Terrain Response® 2, with uncompromised wading and ground clearance. 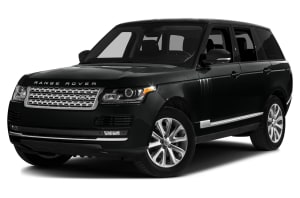