CR: If you buy a Chevy Spark, make sure it's the EV CR was particularly effusive about the car's handling and ride quality as well as pickup from the 130-horsepower motor, calling Chevy's estimate of a sub-8-second 0-60 mile per hour time "more than believable." The navigation and connected radio also received props, as did the car's official 82-mile single-charge range, which beats out that of the Nissan Leaf ( sort of). Check out CR's Spark EV "first drive" impressions here.

Factor in the $10,000 in tax incentives in places like California (the feds provide $7,500 of that total, which is available nationwide), and the Spark EV can be had for a tick under $17,500, making it a better play than the conventional Spark, CR says. Folks can also lease the car for $199 a month.

It's worth noting that we came to a similar conclusion with the Smart ForTwo Electric Drive compared to the gas-powered Smart, saying after our own test last October that the two-seater EV's acceleration and all-around quality made it a better option than the gas-powered ForTwo. 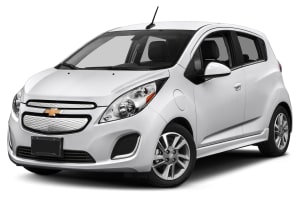