How To Tell An Elderly Relative It's Time To Stop Driving

Author Carol-Ann Hamilton walks us through a very delicate conversation 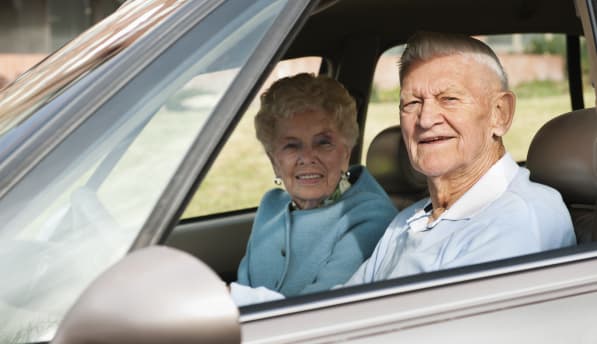 Did something happen in your life that inspired you to write about this topic?

Yes, with my father. He, Bill, was incredibly stubborn and always prided himself on his driving capability. He couldn't wait to get his driver's license when he turned 16 and he ultimately became a truck driver during WWII, delivering to a plant in Ontario. It was his way of contributing to the war effort. He prided himself on his stellar driving record.

But in November 2010, things started to change. After people turn 80 in Canada, they have to take a written test to show that they're competent enough to drive. When he went to have his license renewed, he mysteriously failed the test. I called and asked for him to have the chance to retake the test. They agreed and he passed. But his odd failure the first time was a warning sign for me.

Then, in March 2011, he began to have mysterious parking lot accidents. Bumping into adjoining cars, mistaking pedals, etc. It started to get progressively serious. By the fall of 2011, I knew that I had to start having earnest discussions with him about his ability to drive.

How did the conversation go?

It was tough. This is a very delicate conversation that needs to be handled inch by inch. Start out extremely gently. My father was so tempted to buy another car when his driving ability started to go. The local GM dealership kept sending him fliers and he wanted to go have a look at the new cars. I started by saying to him, "OK, I see that you want a new car, but there have been a couple of instances [in reference to the parking lot and failed tests]. Maybe it's time that we look at the next chapter."

You need to use a very gentle tone here and make sure that you have the conversation in a comfortable place. Try the kitchen, maybe. Fundamentally, you have to work to balance their ego with reality. You should also expect a knee-jerk reaction from them. But the seed will have been planted and you can start chipping away at this issue. The relative will start to think about it. They will start to think, "OK, maybe I don't need a car" and you'll catch them making small decisions like "maybe I should take a taxi to the post office, grocery store, etc."

You should also work with adjuncts behind the scenes. For me, this meant calling the GM dealership and asking them to stop sending my father fliers about the new cars they had. I called the auto insurance underwriters and asked them to do what they can to discourage the renewal of my father's policy on his current car.

Did your father have setbacks during this process?

Oh yes. He had relapses. He would agree to things I was saying and then the next day he would be back to wanting to go to the dealership to get a new car. You think you're making strides and then all of a sudden you're back to zero. This is the most relentless life chapter for people unless they have an infant.

Did you eventually have to lay down the law and take the car away?

No, it never got to that point. But you need to be a warrior woman/man during this process. Had he not surrendered I would've taken the car keys and hidden them. He would have been furious, but at this point you have to be courageous and have a frank conversation that says, "We've been trying to be gentle, but this is literally a matter of life and death. You are not going to drive anymore. I forbid it."

What are the warning signs people with elderly relatives should look for?

You need to always stay alert and watch out for the incidents like I experienced with my father. I never noticed any signs of dementia with him, but I certainly saw decreases in his motor abilities. He was unsteady on his feet. He claimed that he was using the pedals correctly, but there were times when that was clearly not the case. Once, he mistakenly stepped on the accelerator when he meant to brake and he careered into a neighbor's driveway.

It's important to use your intuition and common sense after these incidents, but always remember how important it is to safeguard their esteem during these conversations. It's not unlike dealing with a teenager. Essentially, you're parenting your parents. That's not a very tempting situation to be in, but remember that this is a life and death situation, and you have a responsibility to make sure they're not endangering themselves or anyone else on the road.

Carol-Ann Hamilton is the author of Coping With Un-Cope-Able Parents: Loving Action For Eldercare