Next Mazdaspeed3 could look this good

Steven J. Ewing
Mazda showed off its brand-new 2014 Mazda3 at an event in New York City earlier this week, and we have to say, at first blush, we're pretty impressed. It looks fantastic – like a smaller, hatch'd version of the already sleek Mazda6 sedan that went on sale earlier this year. And with a 200-pound weight reduction, efficient Skyactiv gasoline engines underhood and Mazda's usual focus on driving dynamics above all, we're willing to bet that the new Three will be a pretty decent steer.

Of course, being enthusiasts, we're already setting our sights on the next-generation Mazdaspeed3, rendered here by artist Theo Chin. To our eyes, it's not a very imaginative transformation, but is likely a spot-on rendering for what the next car will look like. And it's really, really hot.

While Mazda hasn't exactly confirmed that the new Speed3 will be coming, sources within the automaker have indicated that a third-generation version of the MS3 is under development. Thing is, the Japanese automaker wants to give the standard Mazda3 some time to grow in the market, so we might not see the new Speed3 until something like 2016, with a possible diesel version to arrive before then.

The big unknown, however, is what will power the new Speed3. Of course, we're big fans of the DISI 2.3-liter turbocharged inline four-cylinder that's currently used, producing 263 horsepower, but Mazda could certainly be developing something new. A turbo-four setup is a given, and power will likely fall closer to 275 hp for the new car. Bring it on. 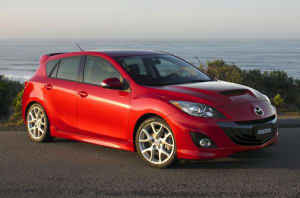