Zach Bowman
Volkswagen has officially built 30 million Golf units since the first hatch rolled off the assembly line in early 1974. The company says the accomplishment has cemented the compact's place as the most successful European car ever built, though we imagine the original Beetle might have something to say about that. Even so, Volkswagen says that statistically speaking, the company has sold 2,000 Golf units for every day of production. Chew on that notion for a moment. The Golf has remained relevant over the past four decades thanks to a steady stream of generational updates, and last year, the Volkswagen Golf took the honor of being named the World Car of the Year.

A Golf TDI was the 30 millionth unit produced, and Volkswagen says the machine will be on display at the automaker's Wolfsburg facility. You can read the full press release below for more information, including a generational breakdown of each Golf model.
Show full PR text
VOLKSWAGEN CELEBRATES THE 30 MILLIONTH GOLF

World's 30 millionth Golf drives off the assembly line in Wolfsburg

'Car of the Year 2013' award presented in Wolfsburg

Wolfsburg, 14 June 2013: As landmarks go, this is a pretty big one: the world's 30 millionth Golf has rolled off the assembly line at the Volkswagen plant in Wolfsburg – a new production record for the most successful European car ever. Production of the original Golf began in early 1974. Since then, statistically speaking, an average of over 2,000 people have purchased a new Golf every day for the past 39 years. The 30 millionth car is a Golf TDI BlueMotion; this recently introduced model has a fuel consumption value of just 88.3 mpg, making it the most fuel efficient Golf ever built.

On Thursday, Prof. Martin Winterkorn, Chairman of the Board of Management of Volkswagen AG, also officially accepted the "Car of the Year 2013" award for the Golf conferred by the 60 member international jury for the highly esteemed award. Prof. Winterkorn commented on both of these events: "The history of the Golf is also the history of automotive progress. With technologies such as the safe front-wheel drive of the first Golf, the debut of the TDI in the third Golf, ESC (Electronic Stability Control) and the dual clutch gearbox of the fourth Golf and the standard Automatic Post-Collision Braking System of the new generation, this car has continued to democratise progress. An optimum of safety, comfort and driving fun are no longer a question of money thanks to the Golf. And so our bestseller lives up to the Volkswagen name." The milestone vehicle will be officially on display for employees of the Wolfsburg plant this coming Saturday at the plant's open day.

Golf I (1974 to 1983): "It all began in 1974 with a revolution," is how Klaus Bischoff, Head of Design for the Volkswagen brand describes it. "The step from the Beetle to the Golf was revolutionary. A new vehicle layout was created with the conversion from an air-cooled rear engine to a water-cooled front engine and from rear-wheel drive to front-wheel drive. In terms of the car's styling, Volkswagen designers switched from round shapes to a rectangular design structure – based on the legendary design study by Giorgio Giugiaro".

Golf II (1983 to 1991): This was the Golf in which Volkswagen technologies such as the controlled catalytic converter (1984), ABS (1986) and all-wheel drive (1986) were introduced. In this generation, the model series also advanced to become a definitive icon. Marc Lichte, lead exterior designer for Volkswagen recalls: "Back then, one of the key moments in the history of the Golf was the decision by board members to further develop the styling of the Golf I and conceptualise the Golf II based on its "visual DNA". This set everything into motion, and Volkswagen created the foundation for continuous development of the model series."

Golf III (1991 to 1997): In 1991, Volkswagen initiated a new era of safety in the third generation. For one, the Golf III was the first model in the series to offer front airbags in 1992; for another, great progress in the area of body manufacturing led to further improvements in crash properties. The first TDI engine of the model series was also introduced in this Golf (1993).

Golf IV (1997 to 2003): Under the direction of the former Head of Design (Group) Hartmut Warkuß, a precise design was created that would pave the way for the future of Volkswagen. Today, experts look upon the Golf IV as a design icon and a pioneer for the series. But this Golf was also an engineering innovator with technologies such as ESC (1998) and the dual clutch gearbox (2002).

Golf V (2003 to 2008): It was the Golf, its comfort, dynamics and above all its quality that left many a competitor of the upper mid-class trailing behind. A value that illustrates the stability of the laser-welded body is the 35 per cent gain in torsional rigidity when the Golf V made its debut in 2003. The first Golf BlueMotion (4.5 l/100 km fuel consumption) – based on the Golf V – was created in 2007.

Golf VI (2008 to 2012): The body, once again welded by laser, was so safe that it performed with flying colours in EuroNCAP crash testing, attaining its maximum five star rating. The triumph of the TSI engines (high-tech petrol engines) and conversion of the turbodiesels (TDI) to the common rail system led to more dynamic performance and better fuel economy. The forerunner was the second Golf BlueMotion, which offered a combined fuel consumption value of just 3.8 l/100 km.

Golf VII (since 2012): Weight was reduced by up to 100 kg in the seventh generation Golf, reversing the much discussed upward weight spiral. Fuel consumption was reduced by as much as over 23 per cent compared to the previous model, depending on the specific engine. The forerunner of this movement is the Golf TDI BlueMotion with a combined fuel consumption of just 3.2 l/100km, and it is also the 30 millionth car produced. The Golf VII will definitely go down in history as the compact model in which an entire armada of new assistance systems made its debut. They are systems such as PreCrash preventive occupant protection and the Automatic Post-Collision Braking System – technologies that were more likely to be offered in the premium class than in the compact class previously. That too signifies a democratisation of automotive progress. 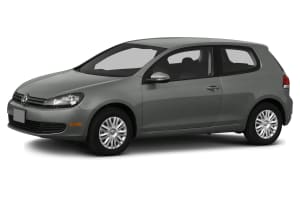