Every once in a while, I find myself, despite my solitary leanings and inherent modesty, working out in some kind of class setting. The tone and tenor of these classes ranges wildly – from the quiet, follow-the-leader variety, to those with a kind of Cult of Personality man or woman calling the shots, usually with idiom-laden shouting and theatrical hair. Despite their personal variation and range of professional effectiveness, there's one common concept that most instructors bring up at some point: working with intention.

The idea, as it relates to physical fitness, is that focusing your brain on the movement at hand ­– the rate of your own breathing, or the muscle groups being worked for instance – helps to perform the act efficiently and correctly. Having spent a happy majority of the last decade in an exercise-free near-debauch, I was a bit surprised to find out that this kind of mental game really works pretty well.

All of this is relevant to my current task at hand, telling all of you what it's like to drive the 2013 BMW 135is Coupe, because this is very clearly a car that rewards being driven with intention. Here, of course, I don't mean simply keeping both hands on the wheels, eyes on the road, and such, but actively judging your own inputs and the car's reactions to them. Good drivers (at least) are attentive most of the time, but it's rare that we have the patience for applying such purpose to this everyday act, unless, as is the case with the 135is, the car rewards us for it so fully.

This is a driver's car, not a Brookstone.

Brutal or pugnacious, stunted or compact, curvaceous or overwrought; it was most likely long ago that you decided how you felt about the 1 Series' styling. The additions made to make the 135is stand out from its fellows aren't likely to change your mind, either. The M Sport body kit is joined by model-specific 18-inch five spoke wheels, gloss black slats inside the signature twin-kidney grille and matching black-capped mirrors. The effect is just slightly less inflammatory than that made by the now-axed 1 Series M Coupe, and certainly far from what we like to describe as traditional coupe beauty.

Step inside and that same description can be leveled, though my guess is that most of the BMW purists will be happy about what lies herein. The simply spec'd cabin harkens back to the now-last generation of BMW cars, despite the fact that this is a 2013 model. (The whole 1 Series family hasn't changed much in the last five years.) The chunky M-badged steering wheel and shifter dominate the austere black and silver, workman-like interior. Blue stitching on the black leather seating surfaces is tasteful but far from daring in this segment, and that's about as wild as my test car got in terms of interior decoration. The lack of navigation or a big media screen, buttons for adaptive driving modes (or many buttons at all, truth be told) or an undulating, tri-leathered dash all help to emphasize that this is a driver's car, not a Brookstone store at the mall.

We're at least a few tenths of a second skeptical of BMW's modest 4.9-second 0-60 estimate.

Alternating between a similar seriousness and hilarity – depending on your state of mind and steering angle – BMW's TwinPower Turbo, 3.0-liter inline six-cylinder engine is pretty spectacular. The internally designated N55 engine has seen raises of 20 horsepower and 17 pound-feet of torque versus the 135i, for totals of 320 hp and 317 lb-ft. All of the torque is available from just 1300 rpm, with peak power coming at a loftier 5800 rpm, meaning that the 135is will pull hard from just about anywhere. That's including from a standstill, where we're at least a few tenths of a second skeptical of BMW's modest 4.9-second 0-60 mile per hour estimate.

The broad, flat torque curve may make this N55 slightly more boring than the peaky, naturally aspirated inline-sixes of BMW yore, but the sound of the thing leaves little to be desired. The BMW performance exhaust rips nicely from half-throttle onward, without sounding too puerile when driven moderately. My neighbors love that. With the radio switched off and the windows closed, you'll also catch a bit of shrill turbo whine as you accelerate and move through the gears. It's a sound that I find charming, though a different set of ears may not.

There's magic in the powertrain and controls when one starts to really lock in.

With diffuse focus or simple inattention, the 135is feels, more or less, like any other pretty-quick small luxury car. But there's magic in the powertrain and controls when one starts to really lock in, as I alluded to earlier. The seating position, the seats themselves and pedal and steering wheel position are big factors here. Even at six-foot, five-inches and pretty well packed into the BMW sport buckets, I found enough headroom and legroom to go with great positioning for the steering wheel and shifter. There's a good amount of room in the pedal box for a small car, too.

With everything falling so nicely to hand and foot, one quickly grasps that there's a higher degree of tactility in this BMW than almost any other in the automaker's stable right now. The thick-rimmed steering wheel is informative while still filtering some of the white noise from the road, the brake pedal is short of travel, responsive and not overly grabby and the throttle offers near-instant engine response with every flex of the foot. What's more, movements through the firm-but-not-stiff suspension can be easily judged by way of the steering feel and via the floorboards, offering an awful lot of driver control after just a brief period of learning the car.

There's not a paved road in the world that this car isn't prepared to let you enjoy.

I really enjoy using this six-speed manual, too, though I'll be the first to admit that it's not the world's finest shifter/clutch pedal combination. A little play within the shift gates and a slight feeling of bounce on the clutch are both acceptable tradeoffs for the higher man/machine involvement they engender compared to the seven-speed DCT and paddle shifters. There aren't a lot of current BMW products that I'd recommend buying with a stick shift these days, but the 135is is certainly one of them.

Set your mind to the task, and the total package of this 1 Series comes to life on a great, twisting piece of road. Even with gobs of torque flowing to the rear tires, I had to work to unsettle the BMW's fine balance when coming out of a corner. Mostly I just rode the great grip right through the apex, suspension-damping making the turn and weight transfer ultra smooth, and then dug into the throttle for a great gulp of exit speed. The unstressed underpinnings make the car pretty fantastic on the wide sweeping turns, while the quick steering rack enables fun on slower, more technical and steeply angled corners. Considering that the 135is is also just fine when doddling on the highway in a straight line, I feel comfortable in saying there's not a paved road in the world that this car isn't prepared to let you enjoy.

It's one of the best-driving BMWs in the lineup currently, and a proper scion to The Ultimate Driving Machine legacy.

In short, this coupe is subtle, and brilliant and a singular experience in the automotive world today. It's also one of the best-driving BMWs in the lineup currently, and a proper scion to The Ultimate Driving Machine legacy. Of course, the most serious competition for the 135is might come from the ever-so-slightly-less-good 135i Coupe. Drop the M Sport package on the 135i, and you basically have the same car – with leatherette in place of leather and missing the cosmetic package – with a few less horsepower and a price tag about $3,000 cheaper. Depending on how you buy it, the added grunt and double-spoke 18-inch wheels (part of the M Sport Package for the 135i) might be worth the extra coin.

Outside the family, there's not a lot of sort of natural competition, honestly. Spend more money ($53k) and you can have a slightly slower, less powerful and better at-limit handling Porsche Cayman, or a lot more money (almost $65k to start) for the in-all-ways-better Cayman S. V8-powered Mustang and Camaro models offer a lot more go-juice for less money than the 135is, but if you opt-in to the models that are competitive handlers, the Boss 302, ZL1 and upcoming Z/28 (I'm guessing), you're actually not going to spend much less. That may seem to work out in favor of the Americans, and it does if performance is your only concern, but the 1 Series is obviously a much more subtle statement, too. The Audi TTS is less powerful and gives less dynamic handling joy, and asks more money to start. I think you see my point.

The reason that the 135is (and previous 1 Series in general) get compared to the great E30 and 2002 models of BMW's storied past is often silly: They were small cars, and this is a small car. The true heritage that bleeds from those classics into this 1er is the ineffable feeling of satisfaction that comes after driving a stretch road really well. Give your attention and intention when you drive the 135is – the payoff is right around the next corner. 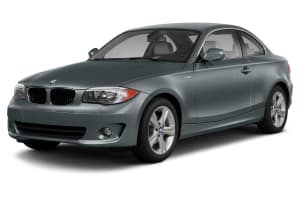