About six months ago we tested the all-new 2014 Maserati Quattroporte GTS and its 523-horsepower 3.8-liter bi-turbo V8 engine, the latter being built in Maranello, Italy, by Ferrari. There were comments on both sides, mostly positive though, and we came away impressed by the sixth-generation Maserati sedan. This despite the fact that both we and you couldn't seem to get past the questionable aesthetics of the 20-inch Crono alloy wheels slapped on all of the test cars. Awkward looking they are, or is "distinctive" the word we're seeking?

For both the crucial United States market and the rest of the world, the most important version of the latest Quattroporte is bound to be the less powerful (and less expensive) bi-turbo V6 model we have just driven here in northern Italy; both rear-wheel-drive and Q4 all-wheel-drive versions. We spent nearly all day in the 404-hp 2014 Maserati Quattroporte S Q4, and found a lot that we prefer in the six-cylinder powertrain versus the champing aggression and $140,000 price tag of the GTS bi-turbo V8 model. These long and lanky executive-style statements traditionally thrive on the V8 mantra, so it will be interesting to watch how Maserati's need to use stronger and more efficient V6 engines is received by its six-figure customers.

It's a cynical thing to discuss so matter of factly, but descending into five-figure pricing for these rides actually damages their sales potential. It's bizarre, but keeping every trim of the Maserati Quattroporte north of $100,000 was crucial. So, is the 2014 Maserati Quattrporte S Q4 at a projected $108,000 base price worth it? To this stratum of clientele, apparently it is. Even the rear-wheel-drive S with this bi-turbo V6 will come in around $102,000 when it arrives in North America in mid-2014. (Or mid-2015, as yet to be decided.)

The essential changes made for S models naturally regard the all-new "156" bi-turbo 60-degree 3.0-liter V6 engine, sitting low and far back in the engine bay to aid dynamics during drives involving frequent weight transfer moments. We were on one of the more wonderful proving ground circuits near the Alps between Turin and Milan at the Fiat-Chrysler facility called Balocco, but we also hit real roads that cut through the widespread rice fields of the area. It was an on-again, off-again rainy day, so we also had a range of surface conditions.

That last point is good, because the other serious novelty here is the Magna Steyr all-wheel traction system, called Q4 within Fiat-Chrysler, a system that closely replicates what xDrive does for the four wheels of any BMW model thus equipped. This weather fit in nicely with what we wanted to see from the Quattroporte S Q4. Under default normal highway cruising conditions, all torque is sent to the rear wheels, but it can be sent in varying proportions, whenever needed, to any of the four wheels.

Right away we preferred the behavior of this 3.0-liter bi-turbo V6.

Right away we preferred the behavior of this turbo V6 as it mates with the three modes – Normal, Sport, Manual – of the really good eight-speed ZF automatic gearbox. When we drove the 3.8-liter bi-turbo V8 – called "154" – over stunning and narrow southern French mountain roads last year, we definitely had a mighty thrill, and were somewhat blown away by the big beast on both little streets and highways. But the added beauty of the bi-turbo V6 with 407 pound-feet of torque between 1,750 and 5,000 rpm is the malleability of the powertrain via the throttle mapping, even while in Sport mode.

Granted, the ferociousness of the bigger V8 while getting on and off throttle, especially in Sport mode, would be part of why someone might buy that car. Maserati tells us that the global take rate for its top GTS trim will be around 15 percent of total production, while in the United States that will reach as high as 25 percent. The rest of the Quattroportes bound for the US will be mounted with this new Ferrari-Maserati V6 in S trim. By the time the full lineup of Quattroportes meant for the States is on the ground and selling, it should fall out at 20-25 percent GTS, 60-65 percent S Q4, and about 20 percent for the rear-wheel-drive S model.

We wouldn't ever order our Quattroporte S Q4 with these optional 21-inch Titano multi-spoke wheels.

With the 207.2-inch long, 76.7-inch wide Italian stallion weighing a reasonably light 4,214 pounds (35 pounds up versus the V8 GTS), all-wheel drive is highly desirable for corralling everything with real sophistication. The Q4 system managed pretty brilliantly for a few 3.0-mile hot laps on the very dynamic area at Balocco called Le Langhe. It was so good that we quickly switched the stability control all the way off and just had at it (see video). We were holding a pleasant small drift through entire sweeping left and right corners without having to change the throttle angle much at all.

We wouldn't ever order our Quattroporte S Q4, which starts deliveries here in July, with these optional 21-inch Titano multi-spoke wheels. If our Q4 were a daily driver and also in a zone with four seasons, we would stick with the standard and very handsome 19-inch Tritone wheels, even if the wells in which they fit might look less bitchin' than they do with the 21s, or even the available 20s. There are no run-flat tires on Quattroportes – yay! – and the steering is still pleasantly responsive and hydraulic – more yay. The steering wheel on Maseratis is nicely vertical, and the shift paddles, though mounted to the steering column, remain the best around because they are big and we can always easily snap the gears up and down without fumbling.

In the end, the bi-turbo V6 makes 0 to 60 miles per hour happen in an estimated 4.6 seconds, just 0.2 seconds less quick than the V8. This is the better package. There will be fewer peaks and valleys in the performance, and therefore fewer shocking bursts of emotion, but more satisfaction more often while aboard the S Q4 ship. And it costs $32,000 less than the GTS V8.

Maserati is getting there aggressively with this new onslaught of investment in its product lineup. The big challenge now is re-convincing people that Maseratis should be on the same shopping lists as German and Japanese premium rides. The total price tag to Fiat-Chrysler for this push is about $1.6 billion, but the technology and strategy gains here with the Quattroporte and Ghibli and future Levante cross-SUV will find their ways throughout the corporate family. One more potential trick up the Quattroporte's sleeve that remains under discussion is a Q4 version of the V8 bi-turbo GTS.

By as soon as next summer, the Quattroporte lineup will be all in place in the States and have something for every luxury buyer, plus a little something no other manufacturers of these big sedans can offer: It's one hot Italian and can act like it, right down to the warm-blooded latin sounds coming from the quad tailpipes. 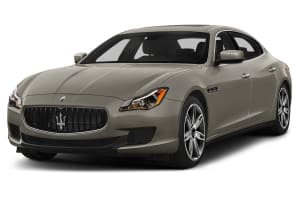