It has been five years since the last major redesign of the Nissan Sentra. Nissan showed the world its new, elegant design just over a month ago, and now we have been clued into the Sentra's pricing.

Anyone looking to get their hands on a 2013 Nissan Sentra, in base "S 6MT" trim, will have to spend $15,990 (not including a destination charge, which has not yet been specified, though is likely to run $760 as on the '13 Altima). If you'd like the base S model with the Xtronic CVT transmission it will run you $17,260,

The Sentra comes with a 1.8-liter inline-4 making 130 horsepower and 128 pound feet of torque. All models, save for the S 6MT, send power to the front wheels through the CVT transmission, offering fuel economy of 30 miles per gallon city, 39 highway. Those looking to take advantage of the 40 mpg highway in the S FE+ model will have to throw down $17,660. There is also a mid-pack FE+ SV trim, which fetches $18,870.

If you'd like the SR trim be prepared to spend $18,870. The range topping SL features heated side mirrors with integrated turn signals, push-button start, dual zone automatic climate control and Bluetooth hands-free connectivity at a price of $19,760.

To find out more about the new Sentra, click below to check out the press release.

FRANKLIN, Tenn. – Nissan today announced that the all-new 2013 Nissan Sentra compact sedan will be priced from $15,990 when it goes on sale at U.S. Nissan dealers nationwide beginning October 16. The redesign of Sentra focuses on class-above design standards inside and out, as well as efficiency in engineering.

The new Sentra is five percent lighter than the outgoing model, yet has slightly larger overall dimensions and more interior room. The lighter and more aerodynamic new Sentra allows Nissan to use a more fuel-efficient 1.8-liter engine, which along with the next generation Xtronic CVT® with sub-planetary gear helps deliver a 13 percent improvement in EPA combined fuel economy (versus the previous generation Sentra). Sentra FE+ S and FE+ SV grades achieve 40 mpg on the highway. Other CVT-equipped models are rated at 39 mpg on the highway. All CVT models achieve a best-in-class* EPA rated 34 mpg combined (City and Highway) and a more than 415-mile real-world driving range***.

Manufacturer's Suggested Retail Prices** (MSRP) for the 2013 Nissan Sentra include:

About the 2013 Nissan Sentra
Like the totally re-invented 2013 Nissan Altima and Pathfinder, the all-new 2013 Nissan Sentra's total makeover focuses on a class-above look and feel – with a 0.29 coefficient of drag (versus the previous 0.34 Cd), best-in-class* 34 miles-per gallon combined highway/city fuel economy, a more than 415-mile real-world driving range**, and an outstanding 37.4 inches of rear seat legroom to name just a few. Not surprisingly, the all-new seventh generation design stands as the most innovative Sentra ever in the nameplate's 30-year history.

Sentra's all-new exterior is elegant, modern and refined, reflecting a "professional" character targeted at upwardly bound buyers who aspire to drive something more premium than some of the other designs in the segment. It adopts Nissan's bold new signature trapezoid-shaped grille and large wraparound headlights with LED accents – the only sedan in the compact segment to offer them as standard equipment. In the rear, LED taillights are also standard, which complements the sophisticated styling. Sentra's sophisticated new look continues inside with a high-quality interior design with materials not usually found in compact vehicles, including soft-touch instrument panel and front door armrests, available leather-appointed seating and available Maple wood-tone trim.

Every 2013 Sentra features a standard 1.8-liter 4-cylinder engine, with a choice of 6-speed manual transmission (Sentra S only) or next-generation Xtronic CVT® with sub-planetary gear. 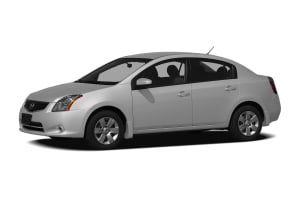