As if its cars aren't already exclusive enough on their own merit, Rolls-Royce is debuting an ultra-limited production version of the Phantom Coupe at Pebble Beach today. With only 35 cars expected to be built, the Rolls-Royce Phantom Coupe Aviator Collection celebrates Charles Stewart Rolls – Rolls-Royce co-founder – who had a passion for flying and was only the second man in Britain to have a pilot's license before his death in 1910.

Unique elements of the Phantom Coupe Aviator Collection include the Aviator Grey exterior hue accented with a matte finish on the grille, hood and window frame. Setting the aeronautical theme of the car, the interior is fitted with exclusive features like the matte-black instrument gauges, an aviation-grade clock in the middle of the dash and a lower dash veneer that mimics the look of an old wooden airplane propeller. Even the transmission tunnel boasts an anodized aluminum cover with exposed torx-head bolts which attempts to match the fuselage of Rolls' award-winning (and Rolls-Royce-powered) Supermarine S6B aircraft.

No detail was overlooked in creating a truly unique atmosphere for the Aviator Collection so much so that it has a leather-lined glove box with the following quote from Rolls himself embossed into it:

"The power of flight is as a fresh gift from the Creator, the greatest treasure yet given to man."

Rolls-Royce has not announced any pricing for the 1-of-35 Phantom Coupe Aviator Collection, but you know how the saying goes: "If you have to ask..."

Inspired by Charles Stewart Rolls and the legend of the Schneider Trophy-winning Supermarine S6B (powered by a Rolls-Royce R Type engine), Rolls-Royce Motor Cars proudly present the Phantom Coupé Aviator Collection. The collection celebrates the spirit of human endeavour that drove a very British hero and subsequently led Rolls-Royce to simultaneous world speed records on land, air and in the water.

The first in the collection of 35 Phantom Coupé Aviator Collection models – which feature a suite of exclusive design concepts, colour combinations and new materials – debuts today at the Pebble Beach Quail gathering in the United States.

"Our founding forefather Charles Stewart Rolls was a pioneer who pushed the boundaries of motoring and aviation to the limit," said Torsten Müller-Ötvös, Rolls-Royce CEO. "With our exclusive Phantom Coupé Aviator Collection we celebrate this great British hero, presenting a car which hints at experiments in early flight married to the best engineering, modern design and exquisitely crafted materials. The collection takes Rolls-Royce Bespoke to new levels of subtle, yet beautiful detailing."

Finished in Aviator Grey, the Phantom Coupé Aviator Collection features a contrasting matt bonnet, window and grille surround while inside, the interplay of wood and metal hint strongly at a cockpit theme. A Thommen, aviation-grade clock with blood orange needle tips is embedded in the metal foil upper fascia, complemented by matt black dials for power reserve, speedometer and fuel gauges.

Between 1931 and 1933 the Schneider Trophy was held in the South of England, soaring over the Solent and the Witterings in West Sussex, a location no more than 10 miles from the current Home of Rolls-Royce Motor Cars in Goodwood, England. Collection cars celebrate the victorious S6B aircraft with transmission tunnel in anodised aluminium with exposed torx fixings and swage lines that echo the oil cooling veins on the S6B fuselage side. These highlights are repeated on collection car armrests.

The leather-lined glove compartment includes an embossed Charles Rolls quote following his first flight with the Wright Brothers in 1908: "The power of flight is as a fresh gift from the Creator, the greatest treasure yet given to man." A centre console chrome plaque describes Rolls – only the second man in Britain to hold a pilot's licence – simply as Pioneer Aviator, below a representation of his sweeping signature.

Fitted with leather floor mats, Aviator Collection cars have also been designed to incorporate the Rolls-Royce of cup holders. Beautifully engineered in highly polished aluminium, the designer's aim was to deliver functionality, but with that special combination of theatre and jewellery, both of which are expected by every Rolls-Royce client. 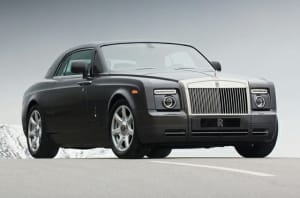