John Neff
They're lifting glasses of bubbly in Bologna today as Lamborghini celebrates the Aventador reaching a significant milestone in its young history: 1,000 units produced. The 1,000th Aventador is painted Argos Orange and destined for Germany, where it will share space in Bavarian architect Hans Scheldecker's garage with a Diablo.

What's most impressive is that Lamborghini's latest supercar has reached that milestone after only 15 months of production. It took the Aventador's predecessor, the Murciélago, nearly three years to convince 1,000 customers to buy into the Lamborghini lifestyle, and that supercar went on to sell just 4,099 units during its nine-year run.

Credit the operating efficiencies of the Volkswagen Group, Lamborghini's parent company, for teaching the niche automaker how to build excellence at scale. According to Lamborghini, last year the Sant' Agata Bolognese plant's rate of productivity was three Aventadors per day, and today it's up to 4.5. The Aventador, however, has a long way to go beat Lamborghini's all-time best-seller, the Gallardo, which built its 10,000th copy in 2010 and is fast approaching the 12,000 mark.
Show full PR text
A milestone for Automobili Lamborghini: 1,000 Aventadors produced

The Lamborghini Aventador LP 700-4 today achieved an important milestone in its history, with the 1,000th vehicle produced. The Argos Orange vehicle with chassis number 1,000 rolled off the assembly line, destined for Germany. Its new owner, Hans Scheidecker, received the keys today from Automobili Lamborghini President and CEO, Stephan Winkelmann. The Bavarian architect is a passionate Lamborghini customer, already owning a Lamborghini Diablo.

The Sant' Agata Bolognese plant's productivity has noticeably increased for the Aventador LP 700-4 compared to the previous flagship model: the Murciélago took two years and five months before the 1,000th example rolled off the assembly line. Launched at the Frankfurt Motor Show in 2001, the Murciélago reached the 1,000-vehicle milestone in February 2004. The Aventador has taken just one year and three months, with production increasing from three vehicles a day in Q3 2011 to 4.5 today.

This production milestone is not the only accolade for the V12 super sports car from Sant' Agata Bolognese. Indeed, little more than a year from its official debut, the Aventador has been crowned queen of the super sports cars with no less than 36 international prizes for its design and innovative technological solutions. The success of the Aventador is also demonstrated by its order book, which continues to cover the next 18 months of production. 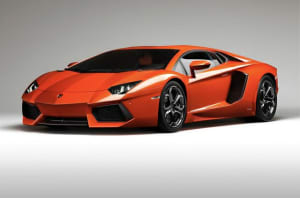