As the years go by, it's become the Germans who are most closely watching what each other are doing over the backyard fence. So much so, at times, that it can almost seem like they're freely swapping all their trade secrets unapologetically in full view.

Take this nicely executed new luxo-niche player, the BMW 6 Series Gran Coupe. It's no scoop, of course, that it was created specifically to not miss out on what both Mercedes-Benz and Audi are discovering for themselves with the CLS and A7. And yes, that "nicely executed" modifier just used to describe the Gran Coupe could indeed ring with more enthusiasm.

The 640i Gran Coupe we sailed around in all over Sicily under a crisp sun is a generally good-looking machine. BMW designers have taken the existing Big Bimmer language and successfully created a new dialect for the company, if you will. But these "four-door coupe" creations are curiosities for which many develop a love (or, occasionally, a distaste) for over the long run. Only the first-generation CLS in 2003-04 absolutely socked it to us at first glance, and since then, everything else in the genre has felt derivative. Well, they essentially are blatant derivatives, right?

It would be great if the automakers' marketing departments would please cease and desist when it comes to trying to push these prettier sedans on us as though they were actually coupes. They just aren't. We all love a good sedan, so why the massive effort to co-opt the inherent sexiness of a coupe right down to how the car is used by the buying public? These are lifestyle sedans and they're all pretty fascinating executions. However, we do tip our hats to Audi for owning the Sportback moniker. That sounds about right.

The 6 Gran Coupe is a true mix between the 5, the 6, and the 7 Series cars. It's better looking in some key ways than either the latest 5 or 6 Series models – front, rear and profile views, for starters. Still, it's the 7 Series that comes off feeling like the most complete package for the segment it is meant to represent. At least, that is, for this current generation of large BMW cars.

After spending a full day in the 640i Gran Coupe with the full-on BMW Individual interior treatment, we can say that everything inside the cabin works well, perhaps to a best-in-class degree. Space for four adults is exceptional and is both extremely well-crafted and comfortable. The four-plus-one seating promise in back isn't exactly a revelation, but it's possible. Without the spare tire and with the fully folding rear seat, luggage space is a respectable 44.7 cubic feet. The luxury and level of indulgence are spot-on for this new player in the segment.

Keeping in mind those various weights and measures just listed, we were really curious to see what the result would be over the slippy road surfaces of Sicily. The overall weight is not a surprise for this 640i, but the 3.0-liter TwinPower Turbo inline-six with 315 horsepower was perfectly fine for our less-than-ambitious requirements of this executive/family/lifestyle car.

It's the 330 pound-feet of torque – available as low as 1,300 RPM – however, that allows this engine to work in this above-average-sized BMW. Acceleration to 62 miles per hour is quoted at 5.4 seconds, but we firmly believe that extreme testing will no doubt result in a 60-mph run in around 5.0 seconds flat. That off-the-line speed is more than sufficient, but the real test is how we felt in the 640i GC while humming between the third, fourth and fifth gears of the standard eight-speed Steptronic automatic, overtaking diesel-smoke-chuffing fuel tankers, and slipping through the hundreds of roundabouts that Italy has so fallen in love with.

Under these everyday dynamic circumstances, the 640i Gran Coupe is absolutely at its ease and there is honestly not a negative note regarding the chassis, steering, gearbox, or engine. BMW has so completely honed this ideal setup for all its larger vehicles to such an extent that we practically knew this would be the case before ever pressing the Start button.

Where we did notice a couple of negative discussion points, however, was during our shuffle along the autostrada at about 80 mph – the Italian legal limit on most multi-lane highways. The overall general comfort we found with the Driving Dynamics Control interface was perfectly fine whether in any of the Sport or Comfort setups, but where we found things less than optimal – no matter the setup in DDC – was when driving over expansion strips and the like. The mapping for the rebound traits of the dampers is not quite where it should be for this character of car. There was a sort of 'jiggle' after each strip was slapped by the weighty and hard Michelin Primacy HP run-flat tires, measuring 245/40R19 in the front and 275/35R19 at the rear. (For reference, the standard wheels and tires available in North America are 18-inchers, and the wheels seen on this test car are currently not available Stateside.)

If we really wanted to own the 640i Gran Coupe, we'd consult BMW techies about the best 18- or 19-inch all-season radial we could buy since this post- kathump jiggle is really odd on an otherwise very good chassis setup. Under dynamic circumstances, this is not noticeable as much, and we imagine that over pristine German pavement, the dampers would be about perfect. Nonetheless, we can get a 740i to where it is smoother than this in straight cruising, though that's possibly due to the added weight. Still, why not here? We want an expensive BMW cruiser 6 Series four-door that costs more than the 740i to be able to give us a more refined damper rebound while driving along less-than-perfect pavement.

Another negative observation was sort of an easy target when you consider the car's design: the compromised rear window visibility. Getting the rear-view mirror set for optimal viewing through that slender rear glass took an unusual amount of time and you simply have to accept the compromise as a consequence of your sweet lookin' new car. The high sides and low profile greenhouse mean that we needed to adjust the seat higher, bringing the head on your author's six-foot-tall frame just a little too close to the headliner. And with the sliding glass roof – a standard feature in North America – your dear author's head would get even a little closer.

But the most important quality of the 6 Series Gran Coupe is indeed its interior – the living space. Even without a BMW Individual makeover, the design is pretty luscious and doesn't seem to be overwrought. The cockpit has never been so driver-oriented in a BMW, while the front passenger side feels practically like a cocoon in how it wraps that person in leathery goodness. A nice detail is that the leathers and touch surfaces on the front passenger side are softer for comfort, while those on the driver side are a bit firmer and hold the pilot better in place. As for the back seats, when we had the front chairs adjusted for this six-foot-tall driver, our knees had a good four inches of clearance from backside of the front seats. What's more, our tootsies slid very nicely under the forward passenger squabs.

A 402-horsepower Mercedes CLS550 with its 4.6-liter twin-turbo V8 starts at $71,300 and an Audi A7 with its 310-horsepower supercharged 3.0-liter V6 can start as low as $60,600 when modestly equipped. The 650i Gran Coupe, featuring a 443-horsepower, 4.4-liter twin-turbo V8 that arrives a little later this year is set to start at $87,395. Yes, there's plenty of standard kit on these 6 Gran Coupes, but these are some heady prices for the privilege of a svelte lifestyle sedan. Blame it partially, we suppose, on the Germans' total frustration with the ongoing bad exchange rate between the suffering United States dollar and over-valued Euro.

We thought we were in an economic crisis, but apparently, the Germans have created so much value in the brands that they can do this. With pricing-to-trim trends like these, now everyone German and otherwise is bound to scooch the prices up as they catch wind of what the others are able to get away with over the backyard fence. 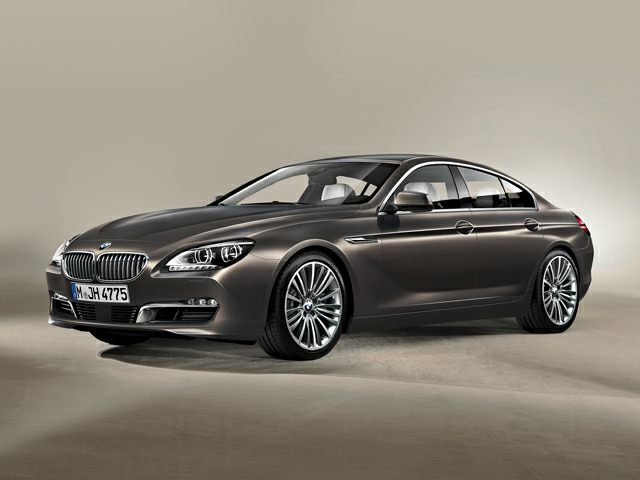