Zach Bowman
It looks as if Nissan may have inadvertently revealed part of the 2013 Altima ahead of its debut. The keen-eyed crew over at Inside Line spotted a completely undisguised version of the four door in a promotional video on Nissan Japan's YouTube channel. While we've seen test vehicles in various states of disrobe for a few months now, this is the clearest view yet of the next-generation Altima. We can clearly see the vehicle's 370Z-inspired headlights and the hint of a more pronounced grille as well as more emotive bodywork.

You may recognize that character line as the similar to the one found on the 2013 Pathfinder. Were we the betting types, we'd say we can expect to see that detail crop up on other Nissan offerings soon as well.

Will the new lines be enough to help the Altima keep its momentum up in the family sedan marketplace? We're going to hold off judgement until we see the final product in the flesh, but we will say the vehicle will find itself nose to nose with some increasingly threatening competition. With redesigned versions of the Ford Fusion, Volkswagen Passat and Toyota Camry intent on carving out larger slices of the mid-sized pie, the 2013 Altima will have its work cut out for it.

As you might expect, Nissan has since nixed the video with the Altima in it, but Inside Line was quick enough to grab a few screen shots. Head their direction for a closer look. 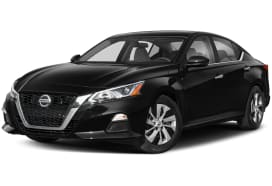