Yes, it's a tired trope. But if there's a pair of well-off empty-nesters, the husband drives a Mercedes-Benz SL and the wife has an SLK. Stereotypes become stereotypes for a reason: As often as not, they're true.

But to dismiss this latest SLK as yet another Executive Assistant-spec coupe/cabrio is to miss three important letters on the boot: A, M and G. Yet again, the crew from Affalterbach have butched up the smallest offering in the Benz lineup, taking the proverbial velvet hammer to the "Chick Car" cliche. The rear wheels of the 2012 SLK55 AMG are driven by V8 power and its brakes and suspension bits have been beefed up for the occasional back road bonanza or high-speed highway assault. And unlike the BMW Z4 that's simply begging for the M treatment, Mercedes actually has die Hoden to build a testosterone-infused droptop. And we can't thank them enough.

Like past AMG-fettled SLKs, it takes a keen eye to spot the differences from the standard model. The SLK55 gets a reworked front fascia, rear spoiler, chrome exhaust tips and AMG-specific 18-inch aluminum wheels wrapped in sport rubber. The seats benefit from some additional bolstering and carbon fiber trim lines the dash, doors and central tunnel. It's more refined than racy – typical of AMG's entry-level offerings – and if you still want to enjoy the overhead sights with the top up, you can add the trick Magic Sky Control roof panel available on the standard SLK.

For the first time in far too long, the badging on the back of this Mercedes actually correlates with engine displacement. In this case, the "55" refers to the 5.5-liter V8 – internally dubbed M152 – that differs from the twin-turbocharged M156 replacing the 6.2-liter V8 throughout the AMG line. Packed with variable valve timing and direct injection, this naturally aspirated engine churns out 412 horsepower at 6,800 rpm, while 398 pound-feet of torque effortlessly shoves you past its 4,500 peak. Coupled with the AMG Speedshift Plus seven-speed automatic, the 3,549-pound two-door hits 60 mph in 4.5 seconds before maxing out at its electronically limited top speed of 155 mph.

Even with all that luxury-laden weight, the SLK55 scoots around town and on the freeway with assuring authority, the seven-speed auto 'box running up and down the ratios with smoothness and precision whether leaving it in Drive or flipping the aluminum paddle shifters.

The counterpoint to that refined drivetrain is a positively raucous exhaust note that's sure to challenge owners to avoid putting the top up when the temperature demands a down jacket. With turbocharging becoming the favored power-boosting and fuel-conserving technology, a meticulously crafted set of pipes unencumbered by a set of snails is a rare treat. And with the heated Airscarf system in the seats and wind deflector behind the headrests, even a chilly Northern California morning did little to dampen the fun.

Just as compelling – if not as thrilling – is the V8's ability to cut spark and fuel to cylinders two, three, five and eight, and then closing the valves to turn the 5.5-liter into a 2.75-liter four-cylinder. The deactivation is as seamless as we've experienced, only going into effect under light loads between 800 and 3,600 rpm, yet still delivering 170 lb-ft of torque. The only noticeable change is "ECO4" replacing "ECO8" on the display between the tach and speedo and a subtle alteration of the exhaust note, which instantly changes back to full-on burble in a scant 30 milliseconds. Interestingly, AMG's engineers say that cylinder deactivation shouldn't happen when the top is down, but we experienced the system engaging on several occasions – something we chalked up to the pre-production units on hand. Engine start-stop is also part of the package, and while Mercedes hasn't announced official fuel economy numbers, during our testing, we managed an average of around 25 mpg in mixed driving – commendable when you've got over 400 horses at your command.

During a run through the hills just outside Laguna Seca (if you're a local, you know the road), the SLK55's upgraded brakes handily reined in the coupe time and time again. If there were any fade, we didn't feel it, even as the modified traction control system lightly gripped the outside rear wheel's caliper to aid turn-in. Steering feel was surprisingly quick, nicely weighted and equally communicative – something recent AMGs have begun to excel at – although on-center feel was still Mercedes-grade light. But considering its intended purpose, the steering suits the SLK55 just fine. The reworked suspension (multilink front and rear with retuned springs) combined with the grippier rubber refused to be unsettled over sections of pockmarked pavement, and when traversing some of Monterey County's mountain passes, the SLK stuck right up to the edge of our public road comfort zone.

Although Mercedes booked Laguna for the afternoon, the SLK wasn't bound for the Corkscrew. Track time was intended for another AMG creation. And as it should be. The $70,000 (estimated) SLK55 isn't a sharp-edged track tool – it's a spirited grand tourer with a performance punch. It's for those who enjoy brisk Sunday drives and a soundtrack to match, all while blowing cliches out their quartet of exhaust pipes. 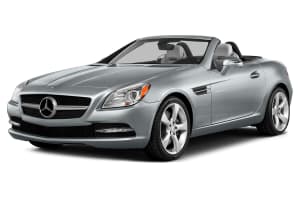