Aston Martin gets to work on new V12 Vantage GT3

Noah Joseph
It seems to us like Aston Martin never tires of rolling out ever hotter renditions of its Vantage sports coupe. As if the original V8 Vantage weren't enticing enough, Aston then shoehorned a V12 under the hood. Zagato then rebodied what we already thought was one of the shapeliest beasts on the market. And the improvements just keep on rumbling in. But then there's the racing versions. Oh, the racing versions!

The N24 showed us what it meant to take beauty to the beast that is the Nürburgring. Then came the GT4 racing model, followed by the even hotter GT2. The category in-between used to be tended to by the DBRS9, but now Aston's opted to replace it with yet another competition version of the Vantage.

First teased back in April, Aston revealed further photos and details of the V12 Vantage GT3 in August, and the British marque has now commenced track testing of its latest racing machine. Packing a 6.0-liter V12 with more than 600 horsepower and enough wings and ducting to make a fighter jet blush, the new Vantage GT3 has already covered a thousand kilometers of shakedown running while gearing up to take on series like the FIA GT3 championships, the Blancpain Endurance Series and the VLN Nürburgring series.

Like what you see? There's a fresh pair of images we've added to our gallery, and a whole mess of specifications in the press release after the jump, so check 'em out and start dreaming of racing glory.
Show full PR text
ASTON MARTIN RACING BEGINS TESTING THE V12 VANTAGE GT3

After two days behind the wheel, Turner said: "The car ran like clockwork throughout and we've managed really good mileage already. The feeling of the V12 Vantage GT3 is a massive step forward from the DBRS9. Being based on the smaller Vantage it is more responsive and feels more nimble, giving the driver plenty of confidence to extract all the performance from the V12 engine while also being light on its tyres. It isn't too physical to drive and I didn't even break into a sweat during the test!

"With the clean styling and the amazing sounding V12, it's closer to the core values of Aston Martin's road cars than any of the racing cars we've ever built. I'm certain it'll become a favourite among motorsport fans in no time at all."

The design and engineering of the new V12 GT3 endurance racer has been led by Aston Martin Racing's Chief Engineer for GT, Dan Sayers. The team is now embarking upon a rigorous development and sign off programme, which involves extended testing of the car at competition speeds to ensure the longevity of all critical components.

The V12 Vantage GT3 is a direct replacement for the Aston Martin DBRS9, which first competed in 2006 and went on to score many race and championship wins including the 2007 British GT Championship and the 2009 FIA GT3 Teams' Championship. Sharing Aston Martin's renowned bonded aluminium VH body structure and 6.0-litre V12 engine with the road-going V12 Vantage, the new racer is the culmination of six years' experience competing at the forefront of all major international GT series.

Aston Martin returned to GT racing as a factory team in 2005 with the DBR9 GT1, which went on to record back-to-back victories at the 24 Hours of Le Mans in 2007 and 2008, as well as winning this year's FIA GT1 World Championship.

John Gaw, Aston Martin Racing Managing Director, said: "The testing of the new V12 Vantage GT3 has gone really well. We haven't had any significant issues with the car, despite having covered close to 1000 kilometres, exceeding all our expectations in the car's first track test.

"The Vantage GT3 is the ultimate expression of all the experience that Aston Martin Racing has gained in the past six years. The DBRS9 still has a year of FIA homologation remaining, which effectively makes 2012 a development year for the V12 Vantage GT3."

It uses a significantly revised version of the DBRS9's 6.0-litre V12 engine. Changes include a lightweight crankshaft, dry sump lubrication and new valve trains for even greater performance and reliability.

The V12 Vantage GT3 will be eligible to run in all FIA GT3 and national GT3 championships; the Blancpain Endurance Series; VLN and the Nurburgring 24 Hour endurance race.

Braking is by six pot calipers at the front and four pot items at the rear, with ventilated discs all round and manually adjustable brake bias. The suspension is double wishbone type with uniball bearings and two-way adjustable dampers front and rear.

Aston Martin Racing will continue with the V12 Vantage GT3's comprehensive testing programme into the New Year and beyond. 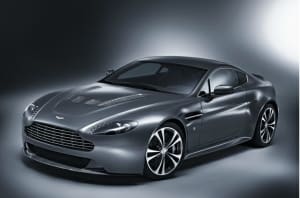