Lexus may stop production of the HS 250h. Reports have emerged that the model is suffering from flagging sales and that the luxury automaker may seek to replace the vehicle with a less-expensive, more youth-oriented product in the near future. Last month, Lexus managed to sell just 250 HS 250h units, which is a decline of 72.8 percent compared to the same (already low) period last year. Originally envisioned as a more upscale version of the Toyota Prius, the awkwardly styled HS 250h carries a substantial price tag that has likely done much to scare off would-be buyers. At over $37,000, the vehicle hasn't done a good job of convincing consumers of its merits. The modelhas only been on sale since late 2009 as a 2010 model, so if the reports are true, the HS 250h would lead a very brief life.

Should Lexus decide to kick the hybrid four-door off the team, the company will likely replace it with something more accessible for buyers. Reports suggest that the newcomer will likely cost somewhere around $30,000 and follow a marketing path similar to what's seen with the current CT 200h hatchback, a model that's been much more successful. That sounds nice, but we have to wonder if Lexus really needs two compact hybrids in the same price range. 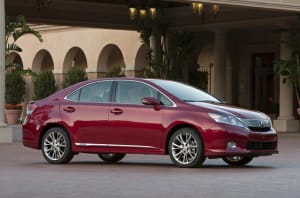