The 2012 Jeep Wrangler is one of the most capable off-roading vehicles on the planet, and Petersen's 4-Wheel & Off-Road has taken notice. The Wrangler Rubicon has been named 4X4 of the Year by the magazine, beating the Dodge Ram Power Wagon for the honor.

The award is the third for the Wrangler, and the 12th award in 30 years for the Jeep brand. The Rubicon took the trophy after acing a 1,000-mile trial that evaluates vehicles' performance in dirt, mud, sand, rocks, gravel and highway driving.

For 2012, the Wrangler lineup ditched its old, unloved 3.7-liter V6 in favor of the 285-horsepower Pentastar V6, as well as the various interior refinements that have been in place since the 2011 model year. The changes, coupled with the Wrangler's established off-road pedigree, were enough for it to take top honors from Petersen's 4-Wheel & Off-Road.

Rick Péwé, the mag's editor-in-chief, called the Rubicon "the most competent 4x4 ever produced," adding that the Jeep "allows you to take the trail less traveled without worrying about the journey." Hit the jump to read Petersen's press release.
Show full PR text
EL SEGUNDO, Calif.--(BUSINESS WIRE)--Petersen's 4-Wheel & Off-Road magazine has named the 2012 Jeep Wrangler Rubicon the winner of its coveted 4x4 of the Year award. This is the 30th year of the enthusiast magazine's in-depth competition of new 4x4 vehicles, and the third time the Jeep Wrangler has taken home the award. In fact, Jeep products have won the award more than any other mark, a total of 12 times for different Jeep vehicles.

Jeep Wrangler Rubicon was pitted against the worthy Ram Power Wagon, both solid-axle titans of the off-road world. The Jeep Wrangler Rubicon ranked high in every category of this year's in-depth test. The grueling 1,000-mile trial evaluates each vehicle's suspension, engine, transmission, and transfer case along with the style and creature comforts the vehicle provides. Most importantly, the 4x4s are judged heavily on how well they perform off-road in dirt, mud, rocks, sand, and gravel, as well as on the highway.

"The 2012 Jeep Wrangler Rubicon is the most competent 4x4 ever produced," said Rick Péwé, editor-in-chief of Petersen's 4-Wheel & Off-Road. "The Rubicon gives you complete confidence in its terrain tackling abilities. It allows you to take the trail less traveled without worrying about the journey. And it does so while leaving a smile on your face. This is one fun ride."

"No one puts a vehicle to the test more thoroughly than the editors of Petersen's 4-Wheel & Off-Road, so Jeep is especially proud to win this prestigious award," said Mike Manley, President and CEO – Jeep Brand, Chrysler Group LLC. "Jeep Wrangler Rubicon has long been the most capable vehicle on the planet. With a completely new powertrain for 2012, it has reset the capability benchmark, while simultaneously offering consumers more fuel efficiency, horsepower, and on-road performance in every-day driving."

To be eligible to compete, a vehicle must be all-new or have substantial improvements that make it perform significantly different from the previous model year. Vehicles must also be available for sale before January 15 of the model year, have a production run of at least 2,500 units, and be equipped with a two-speed transfer case. The complete test results and vehicle evaluations for the 2012 4x4 of the Year competition will appear in the February 2012 issue, available December 6, 2011.

Information on the test will also be available on the Petersen's 4-Wheel & Off-Road website, www.4wheeloffroad.com. 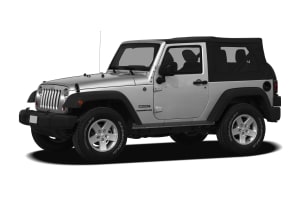