Our 2011 Hyundai Equus Ultimate long-term tester made its way back into my garage for the month of September, and despite cresting the 16,000-mile mark, appears no worse for the wear. Or so I thought.

I hadn't seen the Equus since its odometer showed just a few thousand miles, and in that time it's been the vehicle of choice for many of our Detroit-based team members' summer vacations. It's easy to see why: The Equus is ideal for covering long distances in comfort. That piled on the miles quick, though, and sitting in my driveway in early September, the effects of this hard use became apparent.
For one, the stained leather of the driver's lower seat back continues to get worse. We've inspected the discoloration closely, and tend to agree with those in our Facebook community who suggest it's being caused by either cheap jeans or leather belts. That said, we also think the adjustable lumbar support system that we've complained about in the past is playing a part, too. Aside from causing lower back pain on long and short drives alike, the perpetually overinflated lower lumbar support is rubbing up hard against every fabric it comes in contact with. We've purchased some leather cleaner from a local AutoZone and will report on its effect, but at this point the leather might be permanently damaged from the constant friction.

Fleet manager Steven Ewing also pointed out to me some vertical scratches that had mysteriously appeared on the rear passenger door of the Equus. I likely wouldn't have noticed these surface scrapes had they not been pointed out, but they were all I saw once I was aware of them. This, along with a pair of dangerously worn windshield wipers, gave me an excuse to fire up the Equus iPad app and schedule a concierge service appointment with my local Equus-servicing Hyundai dealership.

That would be Elyria Hyundai right off I-90 in Elyria, Ohio. Setting up the service appointment through the Equus iPad app was a little difficult due to limited menu options (there are no options for such specific service items as "scratches" or "windshield wipers"), but a representative from Elyria Hyundai was quick to call and confirm the appointment. The dealership kept the calls coming on the day in question, ringing me to confirm they were on their way to pick up the car – and leave a Genesis loaner – and when they were finished and on their way back with the car.

I hadn't realized how dirty, grimy and crusted with bugs the Equus was until the dealer returned with a gleaming white luxury sedan. Not only had Elyria Hyundai made those scratches disappear completely (see above), its service department had washed and detailed our Equus to a like-new condition. Overall, the entire concierge service experience was excellent (the Thank You card on the passenger seat is a nice touch) and significantly more convenient than having to drop off and pick up the car ourselves.

The amount of attention the Equus attracts continues to surprise us. People don't know what it is, but they think it's expensive. In addition to lots of looks and a few "Nice car" comments, I had two lengthier encounters with strangers that are worthy of mention. One was with a Hyundai Azera owner who literally stopped me while I was pulling out of the driveway. Our brief discussion while blocking the sidewalk revealed a bit of disappointment on his part. He had decided not to wait for the Equus to go on sale before buying the Azera, and was second-guessing that decision after seeing the South Korean limo in the flesh.

The other encounter happened while filling up the Equus with premium fuel at the corner station. A gentleman pulled in driving a brand new Fiat 500 and stopped me before leaving to comment on how premium the Equus appeared. Clearly an auto enthusiast, the gentleman spent our short time together complimenting Hyundai for its rapidly improving products and industry competitiveness.

I also had some fun with the Equus, using it to record a time-lapse video of a six-hour drive on our new ReplayXD 1080. Check out the results below.

As I write this, the Equus has moved on from my possession and is back in Detroit. I likely won't see it again before we hand it back to Hyundai, so now is the time to impart my final thoughts about this automaker's first foray into the full-size luxury sedan segment. Like most first generation products from Hyundai, the Equus doesn't lead its class in any particular area, particularly ride and handling, which is tuned to the softest side of marshmallow. But the Equus is a promising start for an automaker with the shortest learning curve in the business. I wouldn't choose it outright over the Germans or Lexus LS, but don't expect the same will necessarily be true of a second-generation Equus, if Hyundai decides to build one for the U.S. 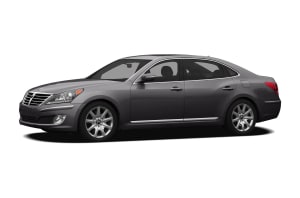