Only one free Dodge Journey left in "You find it, you win it" marketing stunt

Aaron Richardson
Dodge is giving its customers a chance to win a 2012 Journey – one of three, actually – provided they're able to go out and find it. The automaker's new marketing campaign calls the Journey a "Search engine for the real world," and this new take on the traditional car giveaway relies heavily on YouTube for broadcasting clues on the whereabouts of each Journey.

As you might have heard already from some of Dodge's new television commercials, two of the three Journeys have already been found – one outside of San Francisco near Lake Tahoe and the second near Cheyenne, Oklahoma. The third will be parked somewhere in the eastern part of the United States, and Dodge will begin publishing clues to its location this Saturday, June 24.

If you want to participate, you'll need to visit Dodge's YouTube channel at that time ( www.youtube.com/Dodge) and watch the 24/7 live feed of the last Journey just sitting there. Dodge will release clues over the live feed, as well as a number of additional video clues that should get you closer and closer to figuring out the final Journey's location where it's just sitting there parked, waiting for you to find it.

We've included Dodge's the aforementioned commercials after the jump along with the official press release. If you're really going try to find the final Journey, you may want to look over the rules a little more closely.

September 9, 2011 , Auburn Hills, Mich. - A new advertising campaign for the 2012 Dodge Journey that encourages people to get out and explore the world instead of just reading about it, has an added twist: a chance to win one of three Journey vehicles left hidden across America.

Television and digital spots begin Sept. 9, positioning the Dodge Journey as the "Search Engine for the Real World," the perfect vehicle for people looking for adventure, flexibility and affordability. The campaign takes viewers on a tour of some of America's most picturesque landscapes while showcasing the Dodge Journey's unrivaled versatility.

"The Dodge Journey is the 'Swiss Army knife' of vehicles," said Reid Bigland, President and CEO – Dodge Brand, Chrysler Group LLC. "America's most versatile crossover is also now the most affordable in its class, starting at $18,995 MSRP. Part compact car, due to its affordable pricing, part SUV with available all-wheel drive, and part van with available seven-passenger seating, the Journey offers best-in-class versatility, driving range and value, allowing Journey drivers to explore all that America has to offer."

The initial 30-second TV spot, "Search Engine," shows a montage of three Dodge Journeys on various adventures across America – kayakers headed out for a trip, a group of friends on a road trip and a family ready to camp. The spot ends with the viewer being told the vehicle they've just seen headed somewhere beautiful is in fact still sitting in that final real world location waiting to be discovered. The first person to find the Dodge Journey, wins it.

In all, three vehicles are positioned in the continental United States waiting to be found, one each in the West, Midwest and East.

The campaign extends to www.YouTube.com/Dodge as consumers unlock clues from additional videos and watch a 24/7 live camera feed of the hidden Dodge Journey vehicles. The live feed will reveal additional clues and provide consumers a chance to watch along as a lucky person discovers each of the three Dodge Journeys. 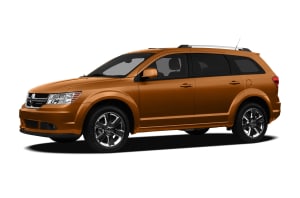