Mecum is set to auction off the very last Mitsubishi Eclipse ever produced at its Normal, Illinois plant.

The 2012 Eclipse Coupe packs the company's 3.8-liter V6 engine and is equipped with the SE package – the only car in the model's history to receive that combination. The Eclipse marks the end of 22 years of continuous production with Kalapana Black paint, 18-inch wheels and SE side graphics. The interior, meanwhile, is laden with leather seats, a 650-watt Rockford Fostgate sound system, rearview camera and HID headlights.

The very first Eclipse rolled off of the line in 1989, and 980,000 vehicles have carried the nameplate since then. That figure makes the Mitsubishi the best-selling Japanese sportscar of the past 20 years, according to Mecum.

The last Eclipse will be featured in the annual St. Charles Auction at the Pheasant Run Resort in St. Charles, Illinois. The auction is set to kick off on September 17 at 1:55 pm with no reserve, and Mitsubishi has promised to donate the proceeds of the sale to Japan's Red Cross.The event is open to the general public with a $15 entry fee. Hit the jump for the full press release.
Show full PR text
MECUM TO OFFER LAST PRODUCTION 2012 MITSUBISHI ECLIPSE DURING ST. CHARLES AUCTION

MARENGO, Ill. - Mecum Auctions will sell a special 2012 Mitsubishi Eclipse Coupe SE 3.8L - after 22 years, the very last production Eclipse to ever come off the assembly line and the only V-6 to receive the SE package - during their annual St. Charles Auction, Sept. 15-18, 2011, at Pheasant Run Resort in St. Charles, Ill.

The special-edition Eclipse was custom built by Mitsubishi Motors North America, Inc. to commemorate the end of Eclipse production and to be auctioned at no reserve with all proceeds to be donated to the Japan Red Cross earthquake relief. This rare, one-of-one vehicle features a Kalapana Black paint scheme that was selected by the Mitsubishi Facebook community, 18-inch Dark Argent wheels, SE lower side graphics, sunroof, leather interior, 650w Rockford Fosgate 9-speaker audio system with SiriusXM, hands-free Bluetooth phone interface, rearview camera and HID headlights.

Mitsubishi began producing the iconic Eclipse in 1989, selling four generations of the model over the last 22 years. Total sales since production started is 980,000 cars, making the Eclipse the best-selling Japanese brand sports car of the last 20 years.

"Our goal with this Mitsubishi Eclipse SE was to create a very special car that would best honor the closing of this vehicle families' chapter, built at our Normal, Illinois facility," said Greg Adams, VP Marketing & Product Planning at Mitsubishi Motors North America. "We believe this one-off 2012 Mitsubishi Eclipse SE will become a highly collectible automobile, and we are excited to work with Mecum Auctions to offer it to collectors at their high-energy events."

The St. Charles Auction is open to the general public with tickets available at the door for just $15 per day. For more information or to become a registered bidder for this auction, visit www.Mecum.com or call 815.568.8888. 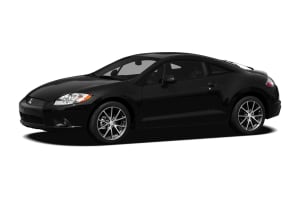