Our enthusiast's Spidey Sense started tingling when we heard about the newest bit of technology employed on the enhanced 2012 Toyota Yaris. It was not a more advanced variable valve timing system; the Yaris' 1.5-liter engine is carried over and already has an intake cam with adjustable phasing. It was not more cogs gracing a more advanced transmission; the Yaris makes do with a four-speed automatic and a five-speed manual. The suspension is also traditional with struts up front and torsion beam in the rear.

So what was the next great thing?

A mono-arm windshield wiper with washer jets aimed to either side of the big blade. Ah, our Spidie Sense was trying to warn us of an exceptionally dull car. In this world where small, inexpensive cars are becoming more fun – Mazda2 and Fiat 500 anyone – the new Yaris is a yawner.

For normal consumers, however, the 2012 Yaris – available as the L, LE and SE – is a much improved, affordable and economical transportation appliance. It's the kind of car you'd feel comfortable recommending to a friend's sister or anyone who thinks of cars as nothing more than subway substitutes.

With this buyer in mind, the $14,115 Yaris is spot on. (See the complete story on pricing here.) Compared to the 2011 Yaris, the 2012 model is a heavy refresh that includes a wheelbase stretch, new exterior sheetmetal and a totally new interior.

The extra length is what required the exterior redesign. This gave Toyota designers the opportunity to toughen up the Yaris's styling. More sculpted fenders help give the subcompact a bolder stance, as does the heavily angled rearmost pillar (C on the three-door, D on the five). The Yaris still won't attract longing glances from Ferrari enthusiasts, but at least it's not a totally milquetoast design like the outgoing three-door and five-door editions.

Available only as a hatchback, the Yaris is now large enough to be considered a trunkless alternative to the Corolla (available only with a traditional boot). Riding on a 98.8-inch wheelbase that's 2.9-inches longer than 2011, nearly all of the stretch was added to make the trunk more useful. Cargo volume now stands at 15.3 cubic feet for the three-door and 15.5 cu-ft for the five-door. These numbers conveniently expand by folding the split rear seatbacks, adding useful versatility.

Room for passengers felt generous enough for four. Filling all five seatbelts causes hip-to-hip seating across the rear bench for all but the skinniest passengers. Regarding rear legroom, someone five-foot, ten-inch easily fits behind themselves. As the height of front-seat occupants crests six feet, rear legroom drops to child-like proportions. Such is the physical reality of sub-100-inch wheelbase vehicles.

Those who shopped the previous generation Yaris could have been easily put off by that car's central-mounted gauge cluster, but it helped facilitate cost-effective production for right- and left-hand-drive markets. That ergonomically horrific paradigm has been mercifully replaced with a conventional instrument cluster and dash configuration. Drivers now find an easy-to-read gauge cluster where it should be, directly behind the steering wheel.

The instrument binnacle blends into a horizontally stretched dash that breaks away from the trendy design convention of vertically stacking all controls and vents at the dash's center point. The latter motif tends to compartmentalize the front seats, while the former seems to visually expand the interior's spaciousness.

A double-DIN-sized radio rides high on the dash in easy reach of the driver and front passenger. Unique to the North American market, these radios – there are two – have knobs! Big ones! These ingeniously useful Human Machine Interface devices work so much better than the tiny, fitful and frustrating volume and tuning buttons found on so many of today's automotive audio systems.

The base Yaris L's radio is a step above conventional low-end units because it includes wired iPod connectivity plus Aux and USB inputs. The uplevel LE and SE's unit includes Bluetooth connectivity for phones and music streaming. Highlighting the North American roots of the radio, telephone operation buttons are on the radio, not on the steering wheel (where they'd likely be if this system were offered in all markets).

For those with a penchant for getting lost, there's no optional navigation system from the factory. Paper maps fit easily in the glovebox for those without smart phones and robust data packages. Meanwhile, the climate control system uses a trio of knob-like dials that keeps heating and cooling tasks blissfully simple and straightforward.

This straightforward attitude carries through to the Yaris' powertrain. North America gets the 106-horsepower (at 6,000 rpm) 1.5-liter four-cylinder. Torque is a modest 103 pound-feet at a moderately high 4,200 rpm. The engine can be considered so 2006 with its traditional port fuel injection (as opposed to direct injection) and variable valve timing on just the intake cam (as opposed to both intake and exhaust).

The transmissions are just as 2006, or perhaps even 2000. The automatic has just four gears and the manual is a five-speed. Toyota explained the reasons for its choices as cost and performance. Adding technology adds cost to a car they want to keep affordable. The incremental performance, Toyota believes, wouldn't be worth the bump in MSRP. EPA figures are currently 30 miles per gallon in the city, 38 mpg on the highway and 33 mpg combined for the five-speed manual, and 30/35/32 mpg for the automatic.

More fuel-efficient versions of the Yaris are sold in other markets, but Toyota's U.S. operation felt that the lack of torque from its smaller 1.3-liter four-cylinder (available with a CVT and 6-speed manual elsewhere) wouldn't have played well here, despite its potential to be another member of the 40-mpg club.

Given how leisurely the 1.5-liter accelerates, Toyota's gut was probably right. We didn't put a clock to any of the Yaris models we drove because of the crowded driving environs of Los Angeles where we were offered our initial wheel time. If asked to guess about 0-60 mph, longer than ten seconds wouldn't surprise us. Weighing around 2,300 pounds, the little Toyota isn't quick. It's not frightfully slow either, as it possesses enough oomph to keep up with traffic if peddled vigorously.

Sometimes cars are slow but dynamically interesting and or intrinsically engaging. The Yaris isn't.

Given its target buyer, the lack of driving character shouldn't be considered worthy of countless demerits. Toyota isn't Mazda. The expectations are different and in keeping with Toyota's brand character.

We spent most of our drive time behind the wheel of a $15,625 Yaris LE, the mid-line model that's expected to be the most popular. Base L equipment levels fit basic needs for safety and comfort: seven airbags, electronic stability control, air conditioning, power door locks, rear-window defroster and P175/65HR15 tires. The LE adds features such as a height adjuster for the driver's seat, 60/40 split-folding rear seat backs, steering wheel audio controls, remote keyless entry and tasteful two-tone interior accents.

To the Yaris' credit, LE's handling and steering feel are predictable and relatively direct. Communicative they're not. Understeer is modest and it actually takes some work to make the front tires beg for mercy.

The engine willingly revs to its redline, but there isn't much point. Spinning the mill creates an unwelcome and uninspiring soundtrack. Thankfully, the engine at least remains smooth even at higher rpms. Regardless of speed, the motor doesn't feel cheap or fragile.

Both gearboxes do their respective jobs as they should. The manual offers pleasant throws and positive engagement; we've rowed many shifters with worse action. The automatic operates with a predictable shift schedule that often relies on the engine's modest torque rather than a quick downshift (this helps prevent gear hunting Toyota says). The result is generally a smooth drive, but when the downshift does happen, it creates an immediate sense of urgency with its sudden jump in engine revs, noise and forward push. Such are the characteristics of a car intended to serve the transportation needs of those who value Bluetooth connectivity over maximum lateral acceleration.

We also took a spin in the $16,400 SE, the be-spoiled aluminum-wheeled Yaris. The electric power steering has a faster ratio and spins lock-to-lock in just 2.3 turns (compared to the L and LE's three turns), the suspension is approximately 20-percent stiffer and the tires are larger (P195/50VR16). The car's ride is markedly more firm, but it's not as if the lesser models weren't responsive. Given the SE's lack of additional power, we're not sure why somebody would choose the SE and lose the better everyday ride.

"Yaris. It's a Car," is the line being used by Toyota in promotions for this car. The audience values new phones and tablets over this form of conveyance, so they need to be told what the Yaris is like defining a smart phone to an octogenarian: "Droid. It's a phone." The line encapsulates the inherent dullness of this subcompact. Simultaneously, it pitch-perfectly positions the Yaris for its intended prospects.

Sadly, many who hold licenses no longer view "the drive" as one of life's everyday adventures. A car is simply a substitute for a subway ride – or a shuttle from a parent – and an interminable duration when they lose the ability to text. The 2012 Toyota Yaris won't change this. 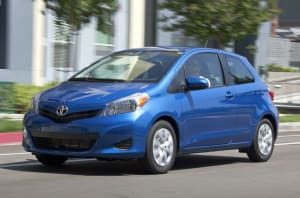