The 2012 BMW M5 has finally landed on U.S. shores and BMW has trotted out its oldest sibling – the same E28 we drove last year – at California's Laguna Seca raceway to mark the occasion.

After its debut at the Nürburgring early this year, BMW boxed up its latest M machine for the festivities here in Monterey and will be shuffling it around to various events throughout the week.

Our first in-the-flesh impressions are beyond favorable, with an exterior that's far less gauche than its predecessor, finally putting the "executive" back in "executive sports sedan." Inside, the professional demeanor carries over, with less flash and a more driver-focused interior.

As if you need a reminder, the M5 now packs a modified version of the same twin-turbocharged 4.4-liter V8 fitted to the X5 M and X6 M, putting out 560 horsepower and 500 pound-feet of torque – the latter of which is available from 1,500 to over 5,750 rpm. Redline is a decidedly un-M-like 7,250 rpm, but the blast to 60 mph happens in claimed 4.2 seconds when fitted with the seven-speed dual-clutch gearbox.

And what about a manual option? BMW officials delivered the standard "we're looking into it" line, but we suspect they're already testing a six-speed 'box that could be an option after the M5 goes on sale in the U.S. this February. Check out our high-res gallery above and let us know what you think in Comments. 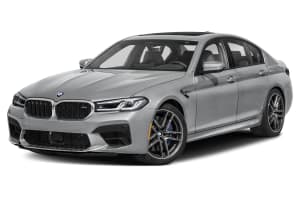