1 millionth Hyundai Sonata rolls off the line in Alabama

To understand just how far Hyundai has come in the past few years, look no further than the Sonata. The smartly styled sedan has earned attention and praise with fantastic efficiency and reliability, but we shouldn't forget that the last generation Sonata was a big step forward as well.

More important than critical success, Sonata has been winning over buyers as well. In fact, one million units of Hyundai's top-selling sedan have now been produced at its Alabama manufacturing facility. Hyundai Motor Manufacturing Alabama plant celebrated the milestone with a small ceremony last Friday, a 2012 limited edition Sonata turbo with a radiant silver paint finish taking the millionth car honors.

The popularity of the Sonata has only increased with the latest redesign, helping Hyundai exceed the 300,000 unit capacity at the Alabama plant for the past two years. Hyundai has been building the Sonata in the South since 2005. Hit the jump to read over the official press release. ONE MILLIONTH SONATA ROLLS OFF HYUNDAI MOTOR MANUFACTURING ALABAMA ASSEMBLY LINE

"I am so proud of everything our Team Members have accomplished in the past six years, eclipsing 1,000,000 total vehicles manufactured in November 2009, producing more than 300,000 vehicles in 2010 and now our 1,000,000th Sonata," said President Lim. "This milestone provides us an opportunity celebrate our many achievements and take pride in knowing our Hyundai spirit is alive and ready to reach any goal we set for ourselves."

HMMA has benefitted from the enormous popularity of the Sonata in the U.S. marketplace. Its perennial role as Hyundai's top seller has contributed to the plant operating beyond its original capacity of 300,000 units for nearly two years.

The plant has produced three different vehicles since 2006, the Sonata, Santa Fe and Elantra. Mass production of the Sonata began at the site on April 5, 2005. The plant built the Santa Fe from

More than 2,500 Team Members are employed at the plant. Since production began in 2005, Hyundai Motor Manufacturing Alabama has built more than 1.4 million vehicles.

Hyundai Motor Manufacturing Alabama, headquartered in Montgomery, Ala., is an independent manufacturing operation of Hyundai Motor Company, based in Seoul, Korea. HMMA currently produces the 2012 Sonata and Elantra sedans. Hyundai vehicles are distributed throughout the United States by Hyundai Motor America and are sold and serviced through more than 800 dealerships nationwide. 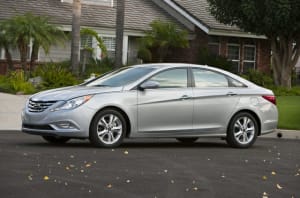