We're big fans of Porsche's Boxster and Cayman, and it appears we're not alone. Porsche is celebrating 300,000 Cayman and Boxster models sold, almost exactly 15 years after the first roadster left the Stuttgart-Zuffenhausen plant in Germany. The lion's share of those sports cars have been convertibles – the hard-hatted Cayman didn't join the party until 2005 as a 2006 model.

To put an exclamation point on production vehicle number 300,000, Porsche went all-out by building a Boxster Spyder with Platinum Silver paint and Carrera red leather interior. The undoubtedly hot ride will go to a lucky customer in Germany.

With a classy design and peerless handling, we're not at all surprised that Porsche has sold 300,000 copies of its mid-engined Boxster and Cayman. Hit the jump to read over Porsche's press release.
Show full PR text
ATLANTA – June 22, 2011 – A nice round number to celebrate the birthday: Almost 15 years to the month after production began, the Porsche Boxster, together with its sister model, the Cayman, exceeded the 300,000 mark for the number of vehicles built. With its timeless attractiveness, this two-seat, mid-engine Porsche design has what it takes to make yet another sports car icon. To mark the anniversary, a Boxster Spyder with Platinum Silver metallic finish and Carrera red natural leather interior trim will roll off the Stuttgart-Zuffenhausen production line in June, destined for a customer in Germany.

There are solid reasons for this long-standing success: The Boxster and Cayman are continuously developed based on a meticulous mid-engine concept and are therefore deemed to set the standard for sports cars of their class. In the important export market of the United States, this is the tenth year that they have been ranked among the "10 Best" vehicles by Car and Driver Magazine and occupy second and third place in Germany as the vehicles that hold their value the best, hot on the heels of the 911.

The Boxster's origins testify to the typical Porsche blend of capability, courage and farsightedness. In the economically challenging times of the early 1990's, the company decided to go onto the offensive and unveiled the classic mid-engine roadster concept at the 1993 Detroit Motor Show. In its design language, the show car was reminiscent of the 356 No. 1 and the 550 Spyder. The overwhelming public response clinched the decision to proceed to series production of the Boxster, which began in the summer of 1996, and introduced as a 1997 model.

Dynamic lines, outstanding performance and an attractive price quickly catapulted the mid-engine sports car onto the bestseller list while attracting new customers to Porsche. To put the successful concept on a broader stage, Porsche also developed a Coupe based on the open-topped, two-seater roadster that made its world debut at the 2005 IAA Frankfurt Motor Show as the Cayman. The enormous demand resulted in the Boxster and Cayman being built at Valmet Automotive in Finland in addition to Zuffenhausen.

The model range currently comprises the four open-topped variants, the Boxster, Boxster S, Boxster S Black Edition and Boxster Spyder. These are complemented by the Cayman, Cayman S, Cayman S Black Edition and Cayman R Coupes.
The engine variants for the two model lines range between 255 hp and 330 hp thanks to Porsche Intelligent Performance fuel consumption is rated as high as 29 MPG highway. 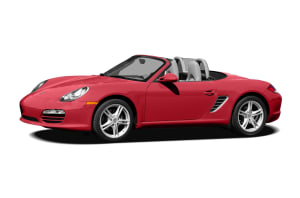