Steven J. Ewing
2012 Corvette Z06 on the 'Ring – Click above to watch the video after the jump

The Corvette ZR1 may be the bees' knees, but there's certainly a lot to be said about the mid-range Z06. For 2012, the Z06 gets a host of updates, and in order to prove the car's performance prowess, Corvette engineer Jim Mero took a brand new Z06 fitted with the Z07 chassis package to Germany's Nürburgring, only to find out that it's capable of ripping off a 7:22.68 lap time.

For those keeping track, that's 20 seconds faster than the last Z06 record lap (set in 2005), and only three seconds slower than the fastest ZR1 time. Color us impressed.

Do yourself a favor and click through the jump to watch Mero flogging the Z06 around the 'Ring. General Motors' official press blast is yours for the reading after the jump, as well.

DETROIT – Corvette engineers provided another exclusive peek inside the extensive testing that is instrumental in creating one of the world's highest performing cars. During Corvette's recent return to the world's most-demanding testing ground – Germany's famed Nurburgring -- the Z06 model, as detailed on videorecorded a lap time of 7:22.68.

While lap times at the Nurburgring's Nordschliefe ("north loop") are unofficial, these times are a frequent, if informal, benchmark for some of the world's highest performing cars. The recent Corvette Z06 performance there is notable in that few, if any, production models in the sub-$100,000 range have recorded such a strong lap time.

"There's a lot of legend and speculation about Nurburgring lap times, so we wanted to provide sports car fans with a video look inside one complete lap in the new Z06," said Tadge Juechter, Corvette vehicle line director and chief engineer. "This is just one of a multitude of ways we test, but there's nothing like the Nurburgring in terms of severity, speed and notoriety around the world. In this particular test in Germany, we were validating new content for 2012, doing many days' worth of tuning and development work. As a small part of that effort, we had a brief opportunity for Jim Mero to record lap times with a clear track. We ran three of those complete and continuous laps, two in the ZR1 and one in the Z06, captured by on-board videos."

Measuring 12.9 miles (20.8 km) and including some 154 turns, the Nurburgring's Nordschleife is widely considered the world's most-demanding course. The test car was driven by Corvette engineer Jim Mero and was a full production model with no performance modifications. 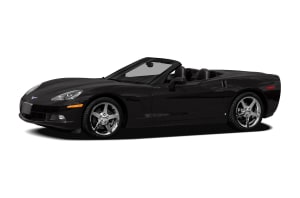