The Pontiac Solstice is the crown prince of the General's lineup. With curves and flares, bulges and rakes, it's the modern equivalent of the Coke bottle aesthetic of yesteryear. Sure, some may prefer its sheetmetal sibling the Sky, but regardless of your chosen chariot, they're both head-turners. When the Solstice was introduced last year, however, it lacked the firepower to back up its sex-on-wheels image. Until now.

With close to 3,000 pounds of metal to move, the 2.4-liter Ecotec four found in the base Solstice left much to be desired, so Pontiac replaced the 177 HP mill with a direct-injected, turbocharged 2.0-liter I-4 producing 260 HP and an equal amount of torque. Peak horsepower is achieved at 5,300 RPM, while the torque curve is as flat as Bonneville from about 2,500 to 5,000 RPM. However, our seat-of-the-pants dyno suggests that those torque figures are underrated by at least ten-percent – nothing new when it comes to the General's forced-induction offerings.

On the outside, there's little to indicate that this particular Solstice is anything above and beyond its base brethren. As a matter of fact, excluding the 18-inch chrome rolling stock, it's downright subdued. The naturally aspirated version's brushed metal grilles have been replaced with blacked out inserts, while the fog lamp recesses have been reshaped, broadened and painted to match. With the exception of a discreet GXP badge on the boot and a second exhaust tip, only the most hardened pistonheads will see the intercooler peering from behind the grille. Our only styling concern is for those who reside in a state that requires a front license plate, effectively turning the Solstice into a Bugs Bunny look-alike in drag.

Search out pictures of the Solstice online, and you'll be hard pressed to find a shot with the top up. There's a reason for that. Our initial impression that the design lacked the refinement of other open-top offerings never really subsided, but the steep upward angle of the window line, beginning with the A-pillar and extending up towards the rear of the canvas roof, provided a subtle reminder of the chopped-top hot-rods of yore.

Open the driver's side door and you're instantly reminded that this is truly an American interpretation of the roadster. It's heavy, and when it closes, the resounding "thud" is affirmation that the Solstice is no featherweight.

Much has been made about the General's interior design renaissance, but the Solstice is decidedly behind the curve. The extra large dimensions of the exterior – particularly the elongated hood and bulbous badonkadonk – find their way inside and manifest themselves in a dashboard that consumes more real estate than the Donald.

Most of the materials that make up the interior are of a mildly higher grade than we've seen in the past, save the top of the door panels and the area aft of the center console, which seems to have stolen bits of our Project Big Wheel to make the bean counters happy.

The wrap-around instrument panel, a lighter shade of higher-quality gray plastic than the rest of the interior, provides a nice contrast that gives the Solstice a driver-oriented feel. The stereo, HVAC controls and the redundant steering wheel mounted buttons are all rather straight forward, although the "mute" symbol on the right side of the wheel is almost an exact duplicate of the icon used in Honda's products for its voice-command controls – a temporary moment of confusion ensued.

The Preferred Package has replaced the Performance Package for 2007, which makes sense considering that all the accoutrements – power windows, door locks and keyless entry – had little to do with performance in the first place. One glaring omission is the utter lack of places to put any personal belongings. With the exception of the glove box and a mesh map holder underneath the passenger's legs, we were hard-pressed to find a secure location for our phone or iPod – the latter being overly problematic considering the stereo has an auxiliary input for just such a device.

The leather seats, complete with red stitching that matches the shifter boot and steering wheel, are clearly geared towards Grade-A American butts. As such, any kind of lateral support was eschewed by having to grip the wheel to keep our body from sliding side-to-side. Not what we'd expect from a performance-oriented offering, but admittedly, we're skinny.

Press the trunk release button on the key fob, and those two awkward triangular slats of canvas pop up with purpose. From there, you can easily pull the trunk lid up and instantly see why the Solstice will forever be relegated to Sunday-drive duty. The large gas tank protruding from the floor takes up the majority of usable space, requiring any parcels that wish to be stowed in the back be soft, small and devoid of anything breakable. If there's any aspect of the Solstice that reveals it was rushed to production, this is it.

The process for putting the roof down is a bit convoluted, especially compared to some of the other convertibles offered in this segment. The procedure goes something like this: pop the trunk, get out of the car, open the rear clamshell, get back in the car and wrestle with the center-mounted lever that unlatches the roof from the windshield pillar. Get out of the car again, pull up on the roof and guide it into the now entirely useless cavity in the rear. After one or two (or three or four) hard pushes to make sure the roof is completely stored, you can close the clamshell – except it doesn't click in securely. Pull the key fob out again, pop the trunk, re-raise it, and shove down the roof an extra 2mm, then try again. Thankfully, putting the roof back into place was less of a chore; again, with the small exception of making sure the trunk closes completely. We found that re-latching the triangular extensions of the roof could be a bit annoying, but we were able to get over it in quick order.

Aesthetic and design foibles aside, it was time to see if the GXP's power and poise make it into a competent corner carver or a pretentious poseur.

Shifting into reverse and letting up on the pedal to the left revealed a clutch with plenty of travel and a tough-to-define friction point. Once into first, some mild application of the throttle was met with a disturbing amount of driveline shutter. Poking around in first gear was an exercise in neck restraint, but once underway clutch slippage was rarely encountered.

Around town, the steering rack and five-speed manual provided a perfect environment for schlepping to and fro. With the top down, visibility was top notch, although the amount of wind entering the cabin at any speed above 35 MPH was enough to mess even the most product-enhanced hair. Because of this lack of wind suppression, there were several times that we wanted to put the top down, but didn't feel like battling the elements outside (let alone the aforementioned procedure). However, even with the roof in place, visibility wasn't nearly as bad as expected. Unlike other soft-top offerings, lane changes in the Solstice were never sphincter-clutching maneuvers.

It took a day or two to get used to the Solstice's larger dimensions, but after that, we were ready to sample the dynamic thrills anticipated from the addition of the Bilstein dampers, 245mm performance rubber and LSD, all standard on the GXP.

After some time spent at our local performance shop poking around the Solstice to see what, if any, mods could be performed to free up some ponies and drop the curb weight (look for a report on that later), we headed south towards one of our favorite bombable back roads.

While on a deserted stretch of straight tarmac, we switched the LCD underneath the tach to display the boost level when our right foot hit the floor. Judicious application of the throttle in third gear creates a swell of abnormally aspirated thrust, coupled with a burbling soundtrack that doesn't quite match the GXP's speed. Boost levels at full throttle normally reach 18 PSI, but for the most part, you'll find yourself somewhere in the 8 to 16 PSI realm.

Turbo lag? Look elsewhere. With the reduction of displacement in the GXP, not only does power come on instantly, but the revs shoot up and almost outrun the tach. The sub-six second sprint to 60 is easily repeatable, especially with the traction control set to "Sport," allowing just the right amount of wheel spin to get a clean launch from 4,500 RPM.

By the time we had reached the first set of bends, our initial impression of the Solstice was confirmed – it feels like every body panel has been injected with lead, with all the dynamic sensibilities that implies. While traveling around at a mildly quick clip, the GXP is a brilliant machine; push harder though, and things begin to fall apart.

Where before, the steering was quick and intuitive, at anything beyond 7/10ths, you feel as if you're reacting to the corner rather than taming it. Body roll, where before none existed, now becomes disturbingly apparent and extremely disconcerting. Any tight bends taken at speed are met with copious quantities of understeer, making left foot braking a necessity to avoid dropping off onto the shoulder, or worse – crossing the double yellow. And while a heavy right foot can cause the rear to break free, rather than controllable oversteer, you're faced with more buzzkillling push.

We understand that the Solstice was originally designed to be the ultimate drop-top head turner, and in almost every sense, GM's designers have outdone themselves. From a dynamic standpoint, comparisons to the MX-5s of the world are inevitable, but that kind of pigeonholing does the Solstice a disservice. The GXP isn't a Miata-fighter or a Z4-competitor; it's a Corvette at two-thirds scale. And if you're enamored with the styling, sold on a convertible and disinclined to push the envelope, the Solstice is for you, and the GXP is the only one to have. 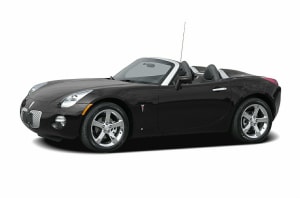