Greatest Buick cars of all time

Dipping its toes back in the performance waters

Buick is rightly proud of its long and storied history of innovation. Not only is Buick America's oldest active automaker, it is the first to have produced a production engine with overhead valves, first to introduce turn signals, and was the winner of the first race at the Indianapolis Motor Speedway.

In more recent years, though, Buick slowly drifted from innovation and excitement to mediocrity, with inoffensive styling and marketing that appealed to an aging fanbase. With the introduction of the 2018 Regal GS, we're happy to report that Buick is appears on track to complete a turnaround that was sparked in 2012 by a vehicle you'll see on this list of the greatest Buicks of all time.

Without further ado, click on the image above to get started.

Let's be clear about this point: There were several truly great Buick models built before the 1961 Special. We don't want to discount any of its previous successes, but the all-aluminum 215-cubic-inch V8 engine that debuted in the Special stands out as a milestone that transcends Buick's history and continues to influence the automotive world today.

The Buick 215's all-aluminum construction allowed it to be the lightest mass-produced V8 engine of its time. At launch, it made 150 horsepower and 220 pound-feet of torque, but that rose to as much as 200 hp and 240 lb-ft with the right options and tuning. But that just scratched the surface of the engine's potential.

A stock-block Buick 215 V8 qualified for the Indy 500 in 1962 with Dan Gurney behind the wheel, and in 1966, the 215 became the basis of the F1-winning Repco V8 used by the Brabham team. Buick sold the rights to the engine to the British Rover Company, where it went through many permutations before being phased out as a 4.6-liter engine in the 2004 Land Rover Discovery.

That's quite a history, but it all got started in 1961. Sure, the two-door Skylark is the most collectible of these models, but we're suckers for the station wagon.

Sadly, the notion of a large, luxurious but still sporty two-door coupe is all but dead. Four doors are more practical, sure, but only because the big coupe is the ultimate expression of personal fulfillment. You like the feeling of a big luxury car, you don't care if it works for anyone but yourself, and you can afford it. For you, Buick offers the Riviera.

Combine classic muscular looks with a torque-tastic 425 cubic-inch V8 engine and you've got a surefire collectible. 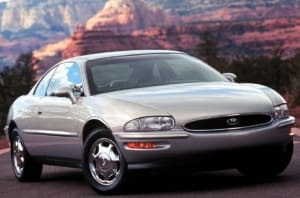 The '60s may have been swingin' but 1970 was the pinnacle of the original muscle car era. Everyone remembers the Pontiac GTO – particularly the Judge in its flashy orange paint scheme – but the Buick GSX was more potent. Power came from ram-air-inducted 455 cubic-inch V8 engine. Horsepower was rated at 360, but was nudge nudge wink wink well over 400. Torque? How about 510 pound-feet at just 2,800 rpm.

The GSX came in either white or yellow, either with standard black hood and side stripes. There's a tachometer mounted to the hood, right in the driver's line of sight, so you'll know just when to shift the Hurst-equipped four-speed manual transmission into the next gear for ultimate tire-roasting acceleration. It's muscle car nirvana.

The 1971 Buick Riviera was divisive when it first hit the scene. The well-known spear-shaped bodyside was taken to the extreme, the body was pulled 217 inches front to rear – considerably longer than Buick's stylists had originally envisioned – and there's an aggressive frontward lean about the bodywork. Oh, and there's that so-called boattail rear glass shape, inspired by the split-window '63 Corvette.

The big Riv has aged well. Looking back on car design in the early 1970s, Buick's personal luxury coupe stands out, in a good way. Buick wasn't afraid to take some chances way back when, and we'd love to see a little more risk-taking in today's automotive world, too.

This is the one Buick that hardly needs any introduction to automotive enthusiasts. But if you're unaware, here's a brief history lesson: The Grand National first appeared in 1982 after Buick's second consecutive NASCAR Winston Cup Series manufacturer’s title. It initially had a naturally aspirated engine as standard, but by 1984 the GN and Regal T Type upon which it was based got a turbocharged 3.8-liter V6 as standard equipment.

And then, in the rear-drive Regal's final year of production, Buick pulled out all the stops. The Grand National Experimental, or GNX for short, this baddest of all Buicks had modifications to the engine, transmission, and suspension all intended to make it quicker than anything else available for the road in '87 – including anything from Ferrari and Porsche. It was factory rated at 276 horsepower and 360 pound-feet of torque, but contemporary dyno runs showed it actually sent 300 ponies and 420 lb-ft to the rear wheels. Motor Trend pushed one down the quarter-mile in 12.7 seconds at 113.1 miles per hour.

Buick went through an unfortunate period in the late 1980s through the first decade of the 2000s in which performance was a dirty word. Sure, there were supercharged 3800 V6 engines that provided excellent acceleration in a straight line, but they were all shared across the GM lineup. There was nothing to distinguish Buick as special.

That changed in 2012. A new Opel-based Regal had hit the year prior, and Buick decided the GS – shorthand for Gran Sport – was in need of resuscitation. A 2.0-liter turbocharged engine put down 270 horsepower and an impressive 295 pound-feet of torque. Those ponies were sent to the front wheels through an available six-speed manual transmission. The chassis was tuned with high-tech shocks, the brakes were from Brembo, and the wheels were 20-inches and forged. All in all, an excellent performance package.