'My Next Guest Needs No Introduction' with Hamilton airs May 31

Tony Markovich
After David Letterman took Lewis Hamilton out for a hot lap in an AMG wagon, Hamilton jumped out of the car, grabbed his chest, and said, "I'm alive! Thank you, Jesus!" When Hamilton got behind the wheel and punched the gas, Letterman did a fist pump and yelled, "YE-HESS." Letterman is all of us.

Netflix released the teaser clip from Letterman's show "My Next Guest Needs No Introduction," which is now entering its second season. Because it airs on Netflix, all five episodes from season two will be released May 31, 2019. Hamilton joins a prestigious list of guests, including Kanye West, Ellen DeGeneres, Tiffany Haddish and Melinda Gates.

In the short preview, we see Hamilton and Letterman in a Mercedes-AMG E 63 wagon doing laps at Silverstone Circuit in England. Letterman is no stranger to wagons, as he'd previously driven an E 63 for a week, and he also owned a Paul Newman-built 1995 Volvo 960 wagon with a 380-horsepower supercharged Ford V8. That car was previously seen on Jerry Seinfeld's show " Comedians in Cars Getting Coffee."

The clip doesn't give any further hints as to what the two will be discussing, but Letterman is a legendary interviewer, and we're sure there will be some great nuggets to come from it. Check out the entire series on Netflix. 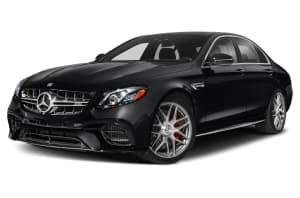