After two generations and 12 years of wearing the same hard-edged blocky aesthetic that helped establish Mercedes-Benz in the seven-seater segment, the GLS debuted at the 2019 New York Auto Show with a softer, curvier, and more elegant presence. The all-new generation is bigger, more powerful, more advanced, and more premium; and it wears Mercedes' Sensual Purity design language with maturity. The top-of-the-line 580 4MATIC presents a new engine to the world for the first time, the 4.0-liter biturbo V8 with EQ Boost.

At launch, the Tuscaloosa, Alabama-built GLS will be available in two variants: the 450 4MATIC and the 580 4MATIC. The 450 is powered by a turbocharged 3.0-liter inline-six that makes a claimed 362 horsepower at 5,500 rpm and 369 lb-ft of torque at 1,600 rpm. According to Mercedes, its EQ Boost technology is capable of additionally providing up to 21 horsepower and 184 lb-ft of torque for short bursts of time.

EQ Boost is an integrated starter generator and a 48-volt onboard electrical system. The electric motor helps aid the combustion engine with acceleration, and the generator recuperates energy that can be supplied back into a battery. Furthermore, the EQ Boost eliminates the need for a belt drive, which saves space and makes the engine more compact. The electric system can also service features such as the air conditioning compressor and the water pump.

The second and more important engine is a 4.0-liter biturbo V8 with the same EQ Boost technology. It makes a claimed 483 horsepower and 516 lb-ft of torque before boost. Both the six- and eight-cylinder engines are paired with 9G-TRONIC nine-speed automatic transmissions and put power down to all four wheels. Mercedes claims the 450 can go zero-to-60 in 5.9 seconds, while the 580 can scoot from zero-to-60 in a claimed 5.2 seconds. Both are electronically limited to 130-mph top speeds.

Ensuring a comfortable ride, all GLS models come standard with air suspension and active damping. Mercedes notes that all components of the AIRMATIC system have been revised and improved specifically for the GLS. New for 2020 is the optional E-Active Body Control system, which can determine spring and damping forces at an individual level. E-Active works with the air suspension to eliminate squatting, diving, or other body roll. During turns, the GLS will even lean in to keep the cabin level in attempts to completely eliminate disturbances from reaching the passengers. 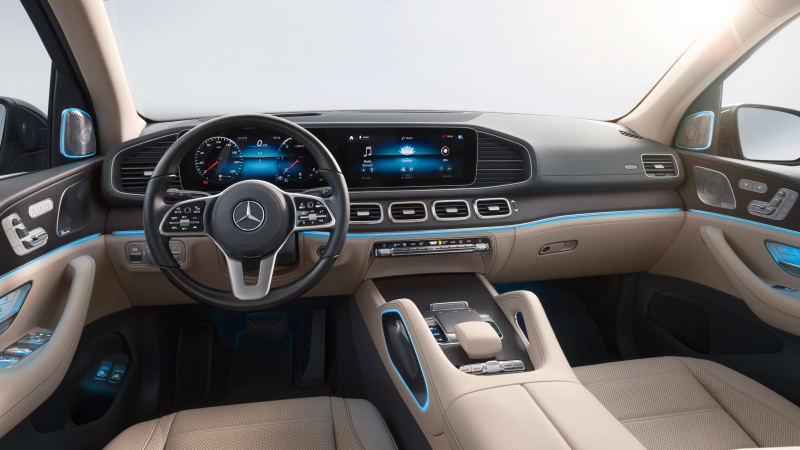 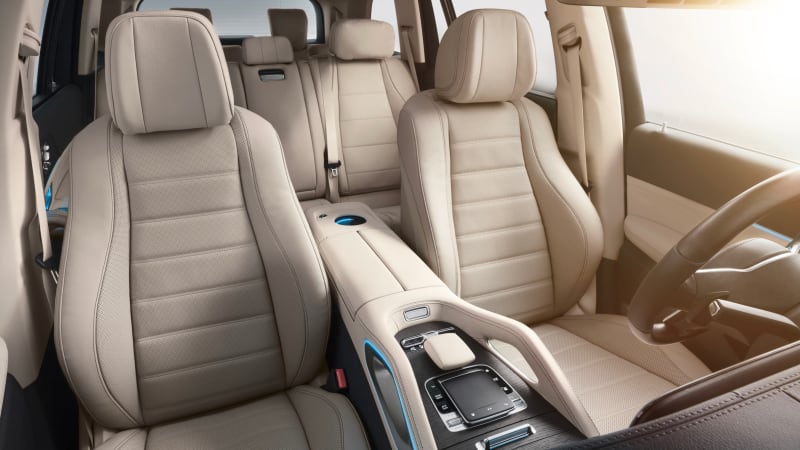 The larger size means more space inside. The GLS can be ordered in two orientations, traditional seven-seater or a new six-seater with captain's chairs for the same cost. Mercedes-Benz says legroom in the second row increases a massive 3.4 inches when the seats are fully pushed back. The third row, which is heated for the first time and has new USB charging ports, is supposedly good enough to fit people 6.4 feet tall. We'll report on the truth of that at a later time. For hauling needs, all rear seats can be power-folded into the floor with the push of one button, and for viewing needs, the new panorama roof is 50 percent bigger.

The interior design is an even bigger departure from the existing model than the exterior. Mercedes-Benz finally ditches the busy, analog-looking vertical layout for a super-modern luxurious horizontal presentation.

A massive digital display with side-by-side 12.3-inch instrument cluster screen and 12.3-inch touchscreen infotainment is available as an option and automatically makes the cabin a high-tech environment. Squared-off air vents sit below the screen, with a vertical line of metal switches below that. Mercedes-Benz gives the GLS a more rugged feel with the addition of two grab handles that flank the center console and touchpad infotainment controller.

Every GLS comes standard with the Mercedes User Experience (MBUX) and a suite of active safety systems. Furthermore, an Executive Rear Seat Package brings a seven-inch Android tablet with its own dock built into the rear center console.

From every angle and to the smallest degree, the new GLS improves on what was already one of the best values in the large SUV market. It goes on sale in late 2019, and we fully expect more variants to debut in the near future. 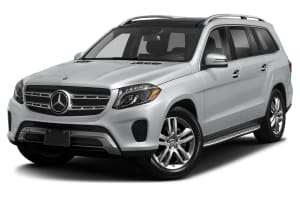