2020 Toyota Highlander teased with 3D art exhibition ahead of NYIAS

Next-gen crossover gets an edgy art-world treatment before debut

Chris Chin
We're coming up on the annual New York International Auto Show, and Toyota is brewing up an all-new, fourth-generation 2020 Toyota Highlander crossover. But instead of revealing it in a typical manner involving a press release and some stock photos of the car, the Japanese auto giant decided to do something different this time around.

Toyota teamed with augmented reality artist Michael Murphy for a unique art exhibition to showcase this new Highlander. Murphy is known for his illusionary and anamorphic 3D art exhibitions and sculptures, which manipulate lighting and shadows to play on human visual perception.

He essentially takes what is typically perceived as a two-dimensional picture and converts it into a three-dimensional space. For instance, while directly looking at his display for the 2020 Highlander head-on, one can also see the side profile. Step to a different angle, and Murphy's display reveals that the exhibition comprises 200 individual pieces, specifically placed and suspended in the air to create a three-dimensional spectacle.

Video of the installation is above. Below is a time-lapse showing how it was constructed.

Murphy became known for his sculptures when he converted portraits of former President Barack Obama into a three-dimensional exhibit in 2007, 2008 and again in 2012.

The current Toyota Highlander has been with us since 2013, so it's due for a replacement. Toyota's bread-and-butter midsize crossover is one of its bestsellers, so it should come as no surprise that the new model looks almost the same as the outgoing one, taking a "don't-fix-what-isn't-broken" approach.

Not much is known about the new Highlander, due for a launch in the coming months as a 2020 model. Like the current model, it undoubtedly it will come as both traditional internal combustion and as a hybrid, the latter perhaps debuting a bit later. The outgoing model comes with a lethargic 2.7-liter naturally-aspirated four-cylinder, Toyota's venerable 3.5-liter V6, or with Toyota's signature 3.5-liter V6-based Hybrid Synergy Drive.

Toyota will also tease the new Highlander with a drive-by video projection display throughout New York City leading up to its reveal at the Jacob Javits Convention Center next week. So stay tuned for further details. 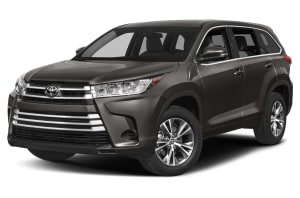