Before the Golf was ready, VW made a semi-modernized air-cooled Beetle

Volkswagen started selling air-cooled Type 1 Beetles in the United States in the late 1940s, when the car's 1930s design was already somewhat antiquated. By the early 1970s, VW had to do something to help the Beetle compete until the modern new Golf could go into production, and so the Super Beetle was developed, and sales began in the 1971 model year. I still see quite a few Super Beetles during my wrecking-yard travels these days, considering the age of these cars. Here's one in a Denver-area yard. 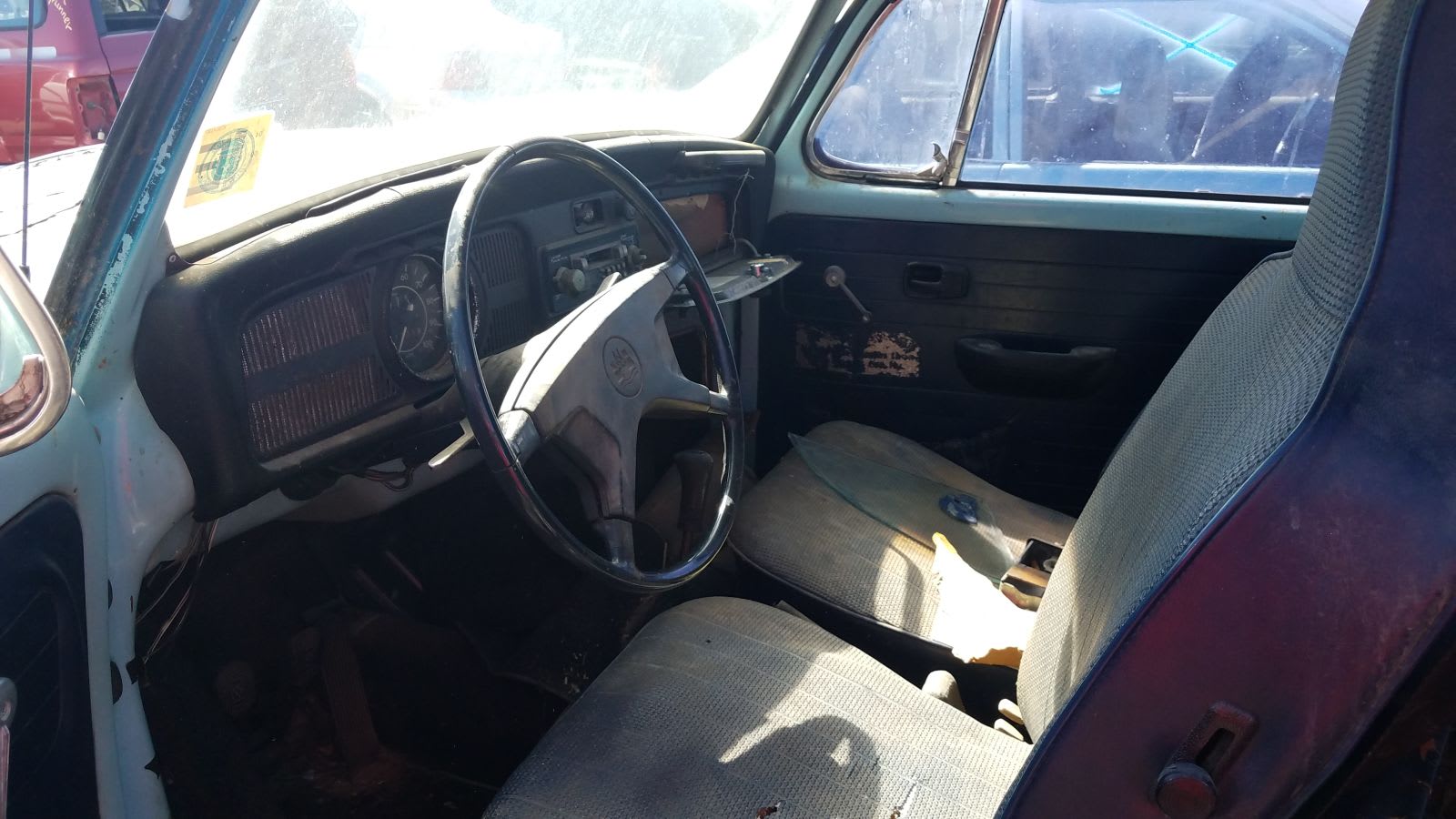 The build tag says this car came off the Wolfsburg assembly line in June of 1971, but it has the engine lid and steering wheel from a '72-up model. You Volkswagen experts are free to debate the actual model year of this car; perhaps VW really was building cars six months ahead of the model year, or maybe a lot of mix-and-match parts-swapping over the car's long life resulted in later parts going on a '71. 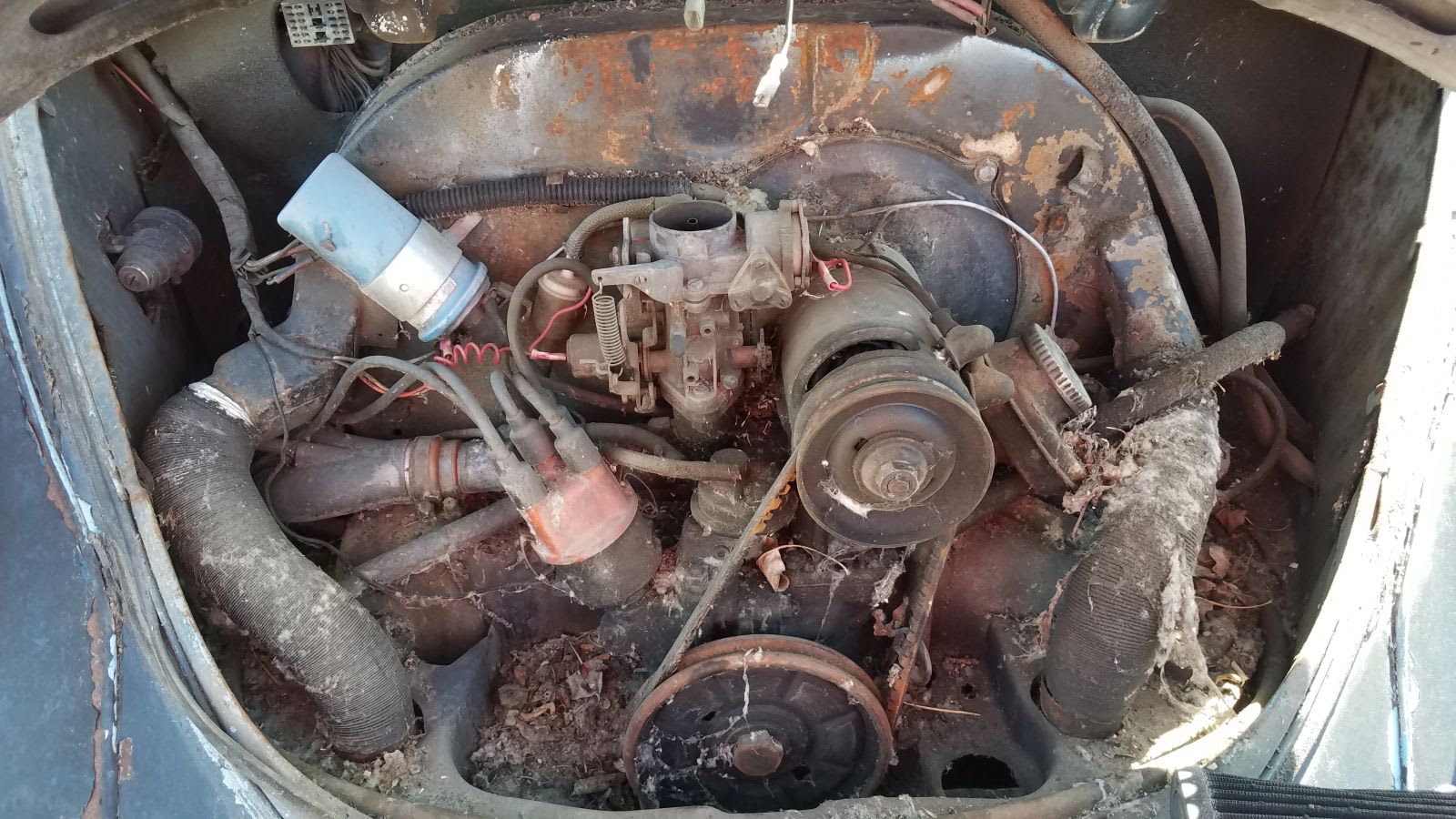 The Super Beetle differed from its regular Beetle sibling (cousin?) from the windshield forward, with a different front body and McPherson struts replacing the old torsion-bar suspension. In back, the Super got the same 60-horse 1600cc air-cooled boxer engine that went into non-Super Beetles. This one looks like it had a decade or two to gather rodent bedding in the engine compartment before it took its final road trip ... to its doom. 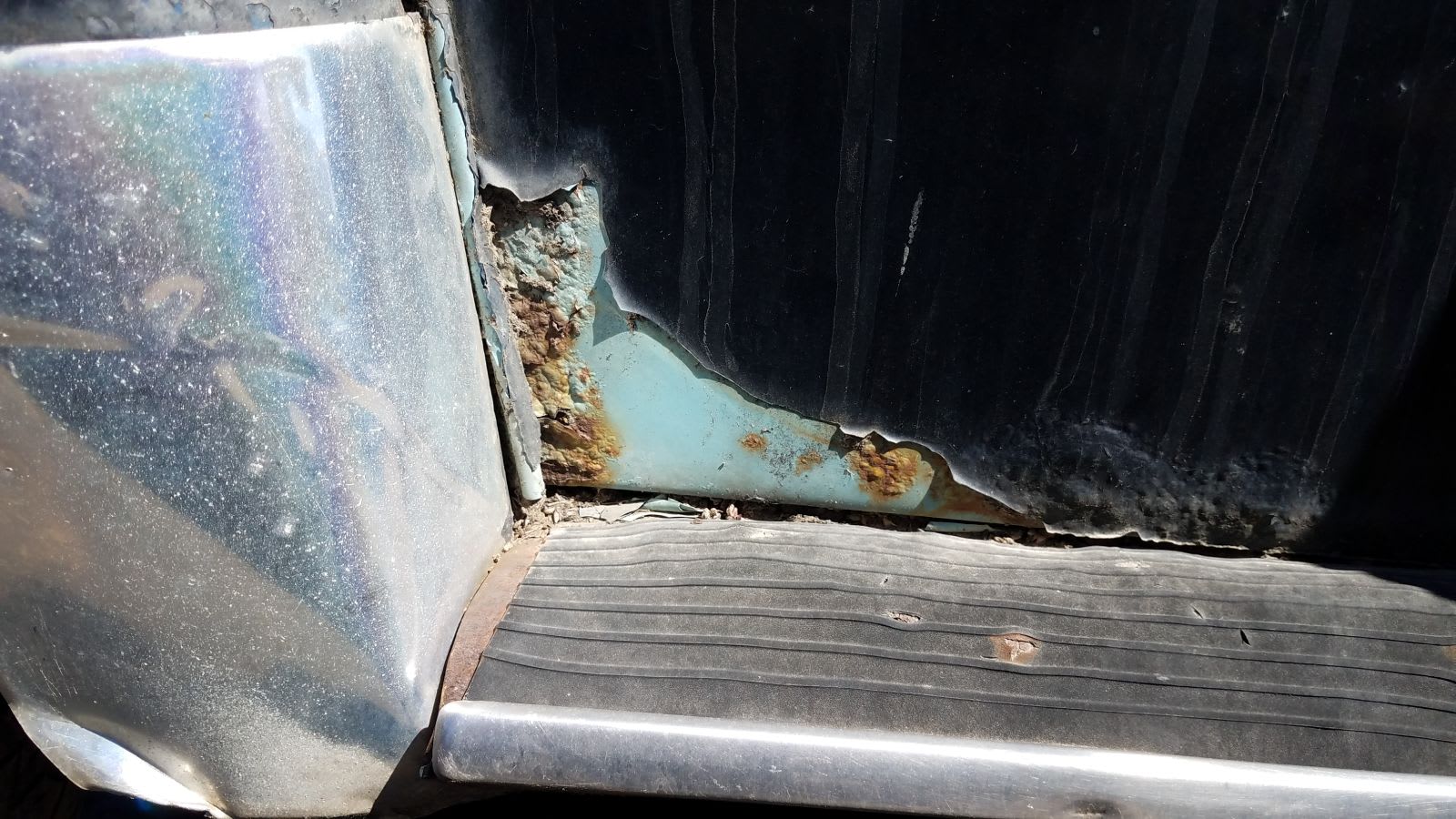 Cars don't rust much in Denver, but air-cooled Volkswagens could manage to rust in the Atacama Desert. This one could be restored, but air-cooled VW freaks tend to avoid the Super Beetles. In fact, I see at least a dozen junked Super Beetles for every junked regular Beetle, though many more of the latter were sold here. 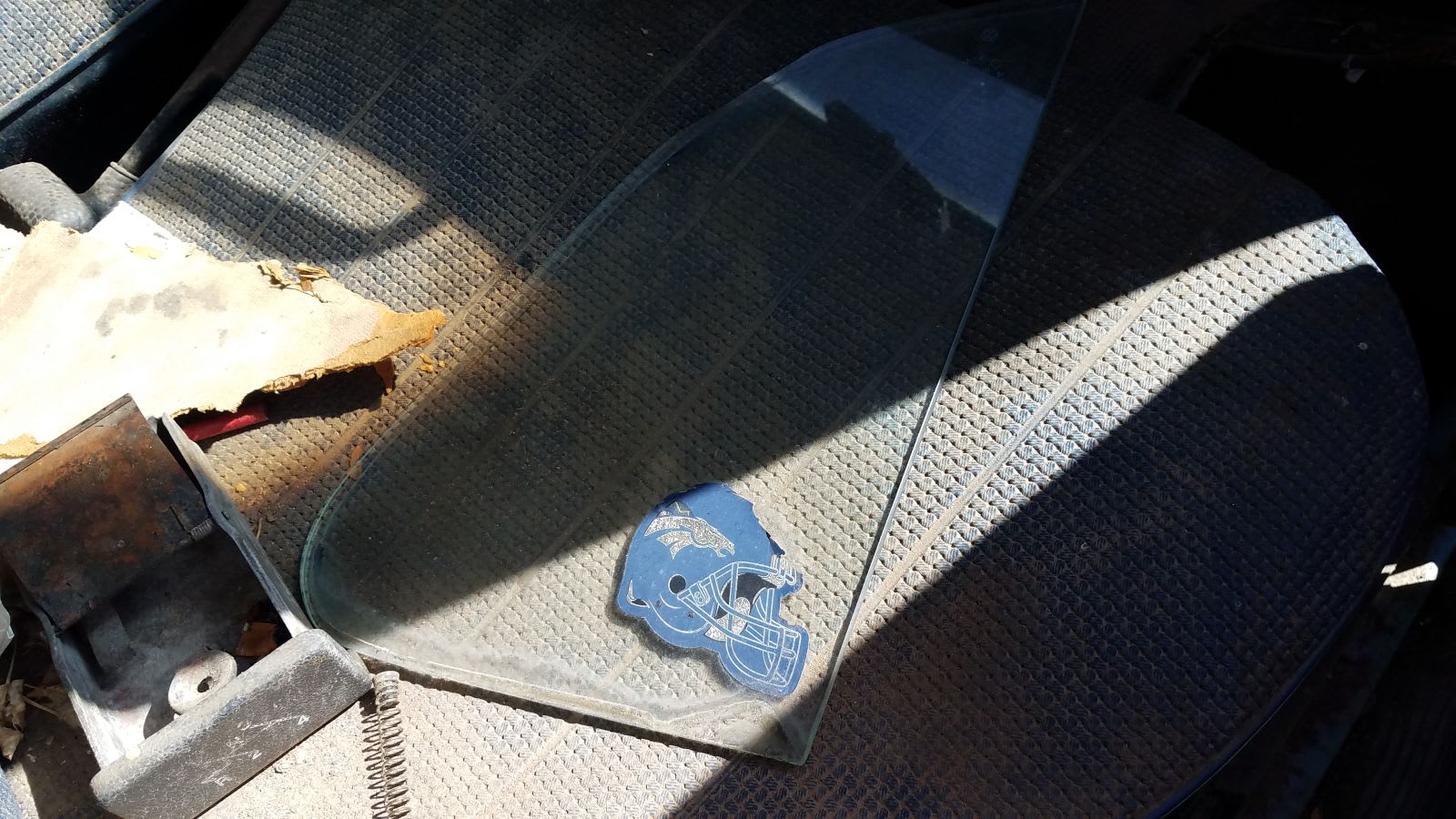 This one lived in Colorado for many years, if not its entire life. There are 1990 Broncos stickers here and there, plus Denver County smog-inspection tags from 2000. 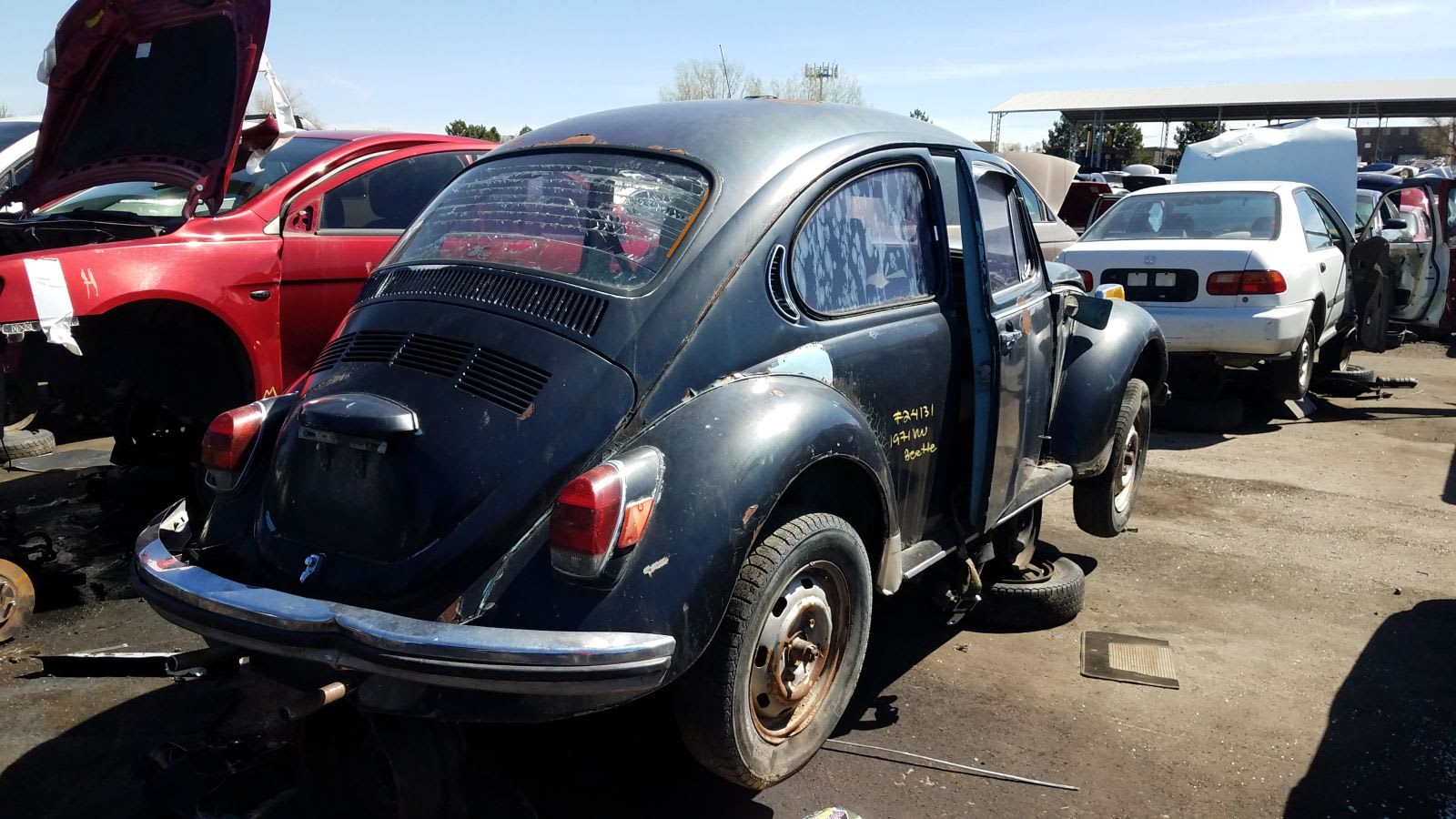 I have owned and daily-driven both types of air-cooled Beetles, including a genuinely idiotic '58. For all its alleged modernization, the Super Beetle didn't seem to drive any differently from the regular Beetle; both types featured the "traditional" Beetle numb, heavy steering and eagerness to flip onto the roof under not-very-extreme maneuvering. Still, much affection for these cars remains in my heart, and it saddens me a little to see one headed to the crusher.


VW of America didn't pitch this car as radically new, and there was no need — Beetle buyers tended to avoid chasing the latest vehicular fashions back then.