Company first: A CEO who's neither German nor an engineer

FRANKFURT — Daimler named research chief Ola Kaellenius as its next CEO on Wednesday in a succession plan that promotes a raft of tech-savvy managers at its Mercedes-Benz car brand and also seeks to install long-serving CEO Dieter Zetsche as chairman.

The German automaker said the plan would provide certainty on future leadership at a time of upheaval in the car industry, though some commentators questioned an arrangement they said could leave Zetsche as a back-seat driver.

Daimler said the 49-year-old Kaellenius would become chief executive in 2019 and the 65-year-old Zetsche would, if shareholders approve, become chairman of the supervisory board in 2021, following a standard two-year cooling off period.

The elevation of Kaellenius, a Swede who often wears jeans and sneakers and attends tech conferences, marks the first time the 132-year-old Stuttgart-based inventor of the modern automobile will be headed by a non-German CEO without an educational background rooted in mechanical engineering.

Currently Head of Group Research and Mercedes-Benz Cars Development, Kaellenius has helped Zetsche prepare for a new era of developing electric and self-driving cars at a time when Germany's auto industry faces competition from new rivals like Waymo, Tesla, Byton and Nio emerging from the technology sector.

"With Dieter Zetsche's intended appointment as Chairman of the Supervisory Board, we are ensuring continuity for the sustained success of Daimler AG," Daimler's current chairman Manfred Bischoff said in a statement.

"In Ola Kaellenius, we are appointing a recognized, internationally experienced and successful Daimler executive." 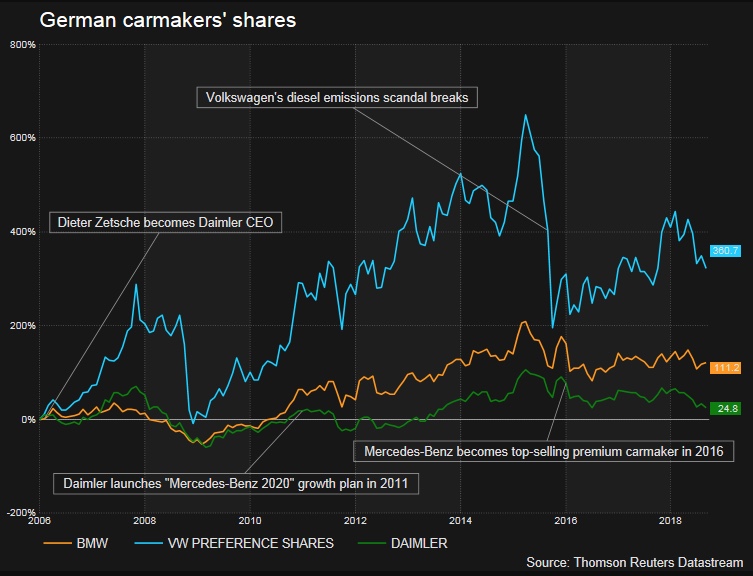 Zetsche, with his distinctive white mustache, took the helm at Daimler in 2006 and oversaw the launch of a string of new models that helped Mercedes to eventually overtake German rivals BMW and Volkswagen's Audi to become the world's biggest premium carmaker by sales in 2016.

Kaellenius joined the company as a trainee in 1993. With a qualification in finance and accounting from the University of St. Gallen in Switzerland and international management from the Stockholm School of Economics, Kaellenius has worked to introduce Silicon Valley management techniques at the carmaker.

Together with Zetsche he oversaw an effort to sweep away layers of bureaucracy and encourage a more experimental approach to new products, changing a culture often stymied in strict hierarchies and meticulous planning.

A major change at Daimler is to empower low level employees to generate business ideas and to allow departments to fund an idea even if it is not clear what products will result from the spending. Having a perfect "specification sheet" used to be a precondition for any investment.

Daimler said Zetsche would step down from his positions on Daimler's management board and as head of Mercedes-Benz Cars, effective at the end of the annual shareholders' meeting on May 22, 2019, and Kaellenius, would then be appointed as CEO.

"It is good that Daimler is providing clarity on the succession issue early on," said Ingo Speich a fund manager at Union Investment.

Markus Schaefer, currently head of Production and Supply Chain Management, who has transformed Daimler's Mercedes factories by linking them up digitally, will succeed Kaellenius as Head of Group Research and Mercedes-Benz Cars Development.