More than just a de-roofed DB11. Much more. View All Specs
If you're not a car designer, chances are you've tried to draw a sportscar, and realized just how hard it is to get those proportions just right. One false line, and the sleek coupe of your imagination looks like a kumquat. So you can imagine that transforming the striking V8-powered Aston Martin DB11 coupe into an equally stunning Volante ragtop was harder than it looked, a task which required Aston designers and engineers to nip and tuck everything past the windshield.

"There were lots of healthy, heated debates," lead designer Julian Nunn says of how the DB11 Volante – fancy speak for convertible – was packaged. As it sits before us on a brisk winter morning in Southern France, the British drop-top has a sleek, fleet look thanks to the elegant rake of its nose, the sharp arc of its roofline, and the taut contours of its derriere.

Aston's designers nailed the proportions – it's a stunner. How they got there was a game of millimeters, starting with a minuscule lift of the haunches to accommodate the eight-layer folding soft top. To soften the look of those lifted surfaces, the wheel arches are faceted slightly inboard, lending them more depth and dimension. The convertible loses the air vent at the rear, since there's no roof to create lift; as such, the so-called AeroBlade feature which ducts air through the C-pillar is also gone. But the rear spoiler remains, automatically deploying for downforce with a speed-dependent algorithm based on driving mode. The stack height (that is, the vertical space occupied by the folding roof) measures 10 inches, the lowest in its class, which helps the DB11 achieve its graceful looks with the added benefit of keeping the center of gravity low. The top takes 14 seconds to lower, and will drop at speeds up to 31 mph. 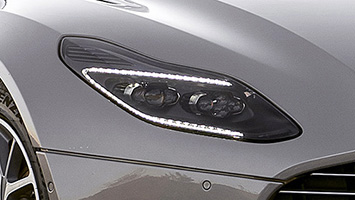 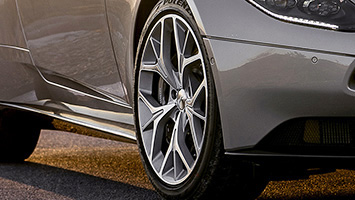 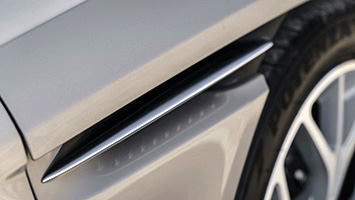 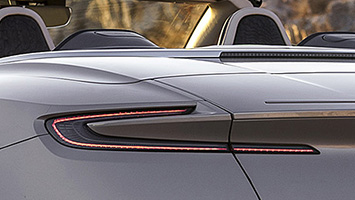 A Volante with its top down puts Aston's typically gorgeous cabin on full display: the door's brogued leather details surrounded by an improbably shaped veneer surround; the complex curvature of the veneer around the capacitive touch-sensitive infotainment interface; the improbably generous swaths of leather and Alcantara upholstering the dashboard and A-pillar surfaces. There's even, for the first time, veneer on the backs of the front seats. The tiny rear seats come with ISOFIX car seat attachments, a first in a Volante. I could go on about the DB11's unusual and intriguing aesthetic choices, but I've also got a persistent gripe with the electronic instrument cluster. Though it works well, with a data-rich display and crisp graphics, something is lost by abandoning the jewelry of conventional gauges, especially in the abandonment of Aston's traditional counterclockwise-rotating tachometer.

Regardless, there's also an undeniable specialness to the cockpit. Push the engine start button and bring the AMG-sourced 4.0-liter twin turbo V8 to life, and you'll notice a customized intake and exhaust sound that, to a familiar ear, betrays its AMG origins. The 503 hp, 513 lb-ft mill has lost its dry-sump oiling system, but it's still torquey and smooth, pulling strong from low rpms and charging hard as it reaches a soft rev limiter at 7,200 rpm. Drop the top in Sport and Sport + modes and the engine note takes on a considerably more aggressive tone, barking with unburnt fuel pops and sharp rev-matched blips from the ZF-sourced eight-speed automatic.

In motion with the top up, the DB11 operates quietly and quickly, adhering to its grand touring roots by delivering a controlled but supple ride in GT mode. Select Sport or Sport + via the steering wheel-mounted button, and the adaptive dampers stiffen accordingly along with steering feedback and throttle response, offering a noticeably firmer ride that amplifies road irregularities and makes the DB11 feel smaller and more maneuverable in the corners. 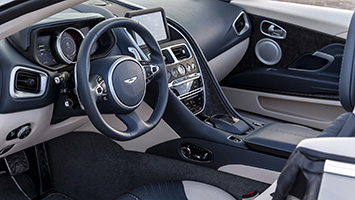 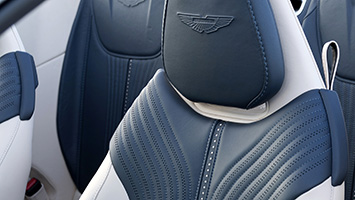 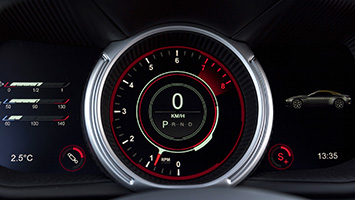 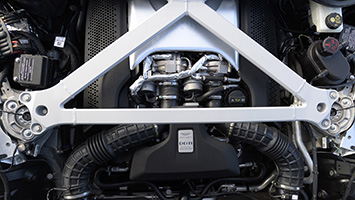 The DB11 sprint to 62 mph in 4.1 seconds, and can reach a terminal velocity of 187 mph. There's a general feeling of eagerness and capability when driving the DB11, with the engine dishing up copious thrust throughout the powerband. And there's a great deal of chassis capability during most conditions we encountered while maneuvering through the Route Napoleon's famously tight corners; torque vectoring helps aim the nose in the right direction, and the engine's rearward position makes the 4,133 pound car rotate. The steering won't knock you over your head with feel, sensations which are likelier saved for the upcoming V8 Vantage, a car designed to go head-to-head against the Porsche 911. The prevailing mood here is rarified restraint, one that isolates the rudeness of the world's imperfection while enabling swift, graceful transport. Also appreciated is the hush within the cabin during high speed runs; fold down the retractable windscreen behind the front seats, and you'll get a blast of turbulent air that reveals just how much noise you're being shielded from.

As effectively as the DB11 Volante acquits itself on squiggly pavement, compromises from the open-air conversion also become evident at higher speeds. Due to the myriad of chassis stiffening components, a total of 242 pounds were gained on top of the coupe, which senior vehicle dynamics manager Ian Hartley says were part of the reason we likely won't see an open-air V12 version.

"We never say never, but a V12 is not in the plans," added Aston's PR flack, politely. 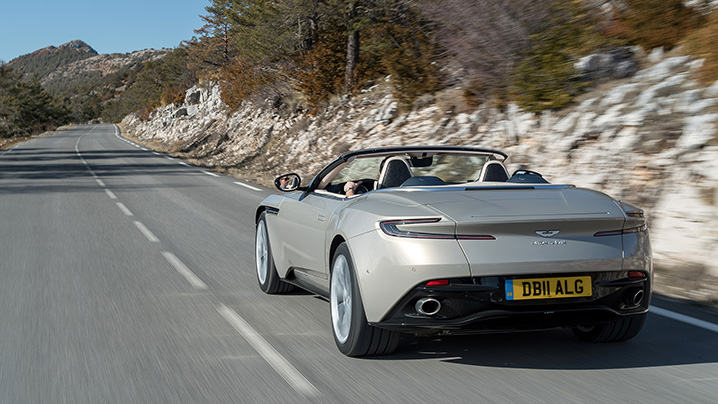 That said, quite a bit of fine tuning was required in order to help the DB11 handle the extra, redistributed weight. With a weight balance that shifts rearward, from 49 percent front and 51 rear to 47/53, the Volante required slightly stiffer rear spring rates and a rear rollbar that's just four tenths of a millimeter thicker, an expense which Hartley admits required a bit of a fight to justify. Though the DB11 behaves rather well at moderate and elevated speeds, when you approach around 80 percent of the handling limits, the damping – specifically compression – seems a bit too soft to provide the amount of confidence you'd want to explore those last 20 percent of the car's capabilities. Despite the fact that the DB11's GT roots reveal themselves more clearly at these elevated rates of travel, there's never any doubt the six-piston, 15.7-inch brakes will deliver strong stops with enough feedback to modulate their power at the top of the pedal stroke, the most crucial part of threshold braking.

To put the Volante's performance into perspective, this is Aston's replacement for the DB9, which is the softest and most road trip-friendly offering in the lineup. That it can run the Route Napoleon, which snakes through the Provençal mountains, with as much athleticism as it does speaks volumes to Aston's newfound focus on performance.

Even so, the DB11 Volante is more of a lifestyle car than its coupe counterpart – and that shouldn't be a surprise. Performance-minded drivers won't have much to gripe about if they remember that the all-new V8 Vantage comes in early March, which promises to redefine the driver-focused edge of the 105 year-old brand. We'll be track testing the new car, and needless to say, we can't wait. 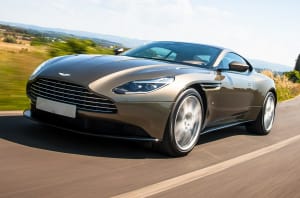 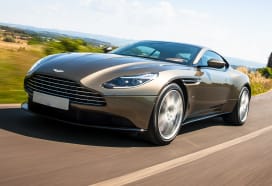