What's in a name? In the case of the Ferrari 812 Superfast, a numerical reference to its 800-(metric) horsepower, 12-cylinder engine and a not-so-subtle hint at its capability for extreme rates of travel. Only Ferrari, notorious for joyously naming its flagship " LaFerrari," could get away with the moniker. But once you get past the super-obvious nomenclature, it becomes hard to argue with this on-the-nose model name.

If you're lucky enough to have sampled the standard F12 and one of the 799 F12 TDFs offered to Ferrari's most loyal clients, you've got a pretty good idea of the 812 Superfast's personality, which involves a blend of the TDF's edginess and the F12's comfort and usability. Even within the rarified world of supercars, the 812's athleticism is impressive despite its veil of approachability. More power, to the tune of 789 horsepower (versus the TDF's 769) combined with weight loss of 132 pounds make it the highest-performance standard production model Ferrari in history. (For reference, the TDF trims an even more impressive 242 pounds, ditching niceties like sound insulation.) Along with mechanical and aerodynamic improvements, the elevated power-to-weight ratio enables it to hit 60 mph in 2.8 seconds and reach a top speed of 211 mph. 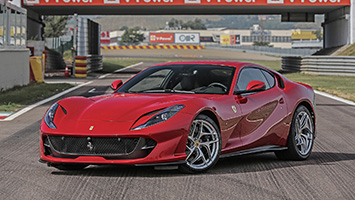 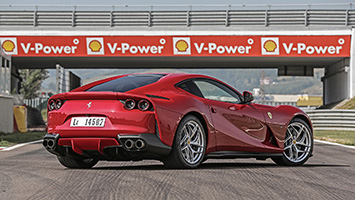 The main attraction is, of course, the 6.5-liter V12, which boasts 75 percent new parts and undergoes a series of mods to raise its output while (thankfully) retaining its naturally aspirated soul. A stroked version of the F12's 6.3-liter mill, the V12 features new pistons, new con-rods, a reinforced crankcase, and a trick new direct-fuel-injection system that runs at a staggering 5,076 psi. The system is capable of changing the shape of fuel droplets as they're injected into the combustion chamber, adjusting for around-town drivability or balls-to-the-wall performance. A revised air intake system incorporates a new plenum and bigger air inlet with wider throttle valves for better breathing. Silver lining: CO2 emissions have been reduced thanks to the new injection system and reduced friction from new 5W50 engine oil.

Each of the seven-speed dual-clutch transmission's gears has been shortened, which has the virtual effect of producing an extra 50 horsepower – as if the mighty V12 was wanting for oomph. Upshifts can now happen 30 percent quicker, and the engine's ability to rev-match for downshifts occurs 40 percent faster. Aiding the 812's performance are revised aerodynamic profiles via a panoply of vents, ducts, vortex generators, and diffusers. With the goal of reducing drag while maintaining downforce, airflow is manipulated via passive elements at the front diffusers and three active flaps at the rear.

The powertrain tweaks seem tiny compared to the big news in the chassis department: Ferrari's first use of electric steering (EPS). What took so long in an era when performance brands like Porsche are now several generations into their EPS technology? Ferrari says it considered the tech for the 488 GTB, but it wasn't dynamically satisfying enough to warrant production. With so many systems digitally interfacing in the 812 – from traction/stability control and magnetorheological dampers to the electronic differential – Ferrari says it was finally time for the steering to became part of that dialogue. "The steering system now has a seat at the vehicle dynamics table," says lead Ferrari test driver Raffaele de Simone, which begs the inevitable question: Is the steering feel good enough to warrant the change? More on that later. 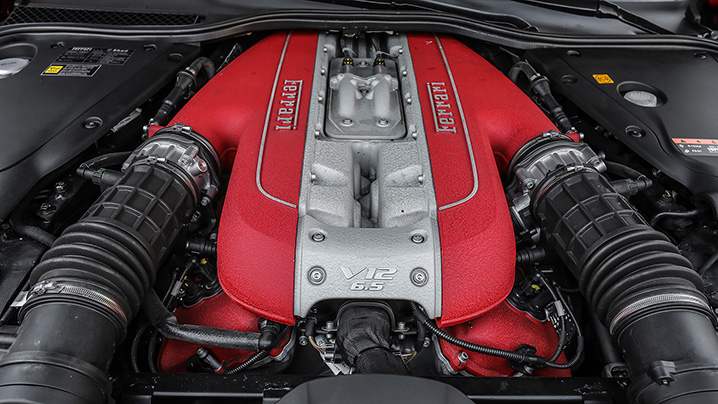 Unlike Ferrari's famously purposeful mid-engine cockpits, the cabin of the front-engine 812 Superfast feels spacious and fairly airy, with good forward visibility. Inherited from the GTC4 Lusso is the so-called twin-cockpit feature, which adds an 8.8-inch touchscreen above the glove box displaying navigation, drive mode setting or instrumentation info. The system works well enough and can easily be switched off, leaving a dark panel surface that blends well with the leather-lined interior. But the hot seat is the one behind the prancing horse-clad steering wheel.

The central focus from the driver seat is a large yellow tachometer that sits dead ahead. The dial is a reassuring reminder of Ferrari's performance intentions despite the 812's distinct grand-touring elements – the front-engine configuration, the surprisingly roomy seats, and the refined infotainment system inherited from the Lusso that includes twin hi-resolution five-inch screens.

Bring the massive V12 to life via the steering wheel-mounted start button, and the 812 fires with a deliciously loud thrum. The titanium exhaust system is slightly quieter at lower rpms in Sport mode due to sound regulations, but in the Race setting the system opens up to the F12's more raucous volume levels. Set the manettino to Sport, and the engine's tremendously flexible powerband makes it easy to lope around town with minimal gearshifts. There's incredible pull from low rpms thanks to the engine's Mack Truck-like displacement and continuously variable intake, and with 80 percent of torque available from 3,500 rpm the run to max revs at 8,900 rpm is pin-you-to-your-seat giggle inducing. 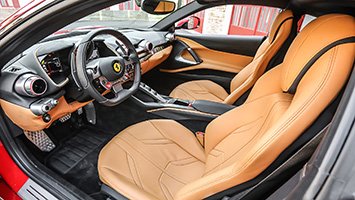 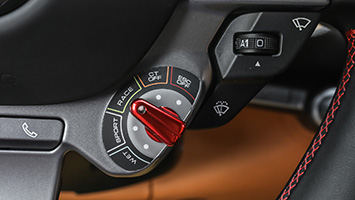 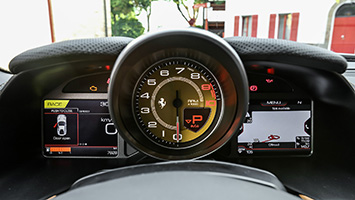 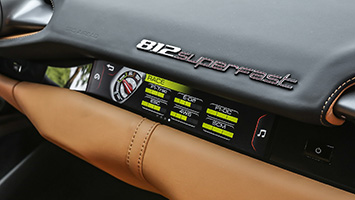 Up the ante by clicking the manettino to Race, and you'll still get enough electronic intervention to keep you from kicking the tail out; I endured one well-mannered lap at Ferrari's Fiorano test track before switching to the CT off setting, which enables tail-happy corner sliding with a safety net of stability control. This is hero mode at its finest: With so much power so easily accessed at your right foot, flawlessly executed power slides makes you feel like a certified drift master. The task requires more daring than ever because the 812's four-wheel steering system adds stability at higher speeds; the act feels even riskier due to wider front tires that dig in more firmly, having grown from 255 mm to 275 mm (the rears remain at 315 mm).

While the 812's power feels eminently manageable thanks to the naturally aspirated engine's intuitive throttle response, it isn't until ESC is switched off that the truly beastly nature of the car emerges. In what we'll call Man-Up Mode, the 812's personality shifts; the V12 responds without the politeness of electronic intervention, easily charging the vehicle ahead and even more easily sliding the tail out. More mechanical grip requires higher corner speeds to break the Pirellis' grip loose; when that happens, quick countersteer is in order to keep the front end in tandem with the rear. Incidentally, Ferrari engineers say that during this state of oversteer, the electronic steering system is designed to slacken the steering in one direction, just like when the tires break loose with a hydraulic setup. The real-life feeling is appropriately realistic. Though the electronic steering feels slightly heavier and incrementally less lucid and transparent than the outgoing setup, the feedback is communicative enough not to raise significant red flags about its artificiality. There is, most certainly, a difference between old and new, but the difference is not strong enough to warrant storming the castles of technology, especially when they indeed have finally become a part of the vehicle's ever-complicated electronics systems. 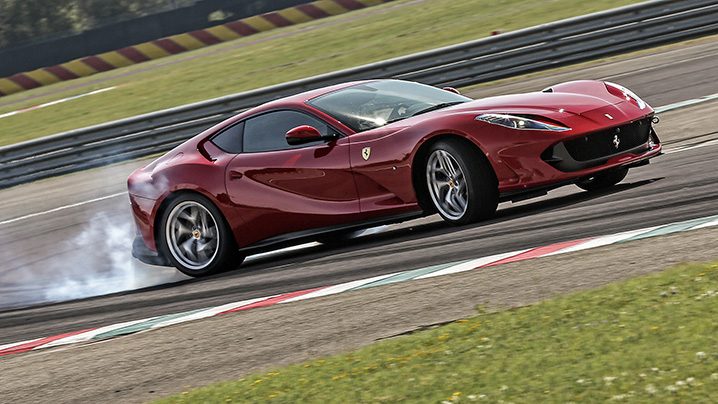 Having explored the 812's limits on the track, the road becomes an appropriate place to dial back the drama and explore the grand-touring side of the car's personality. That said, the V12 makes it all but impossible to switch on the Bose-powered stereo system, which is just as well. The mellifluous internal-combustion song is all but impossible to ignore, as is the addictive feeling of thrust as it sweeps the tachometer up toward its 8,900-rpm redline. Leave the gearbox in automatic, and shifts are remarkably smooth and well-timed. Hit a twisty road and click the manettino to Race, and the shift strategy is just as good as you'll find on Porsche's near-perfect PDK system, holding the revs in just the right range for strong-spirited driving. When switched to manual mode, the shifts get a tad less smooth, but the feeling of control is unparalleled; there's virtually no lag between tactile input and cog swap, and a new feature enables the driver to hold down the left paddle during hard braking, which triggers multiple shotgun-quick downshifts. Neat.

In fact, "neat" just might be the operative word when piloting the 812 on twisty roads; despite its relatively lengthy 107-inch wheelbase and longish snout, the Ferrari manages to tackle switchbacks with zero drama. Ride quality is controlled and firm but never busy, and the so-called Bumpy Road setting offers a bit more compliance over the potholed bits. Even in the relatively restrictive Race mode, power is routed from the electronic differential to the road with seamless ease; no tire slip, no problem. And within the cabin, the mood is modulated because harnessing the engine's immense power is far less stressful than you might expect, thanks to the intuitive feedback from the throttle, brakes, and steering.

If you could sum up the predominant mood following a day of driving the Ferrari 812 Superfast, it just might be a feeling of supreme satisfaction. With an endlessly smooth and powerful V12 under the hood, an accommodating cabin, and surprisingly agility, the 812 manages to achieve superlatives across a seemingly improbable spread of the performance/comfort scatter plot: It's effortlessly quick, impressively athletic, and surprisingly comfortable. The only elements that seem to open themselves to criticism are abundance of slats and vents that break up the F12's otherwise sculptural shape, and a bit more plastic trim on the interior than befits a $335,275 car. Apart from those quibbles, there really isn't anything on the Ferrari 812 that isn't super.