Ducati's SuperSport is back, aimed at plugging a gap in Ducati's lineup missing since the model was discontinued back in 2006. The revival is positioned as a more accessible cousin of its Panigale line ― something you could take to the track on Saturday, tour with on Sunday, and ride to work on Monday without significantly compromising comfort, performance, or the brand's MotoGP-inspired styling.

That's a lot to ask out of one motorcycle. To find out how well the new SuperSport works in various riding situations, we took the model for a spin in Spain at the Circuito Monteblanco and the country roads outside Seville.

All 2017 SuperSport models get a 937cc, 113-horsepower engine, anti-lock brakes, quick-shift technology, traction control, and three digitally calibrated riding modes. The standard model will hit the showroom floor in April with a base price of $12,995.

For the track portion of our test, we focused on the $14,795 SuperSport S, which brings a fully adjustable set of Öhlins shocks front and rear. The S also comes standard with the Ducati Quick Shift ( DQS) technology (a $289 upgrade to the standard SuperSport) that allows for clutch-free gear changes. 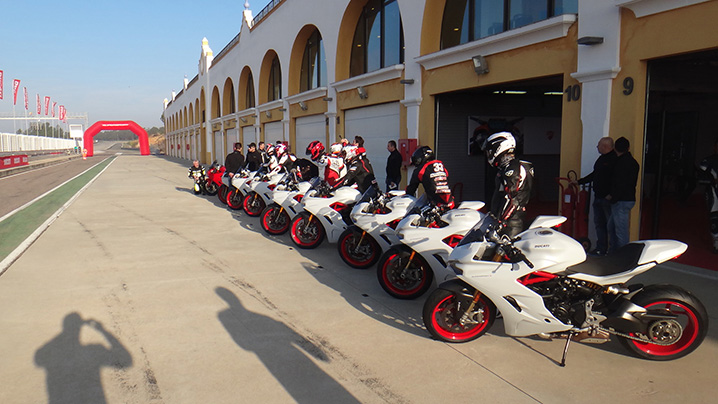 As we throttled the bike out of the pits, the SuperSport's first notable trait was its excellent low-end pull. Eighty percent of the bike's torque is available at 3,000 rpm, and the bike surges up and forward with a growl as soon you twist the right grip.

The technical Circuito Monteblanco course and my riding background created a good trial for the SuperSport's performance-meets-accessibility proposition. During the first track session, the bike was easy to ride, responsive and forgiving where my lines and braking in tight corners were definitely inopportune. The SuperSport's anti-lock brakes, traction control, and nimble maneuverability helped me correct for mistakes without any brake lockups or embarrassing white-line crossings.

On the track's straight I banged the Ducati through all six gears, finding more comfort over 130 miles per hour than anticipated. The motorcycle delivered an adrenaline-satisfying stream of power, while feeling safe and stable at high speed.

In between track sessions, the SuperSport's chief engineer, Giuseppe Caprara, guided us through its impressive list of options. Three different processors link the ABS, traction control, and engine settings, which can be easily adjusted through a button on the bar and the bike's digital instrument panel. Ducati's ride-by-wire electronic throttle control also offers three power delivery options for the 406-pound machine. 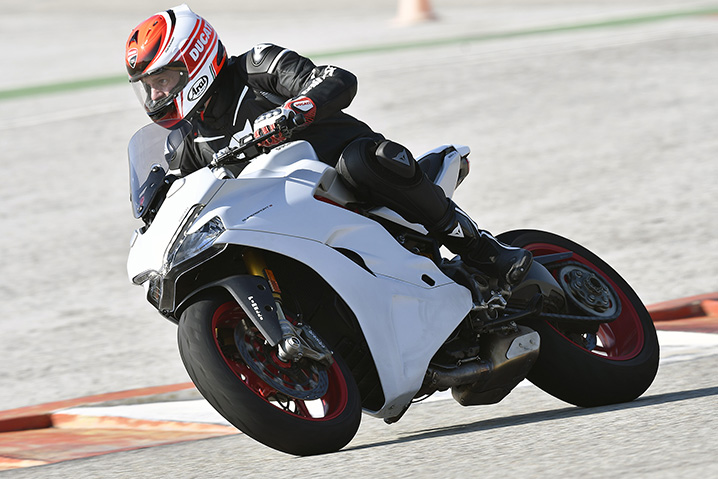 Caprara demonstrated multiple ways to configure the SuperSports's performance. For example, the Ducati Traction Control ( DTC), which syncs to sensors in the motor and rear wheel to control slippage, has eight different sensitivity settings. The bike can also run ABS on both brakes, only front or rear, or turned off.

After some riding tips from top Ducati test pilot Alessandro Valia, we headed out for another track session. To experiment with some of the bike's settings, we asked the Ducati mechanics to turn off the rear brake ABS, while keeping it on up front.

Greater familiarity with the SuperSport S and the track led to smoother and faster laps. We realized the value of Duc's tech options after carrying too much speed before a corner and locking up the rear wheel braking. Recovery came by applying more pressure to the ABS active front brake, which led me out of the skid to make the turn, rather than scuffing Circuito Monteblanco's landscaping. 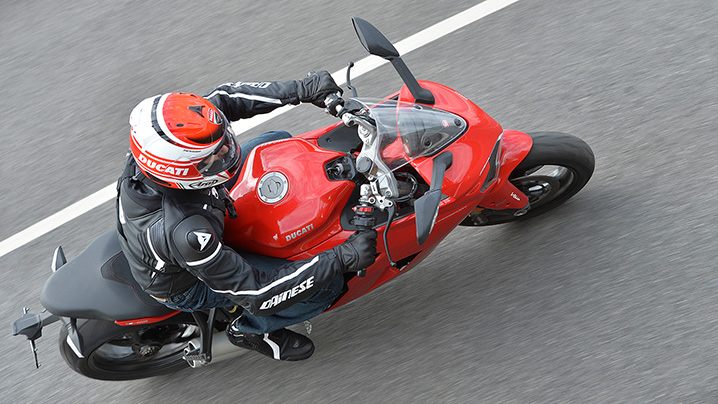 Next up was an 80-mile ride through Spain's Huelva province on the standard SuperSport set on Sport mode. We sped through a range of mountainous roads that varied between, twisty, narrow, straight, smooth, and poorly paved. The ergonomics of the bike worked well for all conditions, even with my 6-foot-2-inch frame.

Ducati's SuperSport is a very likable machine with solid power that starts down low, continues through the mid-range and finishes with a nice top-end flourish. It handles well, looks and sounds great, and performs equally well on the road and the track. We'd choose the S version, even with its $1,800 upgrade fee, in order to enjoy the bike's sweet technology, clutchless quick shifting, and the ability to customize it more specifically to our riding style.

That said, we definitely think the SuperSport's chassis and digital management system could handle an even stronger engine option, perhaps something along the lines of the 1200 Monster motor.

One of our fellow testers had a poignant observation. "The SuperSport is the motorcycle most sport riders could actually get the most out of and fully ride, versus the brag bikes they can't, but want to talk about." Fair point. For us, the new Ducati delivers both. The SuperSport got us riding fast and talking about it all the way back from Spain.