Greg Migliore
Alfa Romeo is poised to add a two-door version of the Giulia to its lineup, according to a report from Motoring out of Australia. The coupe could be called the Giulia Sprint and be revealed at the Geneva Motor Show, the website says. The Sprint name has been used on a variety of sporty Alfas, like the 1965 Giulia Sprint GTA shown above, over the years.

The move would broaden Alfa's lineup which currently stands at just the Giulia sedan and the hard-edged 4C sports car in the United States. The 2018 Stelvio SUV joins Alfa's portfolio this year. The company's five-year plan indicates two specialty vehicles will join its lineup in the coming years, though they're unspecified. An Alfa spokesman declined to comment to Autoblog on future product.

The Giulia two-door would likely share powertrains with its sedan sibling, which offers a 2.0-liter turbocharged four-cylinder making 280 horsepower and a turbo 2.9-liter Ferrari-derived 505-hp V6. The coupe would take aim at the Mercedes-Benz C-Class Coupe, BMW 4 Series, Cadillac ATS coupe, Audi A5, Infiniti Q60, and others. 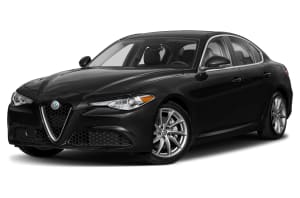